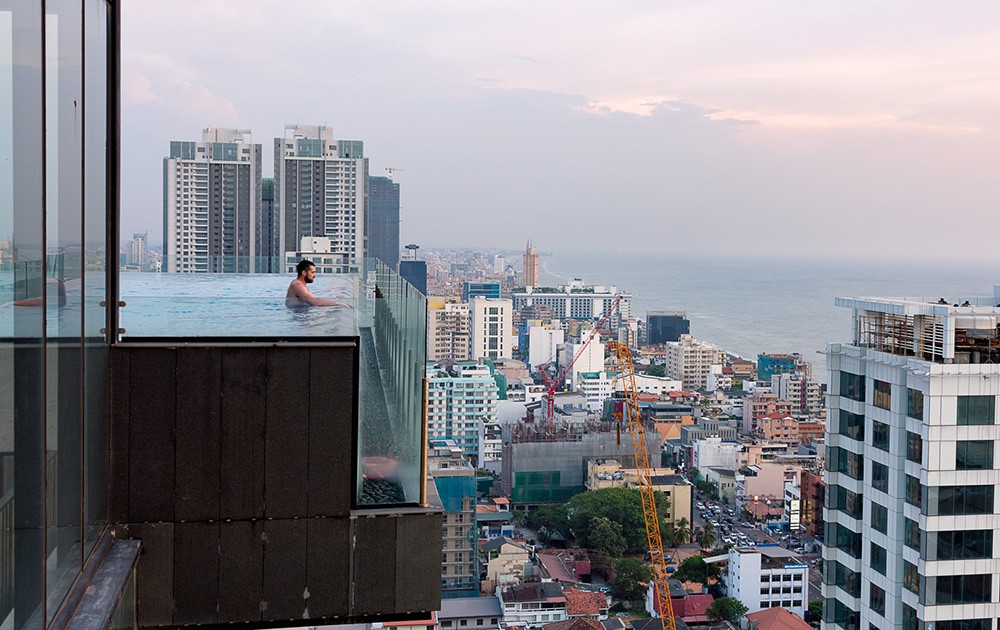 I have visited Sri Lanka several times and as I type this I am actually in Colombo myself. So that made me even more interested in finding out what it’s like to live in Colombo as an expat.

There are many expats living in Sri Lanka, and most of them are based in Colombo. But what attracts expats to Colombo?

In this Ask an Expat series I interview people living all over the world but outside of their home country.  I try to help paint an honest picture of the ups and downs of life abroad, share tips about moving to the place the expat now calls home, and information about what to see and do here. 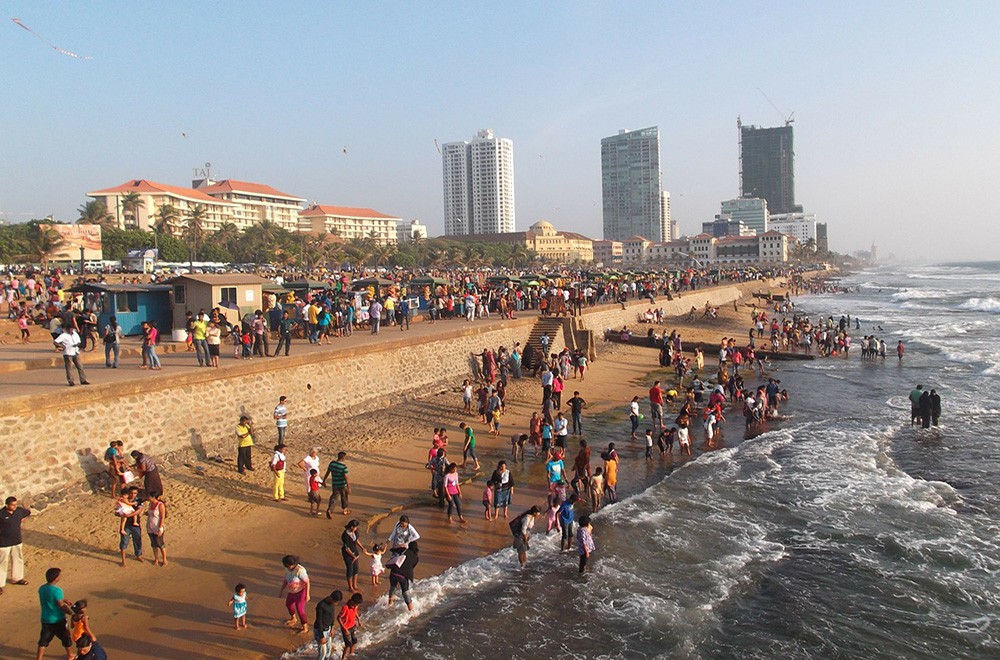 “A consultant of sorts, I have lived in various countries in Asia and Europe the last 7 years.

Nowadays I split my time between Asia and America consulting for various things. ”

Why Did You Move to Colombo?

“I didn’t necessarily move to Colombo as a choice, it was because of work. However, I have stayed after my work was done because of the country.

Sri Lanka is a funny place; a conundrum of sorts that is extremely dysfunctional. However, it’s the beauty and entertainment in that dysfunction that makes the country so intriguing.”

“I love that Colombo, and Sri Lanka overall, is constantly changing.

The skyline of the country from when I arrived to now is drastically different. The country is growing and changing.

However, there are very strong cultural ties that even with new developments and a huge influx of foreigners, the nation has retained.

Ultimately, my feelings about the country and the people are still the same as when I first arrived 5 years ago. For a country that has gone through 33 years of civil war and was completely abandoned and forgotten by the world, how happy the people are and not completely traumatized by seeing their friends and family being blown up in bombings, astonishes me.

One thing that the people here have taught me is to heal and move on and appreciate life for the present moment that you’re experiencing it.”

What Do You Dislike About Living in Colombo?

“As I said previously, the place is a complete dysfunctional conundrum.

The country will teach you patience because it’s ultimately island life here.

The country will teach you to be an aggressive driver. Otherwise you’ll just be stuck in one spot.

The country is still developing and at times it’s frustrating, however, it’s that rough around the edges charm that draws people in and that fascinates me about life in Colombo.”

What is Your Favorite Thing to Do in Colombo?

“Many people who visit the country skip Colombo. However, there’s a lot to do here.

My favorite thing to do in Colombo is to hang out with my friends in a garden restaurant or rooftop bar.

Colombo doesn’t have a heavy nightclub scene like most major cities. It has more of a chill hangout vibe that’s perfect for stress relieving lunches, or after work drinks.”

What is Your Favorite Place to Hang Out in Colombo?

“There are so many! It honestly depends on my mood and which group of friends I’m with.

You have Park Street Mews on Friday evenings which is usually packed as people congregate on the cobblestone walkway. You have your rooftop bars like Ozo, Ce La Vi, and Kaema Sutra terrace where you can enjoy the sea breeze, deep house music, and nice drinks.

Then there are the hidden gems like the Grand Oriental Hotel in the Fort, eating pizza on the sidewalk at Giovanni’s, the beach restaurants in Mount Lavinia Hotel, to even real authentic Chinese and Korean barbeque.

There are so many places to hang out and explore because there’s a new place opening up almost every week.”

What is the Expat / International Community Like in Colombo?

The expat community in Colombo is definitely growing.

The amount of foreigners here for business has drastically increased over the years and people come from all over the world.”

Any Tips for Moving to / Living in Colombo?

“Some businesses arrange apartments for their expat staff whereas others give an allowance and leave it to the individual to find a place, and some expats pay and arrange everything on their own.

You can find rentals in Colombo in the newspapers, which is a popular way for expats and locals to find accommodation. Additionally, check ikman.lk and lamudi.lk or check Facebook postings by doing a broad search of rentals in Colombo or of areas you want to live in, and the public postings will pop up.

One other tip about life in Colombo: don’t just stay in Colombo.

Like any major capital, the hectic business and work life can drain you. Recharge by leaving the country and taking an hour flight to the Maldives or drive a few hours to the hill country.”

Any Resources You Found Useful During the Process of Moving to and/or Building a New Life in Colombo?

“Social media is HUGE here, especially Facebook and Instagram. Use it to find out about local events, local businesses and to make connections with other expats in Colombo.”

Is There Something You Just Have to See or Do When You Are in Colombo?

“Don’t be afraid to venture out to a kade (small mom and pop restaurant) and enjoy the local rice and curry.” 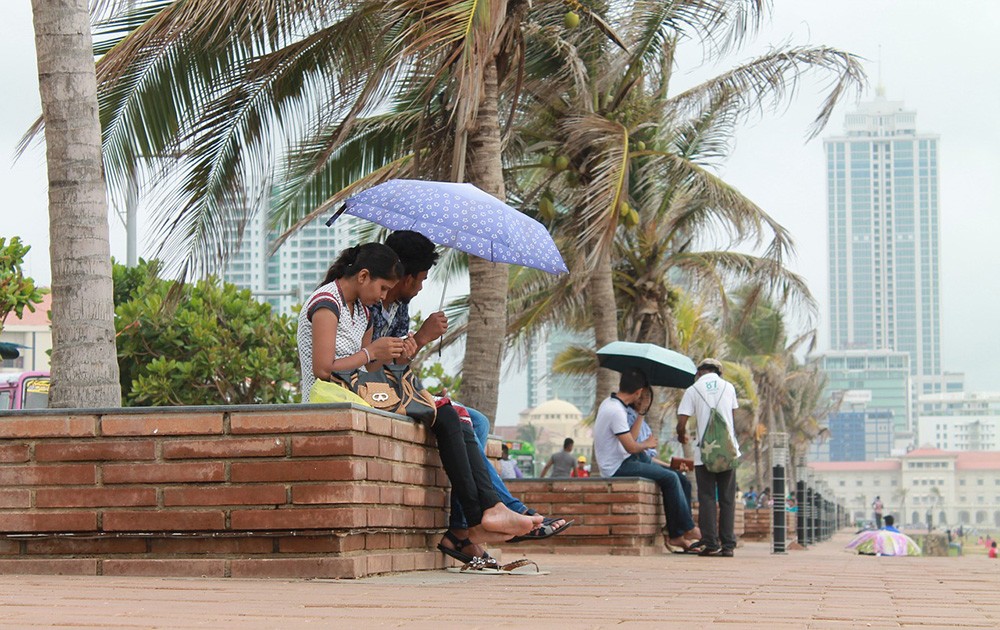 The city has a long history as a port on ancient east-west trade routes, ruled successively by the Portuguese, the Dutch and the British. That heritage is reflected in its architecture, mixing colonial buildings with high-rises and shopping malls.

Colombo is Sri Lanka’s largest and most developed city. Besides its colonial buildings the city offers historical monuments, beaches, fine dining, and shopping.

Galle Face Green is where the locals gather on the weekend to enjoy the cool breeze from the Indian Ocean and a stroll along the promenade. Nearby are temples, mosques, and churches catering to the diverse population of the city.

Colombo is the starting point for most people traveling around Sri Lanka, but many don’t stay in the city for long.

The heat in Colombo is often excruciating, and traffic and pollution intense.

Like this article about expat life in Colombo? Pin it! 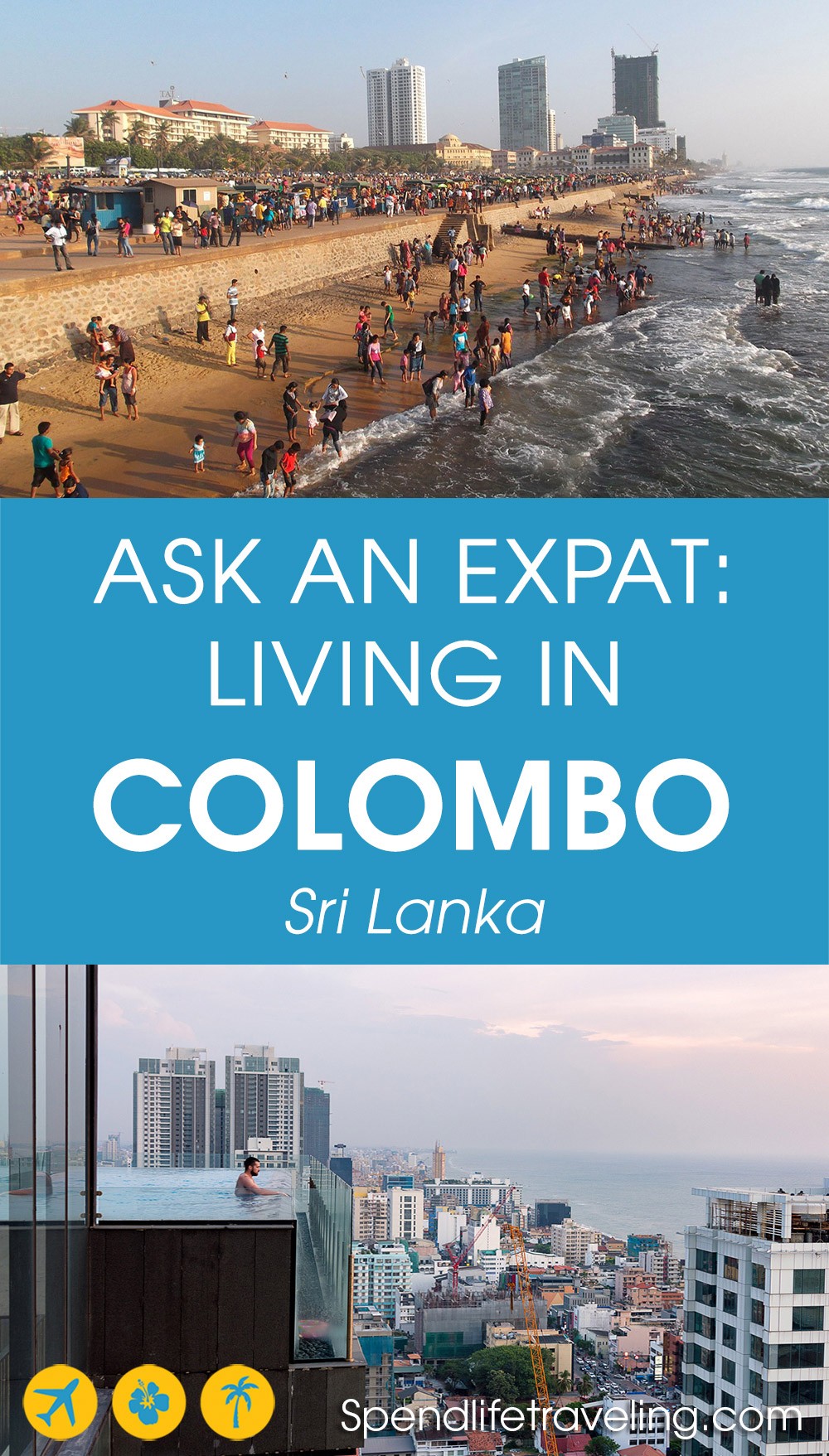 8 thoughts on “Ask an Expat: Living in Colombo, Sri Lanka”