Looking for interesting facts about Dubai? Then continue reading!

Last month I spent a few days in Dubai. It was my third trip to this Emirate and I have to say, the more I get to know it, the more enjoyable I find this place.

Yes, it’s artificial, over-the-top and a bit strange to see such a modern, air-conditioned city in the middle of the desert.

But, spending some time in Dubai with a friend who lives in the city made me see much more of it than just the tourist attractions and I have to admit, it is a city where you could lead a very comfortable life!

Dubai, a small desert town only 50 years ago, has developed into a vibrant city that is a business and cultural focal point in the Middle East and a popular tourist destination.

Also Read: Things to Do in Dubai – A Travel Guide With Insider Tips

What is Dubai Known For?

Dubai is known for luxury shopping, modern architecture, and a lively nightlife scene.

Burj Khalifa, the tallest building in the world, dominates the skyscraper-filled skyline.

Real Estate and tourism drive the economy, and there seems to be a never-ending development of innovative and over-the-top projects.

Dubai is unique and therefore I wanted to share some Dubai facts and information with you.

Facts About Dubai – From Funny to Crazy & Shocking!

The interior of the Burj Al Arab is decorated with around 1,790 square meters of 24-carat gold leaf.

With that, you could cover 46,265 Mona Lisa paintings!

In fact, the amount of rock and sand used here could form a 2 meter wide (6.5 feet) wall that would circle the globe three times!

3. The Police Force in Dubai Spends More on Each of Their Super Cars Than It Costs to Send a Child to College in the USA

An interesting fact about Dubai: Dubai’s police force uses supercars to impress tourists and show how “classy” the city is.

And they hold a world record for the fastest police car; a Bugatti Veyron which they purchased for US$ 1.6 million!

In comparison, attending New York University, the most expensive college in the USA, costs about $248,000 for four years!

4. The Tallest Building in the World is Located in Dubai 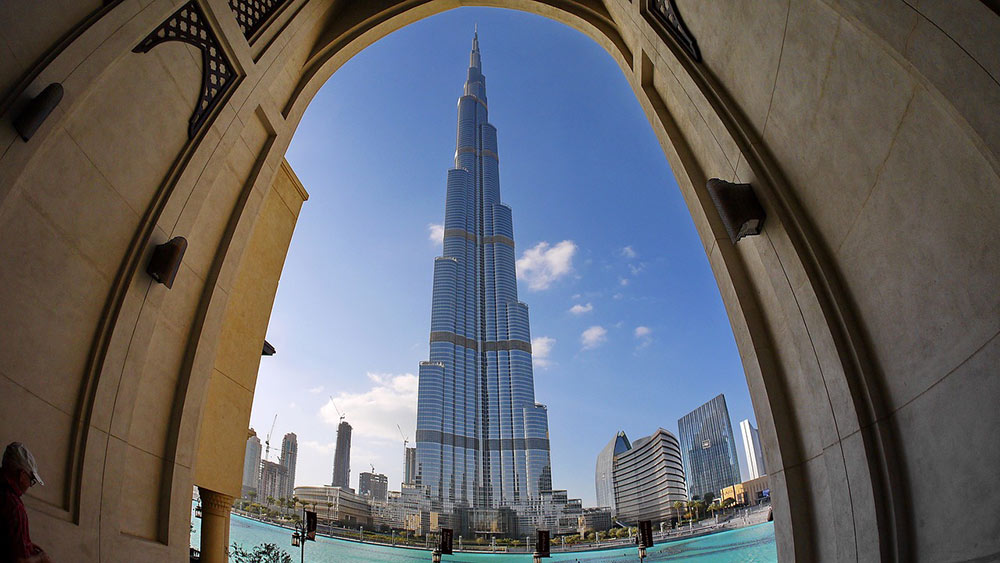 The Burj Khalifa, which can be seen from 95 km away and is 163 stories high, is the tallest building in the world.

It also has one of the fastest elevators in the world which you can take up to the observation deck to enjoy an incredible view of Dubai.

5. 25% of All Cranes in the World Were Once Located in Dubai

During the height of the property boom, Dubai’s skyline was filled with cranes.

Some say the city was home to almost 25 percent of the world’s cranes! But, this might be a bit of an urban legend as other sources only state 2 or 3%.

Nevertheless, the number of cranes in Dubai was and still is, crazy, and the city keeps developing.

It is estimated that around 15 percent of Dubai’s population are Emiratis, while the other 85 percent are expatriates.

Most of the workers building Dubai’s hundreds of skyscrapers immigrated to the United Arab Emirates from India, Pakistan, and Bangladesh. As a result, they now comprise over 50% of the city’s population.

The class divide is big, with many of the immigrant workers living and working in horrible conditions while Emiratis have their rent, education and medical bills paid for and upper-class foreigners earn extremely attractive salaries.

Camel racing is a very popular sport in Dubai, similar to what football is to the USA and hockey to Canada.

Given the camel’s size, only children can participate in racing them. Instead of allowing Dubai residents’ children to participate, there has been a problem in the past with having children illegally trafficked into the country to race camels. The rest of the world eventually caught on to the issue and has since put a stop to it for the most part.

Leave it to Dubai to come up with a solution. Now, child-sized robots are being built and are racing the camels. They cost anywhere from $300 to $10,000.

8. Until Recently Dubai Had No Addresses, No Zip Codes, No Area Codes, and No Postal System

Due to the rate at which Dubai has been growing, it never developed a standard address system.

Instead of an address line on a mailing label, there was a space where residents could draw a map or write out specific instructions such as: “After you pass the white mosque, it’s the first street to the left, blue door.”

It wasn’t until 2015 that Dubai started assigning so-called Makani numbers (a unique 10 digit code) to all buildings to help identify them.

9. You Pay No Income Tax in Dubai

Apart from an often very attractive salary you also won’t have to pay any income taxes when you make your money in Dubai.

This attracts a lot of people who come to Dubai with the idea of saving a good amount of money in a short amount of time.

Do you want to buy some gold? There are ATMs in Dubai that dispense gold bars! Or visit Dubai’s popular Gold Souk, a traditional market with over 380 retailers.

More than 25% of the world’s physical gold passed through Dubai.

But the funniest Dubai fact when it comes to their love of gold is that they hold a world record for making the longest gold chain. The chain measures 5,522 meters (18,116 ft 9.14 in)!

11. Dubai Is Building ‘the World’s Largest Retail and Entertainment Destination’

Things in Dubai always seem to have to be the biggest, the tallest or the most unique, so this latest development fits in perfectly.

Dubai Square, as it will be called, will be equivalent to the size of 100 football fields!

It is inspired by the world’s best shopping destinations such as London‘s Oxford Street and Los Angeles‘s Beverly Hills, but is said to become much more than just a shopping mall.

After reading all these other facts about Dubai I am sure you can expect this to have some unique, over the top features and be very entertaining!

Is Dubai a City or a Country?

Dubai is a city and not a country.

But, and this is where the confusion comes from, Dubai is also the name of the Emirate that the city of Dubai is the capital of.

Generally, when you read about Dubai people are referring to the city.

The UAE is a country with Abu Dhabi being the capital but Dubai the largest city.

Is Dubai a State?

Yes, the emirate of Dubai is one of the 7 states that make up the UAE. So if you are referring to the emirate and not just the city then Dubai is a state.

I hope this clarifies things and I hope you enjoyed all these facts about Dubai!

Dubai is Larger Than Life

Dubai’s goal seems to be to constantly have the biggest and best of everything. Its hotels try to be the most luxurious on earth, including what’s said to be the best hotel in the world: The Burj Al-Arab.

If you ever get the chance to visit this truly unique city, go! Whether you end up liking it or not, it will leave a unique impression.

For More Information & Facts About Dubai:

Also read: In Pictures: Where to Travel to Next – The Perfect Travel Inspiration

Like this article with crazy facts about Dubai? Pin it! 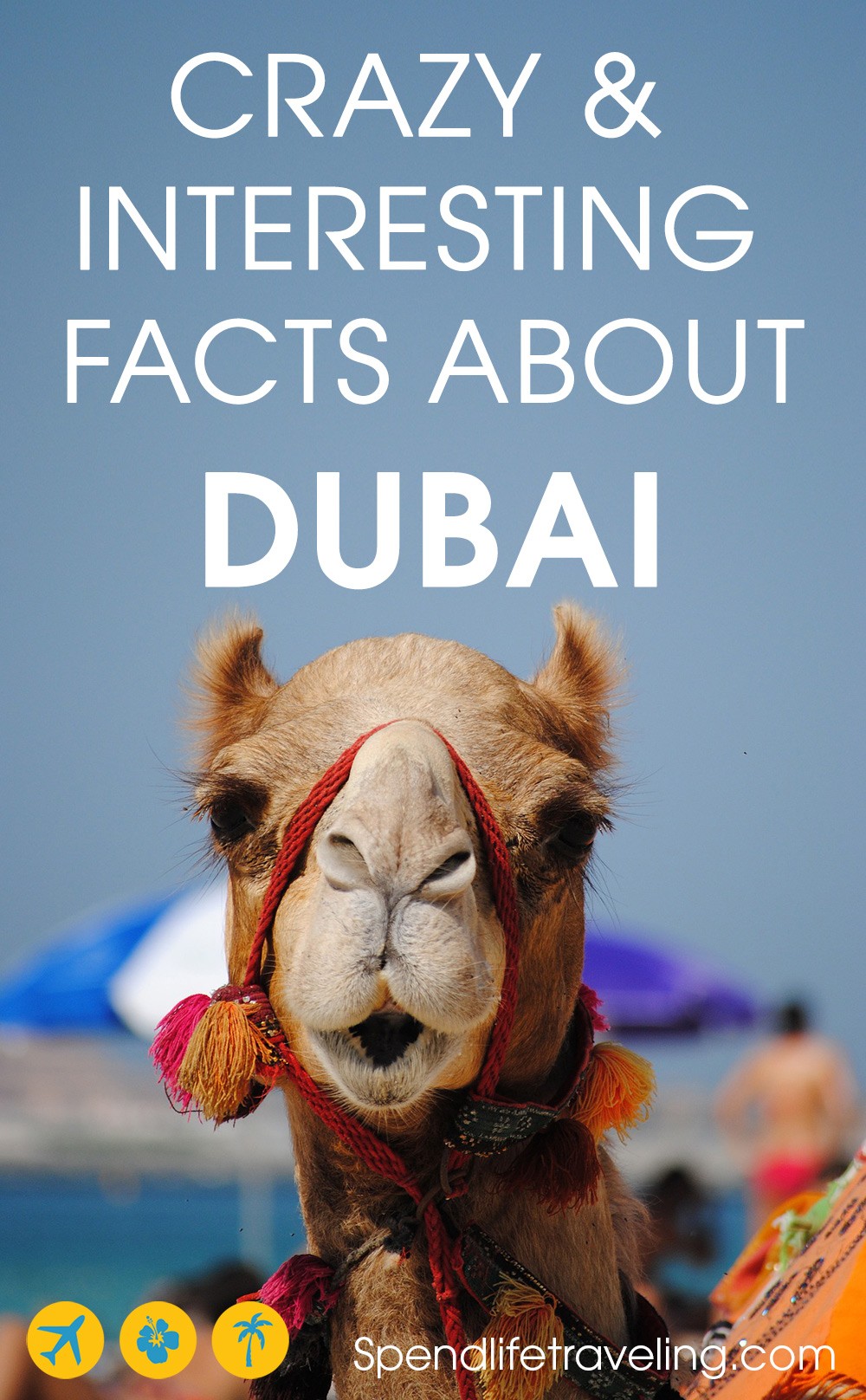