If you fly as often as I do it pays off to know how to find the cheapest flights.

So, I want to share with you my 10 tips on how to get cheap flights, no matter where in the world you want to fly to.

How to Find the Cheapest Flights

1. Know Where to Search for Cheap Flights

Many of the budget airlines you won’t find on large comparison sites for flights such as Kayak, Expedia, or Orbitz. Do check them for comparison though but I almost always end up choosing my flights through Skyscanner.com

Skyscanner offers the broadest range of airlines and some nice tools for finding the best deals if you are flexible (either with your location or dates).

And check out Google Flights

If you want to find the cheapest flights and don’t mind connecting flights and sometimes longer layovers, check out Kiwi.com

: they are great at combining flights from low-cost airlines to get you to wherever you want to go for a lot less.

Kiwi has saved me a lot of money on several flights but also made me spend a lot of time at airports waiting for my cheap connecting flight.

And, when you can, ask locals for their tips on how to get cheap flights as well!

Especially on less popularly booked routes and/or in remote regions, there might be other ways to get cheaper flights (offline offers through local travel agencies for example) or there might be small local airlines that are not listed in online search engines for flights such as Skyscanner but can be found somewhere else.

If you don’t have any contacts in the country (yet) try a platform such as Couchsurfing.com or Trippy.com to ask locals or people with more knowledge of your destination for advice.

When you find small airlines, even if they are listed in a booking tool, it often pays to check the airline’s website which may reveal exclusive online offers not found even in the cheapest search engine for flights. It pays to double-check!

Also Read: Flight Delayed? This is How to Get Compensation Under EU Law

2. Be Flexible with Your Travel Dates

Airline ticket prices vary depending on the day of the week, time of year and upcoming holidays such as Christmas and New Year’s Eve.

It is often cheaper to fly in the middle of the week than on a weekend because most people travel on weekends and airlines raise their prices then. Prices are also often cheaper if you fly right after a major holiday.

Early-morning or late-night flights are cheaper most of the time because fewer people want to travel then.

Before you commit to your departure, make sure you check other dates to find the cheapest day. Even the difference of one day can mean a huge saving!

While many theories exist around booking specifically on a Tuesday to save money, the reality is there is no consistent truth to exactly which days are cheapest to fly. Your best strategy is to get a quick visual of prices for a whole month to see what days are cheapest for your specific route.

Skyscanner has the option to select an entire month so that you can see prices for different days. Or, if you are really flexible, you can even just click on “Cheapest month” to get their best deals:

3. Be Flexible with Your Destinations / Airports

Often there will be more than one airport close to your destination. Don’t only check flights to the nearest airport. If you want to find the cheapest flights and don’t mind traveling a bit longer you can often find a better deal by flying to a nearby airport and taking a bus or train (or even renting a car) from there to your destination.

Most major cities have a smaller, secondary airport. This is the airport most budget airlines fly into because it helps keep costs down since smaller airports charge smaller landing fees.

Check out which airlines fly into these smaller airports. For example, you can take JetBlue to Long Beach, an airport close to Los Angeles, instead of flying into LAX, and save some money. Or in Europe, the low cost airline Ryanair flies into Eindhoven, the Netherlands, instead of Amsterdam airport.

Be sure to check how far the airports are from where you want to go though. Because sometimes transportation from the airport to the city can actually make a budget airline more expensive. However, in general, these budget airlines are a good deal.

Kayak Explore is a fun tool to check out prices for different destinations / airports. Enter your departure city and select a month or season to fly. Approximate costs then appear for hundreds of destinations around the globe from your departure point, allowing you to see the most cost-effective place you can fly.

Looking for travel inspiration? Check out these bucket list destinations!

4. Check out the Budget Airlines

Budget airlines offer significantly cheaper tickets than their full-service counterparts. They are not always included in major search engines for flights so it pays to check flights on their websites.

Do check their terms & conditions: for example, they often have very strict luggage restrictions and will charge high fees if your luggage doesn’t fit within their restrictions.

These are the better low-cost airlines worldwide:

Wikipedia offers a more extensive list of low cost airlines although some of them are more low cost than others.

Also keep in mind that although they are listed per country on Wikipedia, many airlines connect between many other countries as well. For example, you can use Spanish airline Vueling to fly from Amsterdam, the Netherlands, to Rome, Italy.

For example, sometimes it’s cheaper to fly to London and take a budget airline to Amsterdam than to fly direct to Amsterdam.

There are so many budget carriers around the world that taking advantage of a good deal to another city and then hopping on a budget flight to your destination is sometimes the best way to go.

Sometimes it’s worth it to mix and match. Most airlines now sell one-way flights at reasonable prices, meaning one airline might be cheaper for the outbound flight while the other airline works better for the return.

You could even fly to one airport and depart from another.

If you’re flying somewhere that involves a transfer, say from Canada to Australia which typically involves Canada to Los Angeles, then Los Angeles to Australia, consider that it may be cheaper to book these two legs separately on your own.

Just make sure you leave enough time to make your connecting flight in case the first flight arrives late.

And this way you could even turn your stop into an additional destination by flying out a few days later instead of the same day. That’s a great way to discover a new city you otherwise might have never visited!

8. Book Early, But Not Too Early

Ticket prices often go up the closer you get to the date of flying. Therefore don’t wait until the last second but neither book very far in advance.

The best booking window I have been told is six to eight weeks before your flight, or around three months before if you are going to your destination during peak season.

Yes it really happens: search for a flight a few times in a row and all of a sudden the price has gone up.

Based on the cookies in your web browser, flight prices do increase when a particular route is repeatedly searched, as the site wants to scare you into booking the flight quickly before prices get even higher. Always search for flights in incognito or private browsing mode to see the lowest prices.

Your cookies are reset each time you re-open an incognito window. So if you want to start with a clean slate for each flight search (so your previous searches aren’t “remembered”, potentially inflating the price of flights), close all your incognito windows, open a new one, and then perform your flight search.

I know, all those newsletters can get annoying but by signing up for mailing lists from airlines and travel search engines you’ll be able to get updates about all the last-minute or special deals that are happening.

Many times the cheap flights are only available for 24 or 48 hours so without these newsletters you will miss out on many of the super-cheap deals that occur.

If I didn’t receive the Qatar Airways newsletter I would have missed out on a huge discount on my flight from Doha to Paris.

If you use the same airline(s) a lot it pays to join their frequent-flyer program or use a credit card that’s tied to the airline. Personally though because I always go for the cheapest flights I end up using different airlines all the time. But still, signing up is free so why not see how many points you can accumulate and what benefits you can get out of your memberships!

And of course, if you want the cheapest flight, be prepared to get up very early, fly late at night or spend a good few hours (or an entire night) at an airport waiting for a connecting flight…

Like this article about how to find the cheapest flights? Pin it! 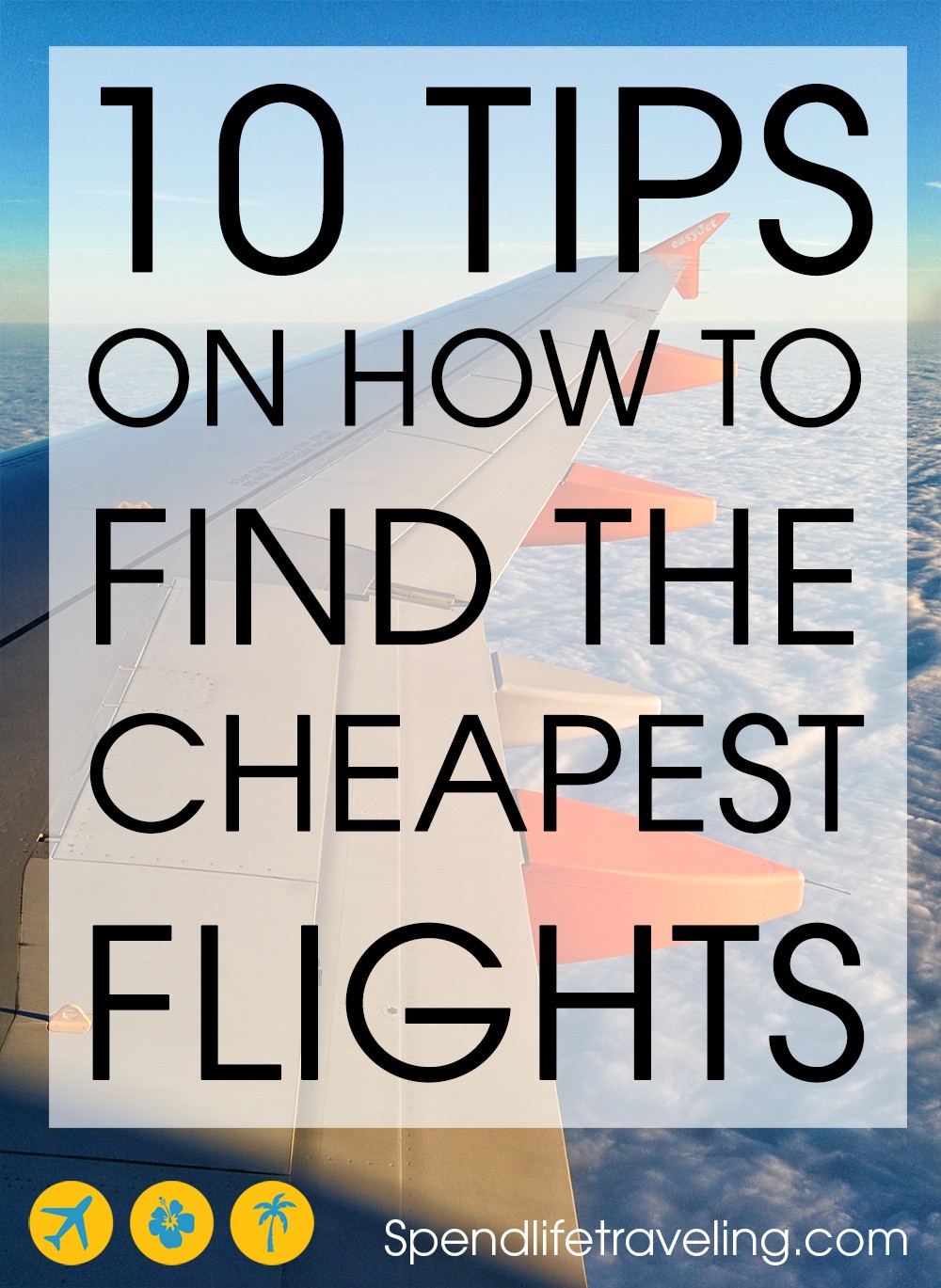 Featured image: my cheap flight from the Caribbean island of Bonaire to Aruba

This post about how to find cheap flights contains affiliate links. I may receive a commission for purchases made through these links, at no additional cost to you.