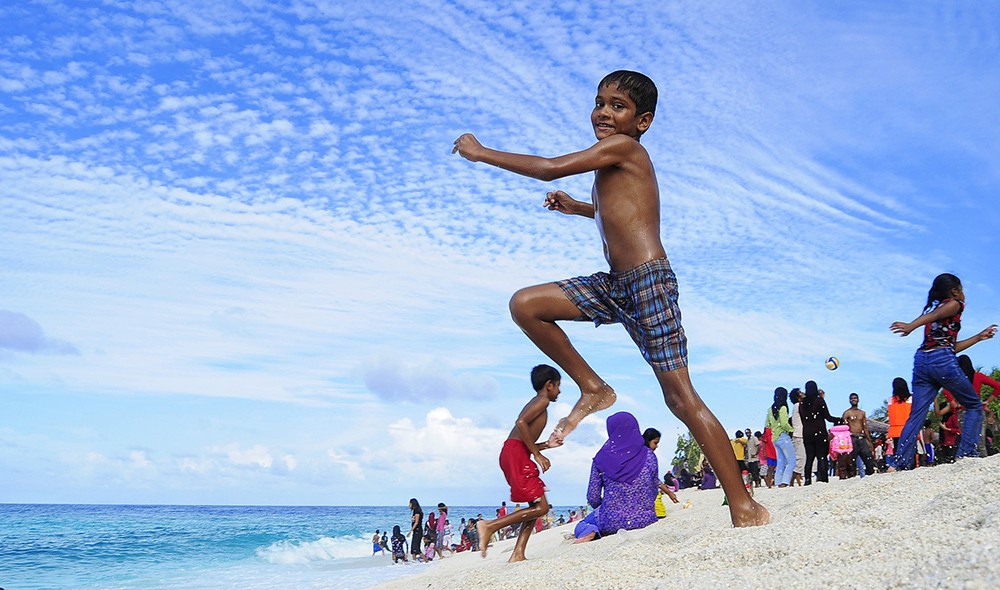 A few days ago a Facebook friend shared an interesting article: 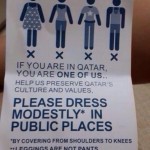 “Leggings are NOT pants: Qatar puts its foot down with dress code as it launches advertising campaign reminding female tourists what not to wear”
Read full article here >>

Qatar is a strict Islamic country and the fact that it, with many Qatari women covered head-to-toe, now asks for some modesty from its foreign visitors comes as no surprise to me.

But, I have lived in a strict Islamic country myself. I spent most of 2012 and the beginning of 2013 in the Maldives.

Living in the Maldives as a Non-Muslim Expat

“The Maldives? A strict Islamic country?” you may well wonder but yes, it is. They use Sharia law (also referred to as Islamic law) and the constitution demands every citizen to be a Muslim.

In the Maldives foreigners are not forced by law (yet) to cover themselves. The only thing you aren’t allowed to wear on inhabited islands in the Maldives, which is very clearly indicated on some of the beaches, is a bathing suit.

This alone I found annoying enough though; swimming with your clothes on, not being allowed to change into something dry afterwards… But, you are a guest in their country so you follow their rules.

Resort islands count as uninhabited islands by the way (even though a large part of the staff actually lives there permanently) and therefore none of the Maldivian rules apply… strangely enough.

Women in capital city Malé always dress modestly but not all wear a headscarf and only a few would wear a niqab. I normally made sure I’d wear something that covered my knees and shoulders and show no cleavage.

Since I’m not one for wearing mini-skirts anyway it wasn’t hard to find appropriate outfits. But, being a stubborn Westerner and with temperatures of normally over 30 degrees Celsius (86 Fahrenheit), I would sometimes just feel like wearing shorts or a slightly more airy shirt. And since I didn’t have to cover my knees and shoulders by law… why wouldn’t I wear what I felt like? Because it makes life harder. I soon found that out.

As a pale, blond foreigner I was stared at no matter what I wore and had to deal with occasional comments ranging from an overly friendly ‘hello beautiful’ to a not so friendly ‘hey sexy bitch’.

But when I decided to wear shorts (simple, sporty, definitely not too short shorts) it seemed to get worse. Everywhere I had to walk felt twice as far away. The constant staring, comments, men looking at me as if I was the scum of the earth… I know I should be able to ignore it (I have traveled enough, try men in Latin America, they can be annoying and a lot more aggressive at it!). But I couldn’t ignore it. And so I’d cover up again.

Choosing your wardrobe is not the only issue when living in the Maldives though. Away from the resorts, the sale and consumption of alcohol is forbidden, as are pork products so forget about that bacon sandwich idea.

While I was living here it became illegal to dance with someone of the opposite sex and if you are thinking of bringing your pooch, forget it… dogs are also illegal!

The Maldives are some of the most amazingly beautiful islands on Earth. Living in the Maldives, however, will quickly show you it’s not quite life in paradise… Combine that with the aftermaths of a coup when I was there and you have a truly interesting travel experience!

Also Read: What Living in the Maldives is Really Like

The aforementioned article about Qatar also shows a leaflet issued as part of their campaign stating:

“Whoever makes any gesture, recites songs, utters indecent phrases, or does any obscene act by any means in or near any public place shall be punished with imprisonment for a period not exceeding six months, and with a fine not exceeding three thousand Riyals or with any of these penalties.”

So does that mean kissing your boyfriend will get you sent to jail? I guess it might…

Thankfully nothing like that happened when I was living in the Maldives. That is, to us expats that didn’t happen.

I do remember that while I was there the court sentenced a 17-year-old boy to four months in prison after he kissed his 16-year-old girlfriend in a court waiting room… Is that insane? Should we judge? Can we judge? Or should we just respect the law and the court of the country we are in even if we don’t agree with it? I don’t know…

But I do know one thing: we are free to choose the countries we travel to and the countries we decide to work in as an expat. And maybe a country where something as innocent as kissing your partner could send you to jail is one of those countries that won’t offer an ideal lifestyle.

I’m thankful that I get to choose and walk away from countries whose systems I don’t believe in… Too bad it’s a completely different story for most of its citizens.