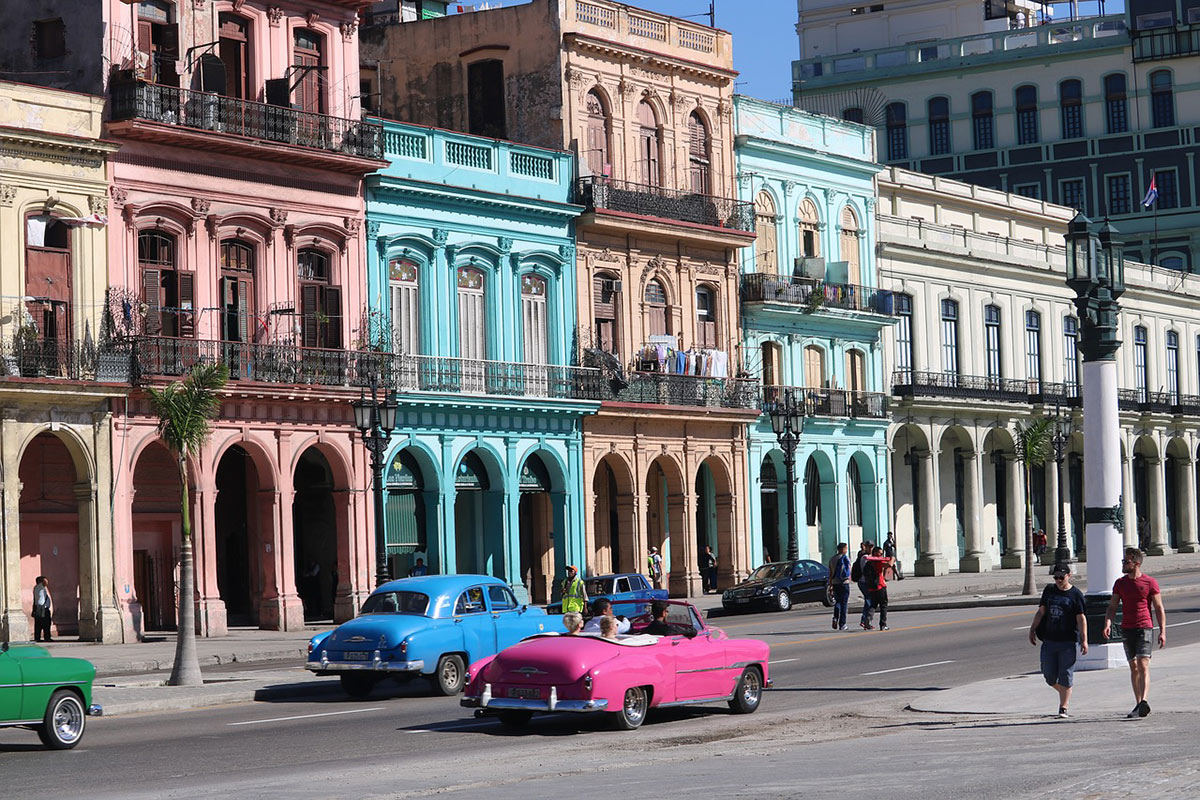 In this article, I interview Ayngelina about what it’s like to move to and live in Havana, Cuba.

She shares both personal experiences and a lot of practical tips for anyone who is thinking about living in Havana or is just curious about life in Cuba in general. 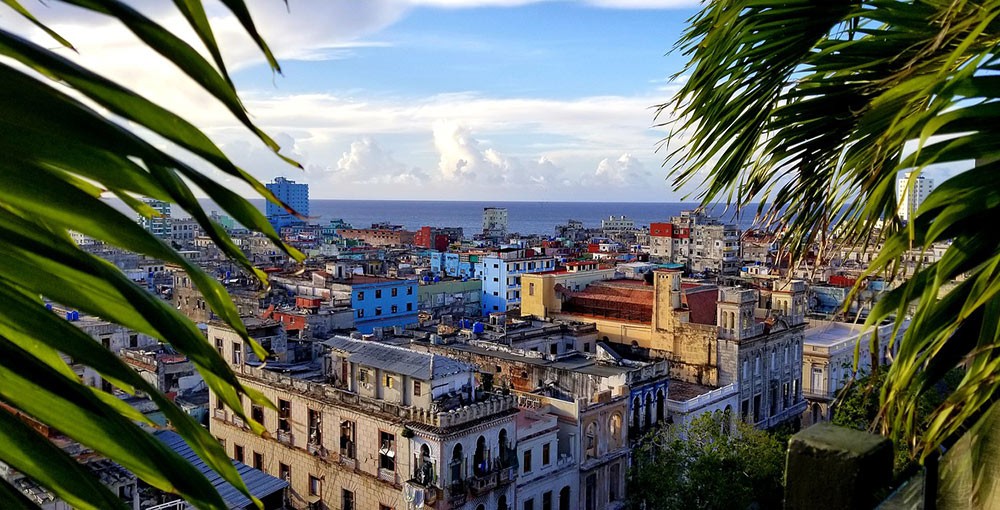 “Ten years ago I left my job in advertising, sold all my possessions and ended a relationship to travel.

I bought a one-way ticket to Mexico and planned to travel the world.

But after two years I still wasn’t out of Latin America. It captured my heart and since then I’ve spent a lot of time in different countries in the Americas.”

Why Did You Move to Havana?

“This surprised me more than anyone else. Nearly three years ago I was in a small town in Mexico and I took a day trip with friends where one mentioned you could see the lights of Havana at night.

I had no idea Cuba was so close, and it was one of the few countries in Latin America I still hadn’t visited. Mostly because it seemed so mysterious and I didn’t know what it would be like to travel there alone. So, I convinced them later that day to buy a flight for a 4 day trip to Havana.

Honestly, the first three days were horrible. We ended up in tourist traps, ate terrible food and I just didn’t feel connected to the city. We had basically given up.

Then one of my friends ended up in a conversation with a local, and told him that I wrote about food around the world but we hadn’t had anything good.

He said he’d change that so he invited us for lunch at a local spot in Centro Habana where the five of us ate and drank all afternoon and the bill was $17. The food was amazing and I was stunned. Clearly the problem was that we just weren’t going to local places.

So I asked my new friends if they would help me find more spots like this if I returned and spent a month in Havana. It took me 2 years to write a guide to the best Havana restaurants. In it I recommend 35 different spots in different neighborhoods and price levels. It also includes Caridad, which is the spot they invited me to that day.”

“The Cuban culture is so strong. It straddles the Caribbean and Latin America and Cubans just live life differently. They approach problems differently and are able to live in the moment.

Havana is a world-class city and I’m sad that most people only go to touristy Hemingway bars or take classic car rides. They only see a very shallow part of the city so I’m working on so many other articles beyond food that help people access a more authentic view of Havana.”

What Do You Dislike About Living in Havana?

“No es fácil is basically Cuba’s slogan. ‘It’s not easy’.

Life in Havana is expensive for foreigners, and especially for me as I need to be central to write about things accessible for tourists. I’d say it’s twice as expensive as Mexico. There are two different Cuban currencies and one is pegged 1-1 with the USD, which makes some items more expensive than in Canada.

There are constant shortages of food, water, gas, etc. Cubans have a ration system where they receive monthly rations in a booklet of basic necessities but it doesn’t cover everything. Food could be in a number of different types of stores and you usually have to look in several to find what you need.

Weekly grocery shopping can take a day, just to get what you need, and I’ve never been able to get everything I wanted.

Cubans also don’t eat a lot of vegetables so the produce shops are small and not very diverse. It can be tiring to eat the same 6 vegetables every day. But I’ve learned to adapt and embrace canned veggies when necessary.”

Is Havana Safe as a Place to Live?

“Absolutely. Cuba is considered one of the safest countries in Latin America.

As a woman I have experienced catcalling but no one has ever gotten in my personal space. As I am used to traveling in Latin America I don’t even hear the catcalling anymore.

There is petty theft, pickpocketing, shortchanging, etc. You need to keep your apartment locked and shouldn’t be out after midnight on your own. But I feel safer living in Havana than in other major cities.”

What Is Your Favorite Thing to Do in Havana?

“I love the beach. While Havana is on the water there is no beach in the city. But there are the Havana beaches called Playas del Este and they are incredible, with the same turquoise waters and white soft sands.

Varadero gets the credit for being one of the best beaches in the world. But it’s mostly filled with tourists. You’ll find locals at the Havana beaches, especially in the summer and it’s always a fun time.”

Also Read: Why You Shouldn’t Take Seashells From the Beach or Buy Them as Souvenirs

What Is Your Favorite Place to Hang Out in Havana?

“This is boring to say but I like going to my friends’ homes. It is very common for people to just drop in and not call ahead of time – completely different than in Canada. There is a really great sense of hospitality in Cuban culture.

You are always offered coffee, something to eat if possible and if you’re lucky everyone pitches in to split some rum.

I also love the energy of the Malecon/sea wall at night. Everyone meets after dusk and then it’s kilometers of friends, lovers, and families listening to music, sharing a drink, and catching up on the day.

Cubans really live in the street and so while there are some great restaurants and bars, the energy is outside.”

What Is the Expat / International Community Like in Havana?

I would say it’s non-existent. Not to say that there aren’t any expats living in Havana, but it’s a very small number.

It’s nearly impossible for Cubans to own property or a business. And you can apply for permanent residency if you are married to a Cuban but you can never have full citizenship – you have to be born in Cuba to be Cuban.

There are some foreign journalists here, people involved in tourism, and others who live in Havana because they are married to a Cuban.

I know of several through Facebook groups but I think some people move to Cuba thinking it will be a cheap and easy life only to find out that is far from the truth.”

Any Tips for Moving to / Living in Havana?

“I would try to rent an apartment in Havana for as long as you can before making any decisions to live there.

It’s easy to get caught up in the fun, tourist side or mojitos, bars, music, and beaches. But day-to-day living in Havana is very different.

I love it but I’m also fortunate enough that I have to travel for work so usually every 4-6 weeks I have to leave for work, which is about the time it starts to wear on me.

I often say in a week I’ll have an absolute breakdown and cry from frustration and in the same week I think it’s the best place in the world.

Havana is the best and the worst. You have to be the kind of person who can deal with both.”

Any Resources You Found Useful During the Process of Moving to And/Or Building a New Life in Havana?

“Connor Gorrey is an American journalist who has been living in Cuba since the 90s, including the Special Period. She runs a bookshop/cafe called Cuba Libro and a blog called Here is Havana where she shares moments of her life in Cuba.

I like that she doesn’t romanticize life in Cuba but clearly loves it. She is very matter of fact about issues and the longer I stay in Havana the more I can understand this.”

Is There Something You Just Have to See or Do When You Are in Havana?

“Take a day tour with a local. Airbnb has great options and entrepreneurial Cubans are taking advantage of this.

Most independent travelers think they don’t need tours. But even if you speak Spanish you will miss the nuances of Havana, which is what makes it so special.”

About Cuba and Havana 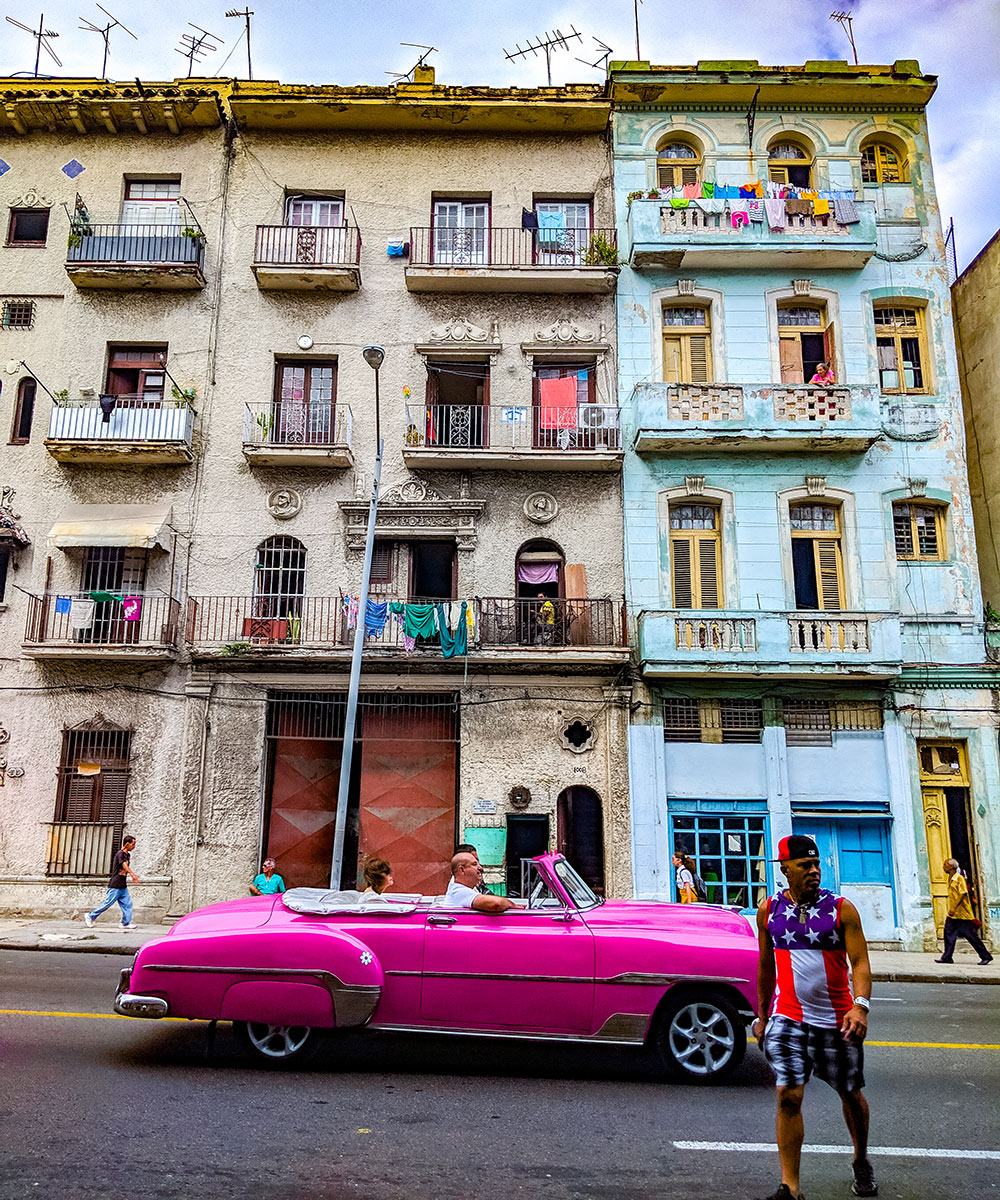 Cuba is the largest Caribbean island, located between the Caribbean Sea and the North Atlantic Ocean.

From the 15th century, it was a colony of Spain until the Spanish–American War of 1898, when Cuba was occupied by the United States and gained nominal independence as a de facto United States protectorate in 1902.

As a fragile republic, in 1940 Cuba attempted to strengthen its democratic system, but mounting political radicalization and social strife lead to a coup and subsequent dictatorship under Fulgencio Batista in 1952.

Open corruption and oppression under Batista’s rule led to his ousting in January 1959, which afterward established communist rule under the leadership of Fidel Castro.

Since 1965, the country has been governed by the Communist Party of Cuba.

Cuba was a point of contention during the Cold War between the Soviet Union and the United States, and a nuclear war nearly broke out during the Cuban Missile Crisis of 1962.

Soviet military assistance enabled Cuba to project power abroad. It was involved in a broad range of military and humanitarian activities in many African and some Asian countries. Cuban intervention in Angola contributed to the downfall of the apartheid regime in South Africa. The presence of a substantial number of blacks and mulattos in the Cuban forces (40–50 percent in Angola) helped give teeth to Castro’s campaign against racism and related prejudice like xenophobia.

Culturally, Cuba is considered part of Latin America. It is a multiethnic country whose people, culture and customs derive from diverse origins. This includes the aboriginal Taíno and Ciboney peoples, the long period of Spanish colonialism, the introduction of African slaves, and a close relationship with the Soviet Union in the Cold War.

Cuba has one of the world’s only planned economies. Its economy is dominated by the tourism industry and the exports of skilled labor, sugar, tobacco, and coffee.

These days many European, Canadian, and even American visitors come to the island. In the typical tourist regions like Varadero and Holguín many modern 3-star to 5-star hotels are available, while in less popular tourist regions visitors are still able to rent rooms in many Cuban homes (called casas particulares).

The city of Havana was founded by the Spanish in the 16th century.

Contemporary Havana can essentially be described as three cities in one: Old Havana, Vedado and the newer suburban districts.

The city is noted for its history, culture, architecture and monuments, and Old Havana was declared a UNESCO World Heritage Site in 1982.

Before the Communist revolution and subsequent US blockade, Havana was one of the vacation hot-spots of the Caribbean, and since Cuba reopened to tourism in the 1990s, it has become a popular destination once again, albeit with many fewer U.S. citizens.

Like this article about life in Havana, Cuba? Pin it! 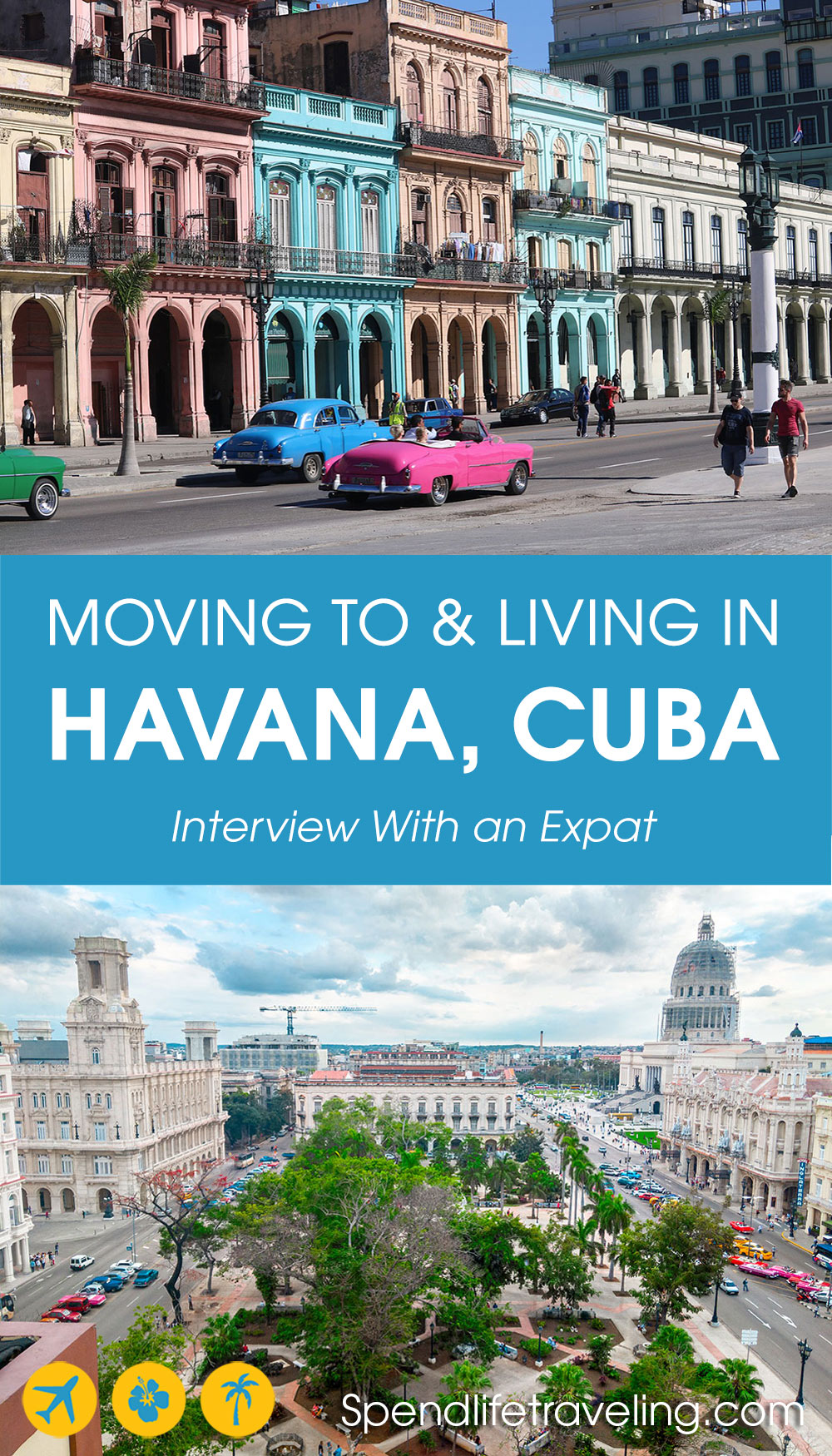 2 thoughts on “Living in Havana, Cuba – Interview With an Expat”