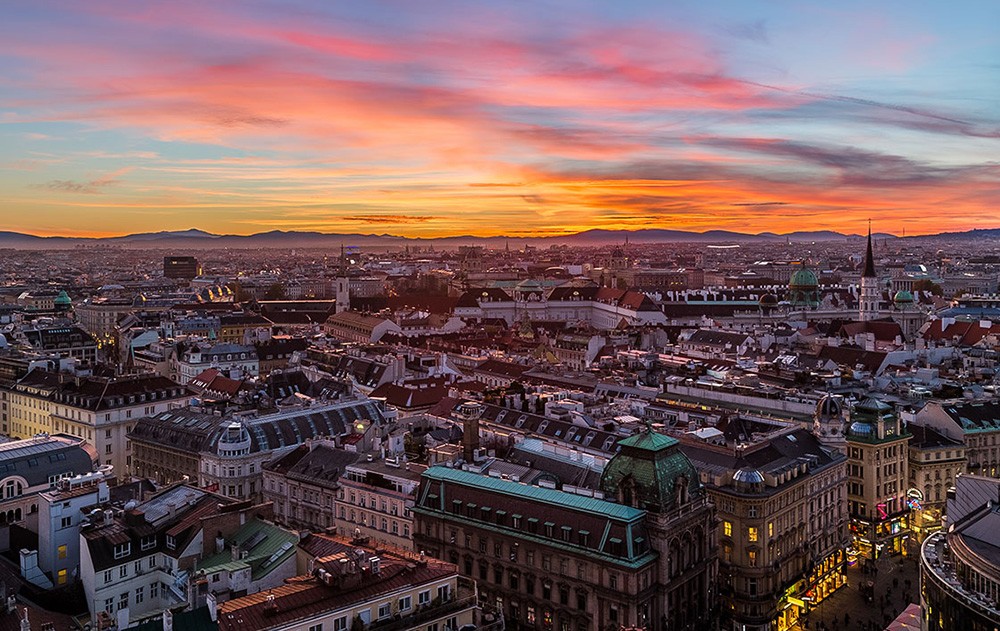 What is it like to move to and live in Vienna?

In this Ask an Expat series I interview people living all over the world, but outside of their home country. I try to help paint an honest picture of the ups and downs of life abroad, share tips for other (future) expats and share information about what to see and do in the city, town or country the expat now calls home.

This is an interview with Mike about moving to and living in Vienna.

Mike Clegg has been one of my favorite photographers on Instagram for quite a while now. So when he approached me to be interviewed about his life in Vienna as an expat, I felt honored.

It was great to get to know more about the guy behind the camera and his interesting life abroad, and I am happy I can share that interview about life in Vienna with you here.

“A couple of years ago I lived and work full time in London. I then met my girlfriend who is from Canada while she was in London on a two-year visa.

Once her visa expired we decided to both move to Canada. I had a one-year working visa for this.

During my time in Canada, I worked part-time for a company similar to what I was doing in England. Unfortunately, the job didn’t really work out so I left and then did freelance photography, working on various projects and with different clients.

Then, similar to my girlfriend’s visa problem in London, my visa ended and couldn’t easily be renewed. And that is how, eventually, we decided to give life in Vienna a try.”

Why Did You Move to Vienna?

“My girlfriend is a teacher and got a job at an international school here.

Me being European made it easy for me to also live in Vienna, so it seemed like a sensible choice.”

There’s also lots to do in the city throughout the year. For example ice skating in the winter, film festivals, hiking trails, lots of outdoor swimming pools, festivals and various other events.

Of course there are the well-known things too like amazing palaces, gardens, churches and other tourist attractions.

And as well as plenty of things to do in the city, it’s also easy to get the train or bus to neighboring cities and countries.

I’ve been to Prague about four times because it’s only a 4-5 hour bus ride and it’s also cheap. And that’s just one example of a big range of places which are easily accessible.”

What Do You Dislike About Living in Vienna?

“One of the main things I dislike about life in Vienna is that you can’t always use your bank cards. In restaurants for example, and it’s caught me out a few times, meaning I’ve had to go and get cash out after eating my dinner.

Moving to Vienna was also quite difficult in the sense of getting an apartment, phone, and bank card.

If you are thinking of moving to Vienna the first thing you need to do is get your address registered with a Meldezettel office. Once you have that done, things generally fall into place.

In terms of apartment hunting, it really wasn’t easy and can be quite expensive. We expected to find a place within two weeks, but it took over a month and we looked at a lot of places. You often get unfurnished apartments and have to pay quite a few fees upfront.”

Also Read: What to Consider Before Moving Abroad

What Is Your Favorite Thing to Do in Vienna?

Many of the palaces and landmarks can be found around this area and it’s really beautiful. At Christmas even more so when there are Christmas Markets everywhere combined with beautiful decorations along many of the streets.”

What Is Your Favorite Place to Hang out in Vienna?

“Actually, some of the nicest places in Vienna are coffee shops.

One in particular I’m a big fan of is Cafe Central which I’ve been to many times now. It has true Viennese style and is a wonderful place for anyone visiting Vienna.”

What Is the Expat / International Community like in Vienna?

“Most expats in Vienna I know are from the school that I was working for, which had people from all around the world. I found everyone there extremely friendly and most people are well-traveled and have similar interests in respect to a love of travel.

There are groups on Facebook such as Vienna Expats and this awesome group on Meetup.com; Internationals in Wien, which are a great way of meeting expats in Vienna and a good opportunity to join fun events.”

Any Tips for Moving to / Living in Vienna?

“Unless you find a place to live before you move, I think it’s worth staying in an Airbnb for about a month, whilst you find somewhere and sort out the paperwork. It definitely takes longer than you think.

And another tip: when looking for a phone you can often get a sim-only deal that’s a lot cheaper than a contract. It may require you manually topping up your phone every month but for me, I get 6GB of data, 1,000 text messages and 1,000 minutes for €20 with A1, whilst a contract with A1 is a lot more and has a large activation fee.”

Any Resources You Found Useful During the Process of Moving to And/Or Building a New Life in Vienna?

We found our apartment on Willhaben.at. We were lucky and managed to get it directly from the leaving tenants, therefore saving money on fees and we also bought some of their furniture.

Although we were definitely lucky, there will be other deals like this. Also on that website you can buy and sell furniture and other products.

For help and advice about Austria, the rules of the country and other tips the Expat Center is very helpful (also called the Vienna Business Agency).

If you’re looking for English and American products head to Bobby’s Foodstore on Schleifmühlgasse 8, 1040.”

Is There Something You Just Have to See or Do When You Are in Vienna?

“One of the things I highly recommend is to go up Stephansdom which has some of the best views of the city.

In the summer swim in the Alte Donau or take a walk around the Vineyards in Kahlenberg.

And definitely go to a heuriger (an Austrian establishment where wine from the latest harvest is served) for dinner. That is a true Viennese experience!”

About Mike – Expat in Vienna

Mike is a travel photographer and blogger originally from London, but in recent years he has lived in Toronto and now he is enjoying expat life in Vienna.

He spends most of his time traveling, taking photographs and sharing his pictures and experiences with online communities.

Visit his website Travelanddestinations.com for more information and check out his article about why Vienna is such a great place to live.

Vienna is the capital of Austria. It lies in the country’s east on the Danube River and is Austria’s cultural, economic, and political center.

The city’s artistic and intellectual legacy was shaped by residents including Mozart, Beethoven, and Sigmund Freud.

As the former home of the Habsburg court and its various empires, the city, with famous imperial palaces, still has the trappings of the imperial capital it once was.

Tip: if you are looking to explore Vienna, try the Big Bus sightseeing tour

Like this article about expat life in Vienna? Pin it!

Most pictures used in this article are taken by Mike Clegg

This blog about expat life in Vienna contains affiliate links. When you make a purchase using these links we receive a small fee so that we can buy ourselves a cup of coffee (or a glass of wine). Thanks!

22 thoughts on “Living in Vienna, Austria – Interview With an Expat”