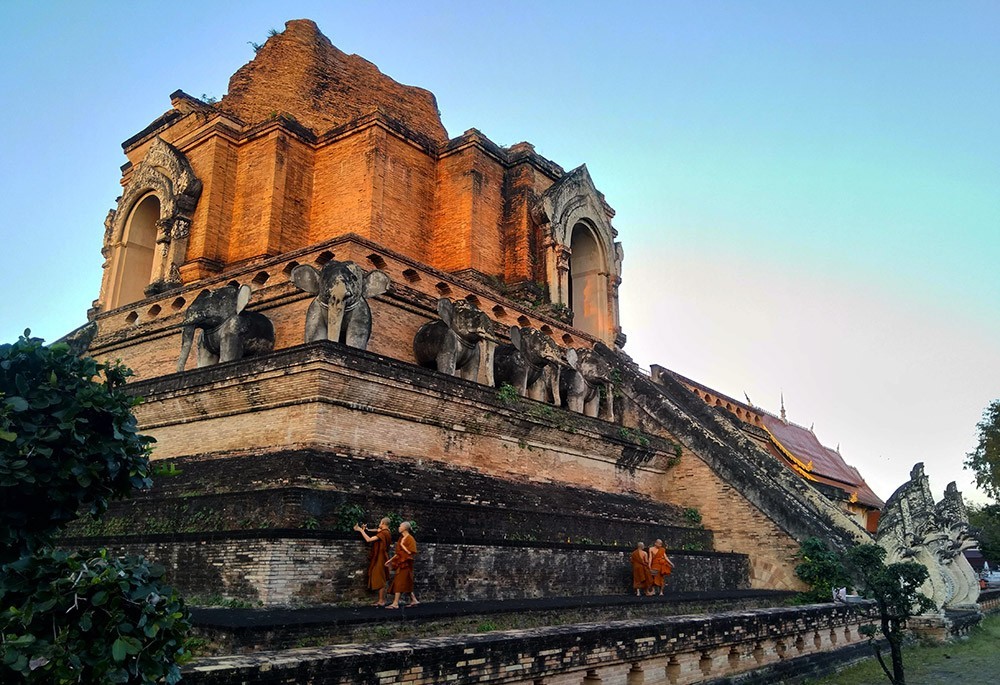 What is it like to move to and live in Chiang Mai?

I just spent a few weeks traveling in Thailand and one of my favorite places was Chiang Mai.

Chiang Mai is a popular city for both digital nomads and expats from all over the world. Some spend a few months here, others decide to retire here.

But what is living in Chiang Mai really like? 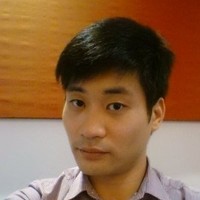 “Well this is a long one. I met my partner 13 years ago in Sydney and he is Thai.

He spent the majority of our relationship in Sydney with me but always talked about going home. He generally didn’t like living in Australia, and on top of that, all his family and friends are in Thailand.

At the time I worked in wholesale travel, I was good at my job and didn’t really see myself moving overseas.

However, in the back of my mind, I knew I had to move to Thailand in the future.

Leading up to the move overseas, roughly 3 years prior, I started to look at options where I could work online/abroad.

I started researching the financial markets and now I run a small hedge fund with investors; mainly  family and friends.”

Why Did You Move to Chiang Mai?

“This was mainly because of my partner. He always wanted to go back home to Thailand.

I don’t think anyone just thinks they want to move overseas, as always there is a reason for someone to relocate.”

What Do You Like About Living in Chiang Mai?

“I visited both Bangkok and Chiang Mai many times before moving to Thailand. We thought about moving to Bangkok, but we always found it very busy, and the pollution and traffic are terrible.

The city has been getting more popular recently though, to the point that they are frantically building more freeways and also another airport.”

What Do You Dislike About Living in Chiang Mai?

Another thing I don’t like about living in Chiang Mai is that around March / April the farmers burn all the old rice crops which covers the city in a very uncomfortable smoke. It’s often referred to as the ‘burning season’ and many expats and digital nomads choose to leave Chiang Mai around this time.

However, the local governments are trying to do something about this so hopefully it will get better.”

What is Your Favorite Thing to Do in Chiang Mai?

“As I am an expat that works for an Australian company, I don’t really have much time to explore, but what I do enjoy is catching up with other expats that work here.

I have a friend that works in Bangkok and comes up to Chiang Mai several times a year to visit me, and also other work friends from Sydney who come to visit.”

What is Your Favorite Place to Hang Out in Chiang Mai?

“I’m not much of a bar/club person anymore.

However, Pern’s Restaurant is a nice place to have a meal to get the western fix, along with talking to some other expats in Chiang Mai.”

What is the Expat / International Community Like in Chiang Mai?

“This is a hard one to answer, since the term expat is often used in such a broad sense. It could include anything from young digital nomads who only move to Chiang Mai for a few months, down to retired couples who decide to make Chiang Mai their permanent home.

I don’t hang out with the digital nomads as they only tend to stay here for a few months before moving on, so its hard to really build up relationships with them.

There are a lot of digital nomads in Chiang Mai though. They tend to use coworking spaces and live in budget accommodation, and work online, often as freelancers, web developers, or in some kind of content creation.

My partner and I have been living in Chiang Mai for a long time and are well established here. I find myself relating more to the older crowd, as the street we live in has mostly retired expats from countries such as the United States, Switzerland, Dubai, and Australia, mixed with retired investors from different parts of Thailand.

From what I gather the digital nomad scene in Chiang Mai is vibrant with regular meetups. However, older expats tend to keep to themselves and I  have found it difficult to meet expats in Chiang Mai that work in my field of expertise.”

Any Tips for Moving to / Living in Chiang Mai?

“Just do it. First perhaps come and visit the city and have a look around.

The most important thing to realize though is that working and living somewhere as an expat will be a completely different experience to visiting a place as a tourist.

Also Read: Living & Working Abroad – What You Thought vs What It’s Really Like

If you do decide to move to Chiang Mai and are looking for accommodation, I recommend renting a bike or motorcycle and just visit all the condos that might interest you, as most of them don’t advertise online.

If you like a particular area or condo, just go to the reception of each condo and ask what they have available. In most cases they will have condos available for rent.

If you are looking for a house in Chiang Mai it’s generally best to use an agent. Perfect Homes Chiang Mai, Doisaket Properties, and FazWaz are the main players here.”

Any Resources You Found Useful During the Process of Moving to and/or Building a New Life in Chiang Mai?

“The Facebook group Chiang Mai Expats is a useful group to join. Any questions you might have about moving to and living in Chiang Mai you can ask there. Plus it’s a good way to meet other expats in Chiang Mai.

But I think the most important thing is to visit Chiang Mai for yourself and see what you think of it before committing to anything.

Because the worst thing that could happen is that you move to Chiang Mai without even having visited, to then realize it just isn’t for you…”

Is There Something You Just Have to See or Do When You Are in Chiang Mai?

“I have visited all the usual tourist hot spots and attractions, but I think the best thing to do in Chiang Mai is to mix with the locals.

There are many things that are “hidden” from the normal tourist, so this is the perfect way to get the insider secrets.

A good example is the annual lantern festival. A lot of tourists pay a lot of money to attend an organized event during this festival, not knowing that every local community/village will light lanterns and set off fireworks and that this has much more of a local feel to it.”

Chiang Mai is the hub of Northern Thailand and the Capital City of Chiang Mai Province.

With a population of over 170,000 in the city proper (but more than 1 million in the metropolitan area), it is Thailand’s fifth-largest city.

Chiang Mai is surrounded by mountains and lush countryside. It is much greener and quieter than Thailand’s capital Bangkok, and has a cosmopolitan air and a sizeable expat population.

All of these are factors which have led many Bangkok residents to move to Chiang Mai.

In early–December 2017, Chiang Mai was awarded the UNESCO title of Creative City.

Like this article about expat life in Chiang Mai? Pin it! 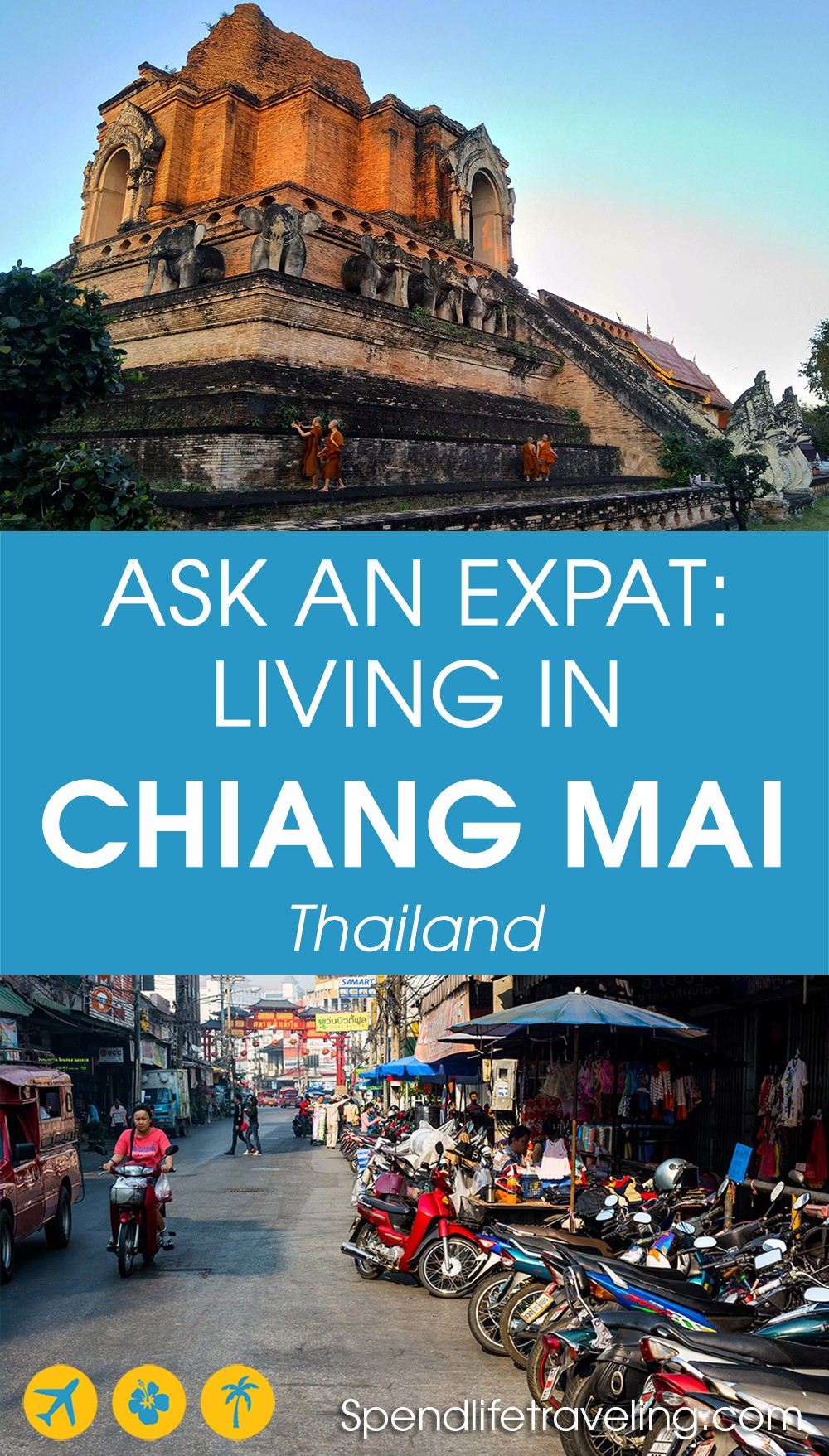