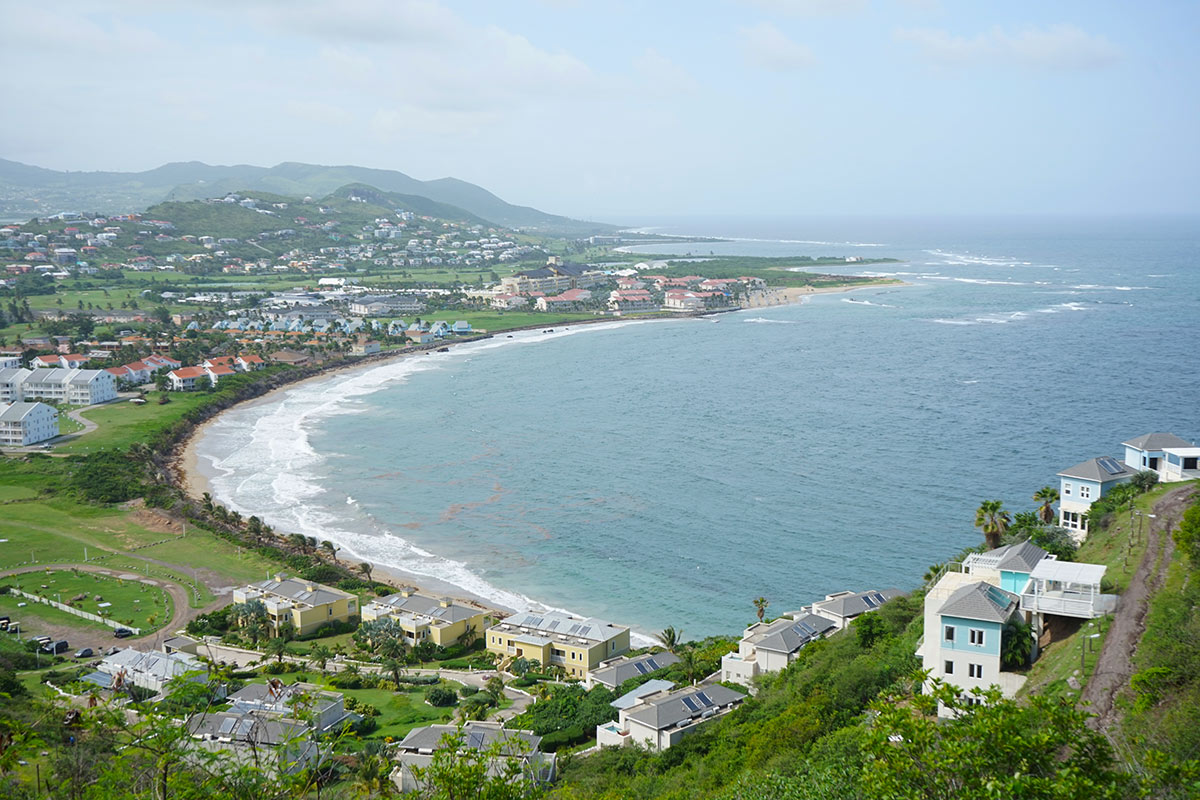 In this article I interview Steph, who is currently living in St. Kitts, about what life on this beautiful Caribbean island is like.

She shares both personal experiences and a lot of practical tips for anyone who is thinking about moving to and living on St. Kitts.

I’ve lived in the Caribbean myself (in St. Maarten and Aruba) and still miss Caribbean life every day. So I am very excited to share this interview!

“As a child I always loved animals and as I went through school, I realized I wanted to work with them.  I started training to be a veterinary nurse in 2006 and qualified in 2009.

After many years working at different veterinary practices around Derby and Nottingham I made lots of friends in the veterinary field. One day while browsing on Facebook a friend I had worked with previously posted about a job at a Veterinary University in St Kitts. I told my husband and he encouraged me to apply and within a few months we were being flown out to the island for an interview and to check it out.”

Why Did You Move to St Kitts?

“Following the interview, I got offered the job opportunity of a lifetime, teaching anesthesia to veterinary students at Ross University in St Kitts.

So, in February 2019 I moved with my husband and two cats to this tiny Caribbean island. We love it here and have no intention of going back to the UK any time soon.”

What Do You Like About Living in St Kitts? 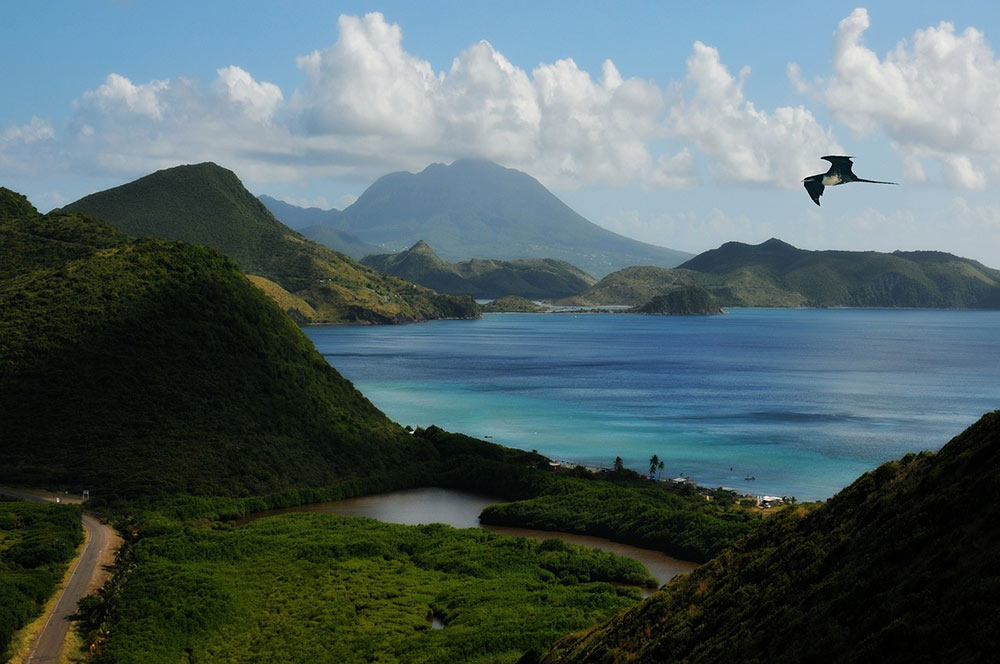 “Is it too obvious to say the weather?

The year-round warm weather has done wonders for my mental health. It’s not all sunshine though because St Kitts does have a hurricane season. Luckily, we haven’t experienced any bad hurricanes yet.

I also love the close proximity to the beaches and being able to swim all year round. Where I lived in England was about as far from the beach as you could get so it makes a nice change to be only a few minutes away from multiple beaches.”

What Do You Dislike About Life in St Kitts?

“That’s a hard one, there’s not much to dislike but if I had to choose something it would probably be ‘island time’.

Island time is a real thing here and it could be anything from waiting over an hour for your bill in a restaurant to not getting mail delivered when it arrives on the island.

It took 3 months from my parents posting my birthday card to me actually getting it, and it was supposed to be guaranteed 7-day international delivery.”

What is the Best Way to Find a Place to Live?

“Definitely through a real estate agent.

There are a couple of really good ones that will look for properties to suit your needs but rent here can be expensive in the expat communities and buying even more so.”

What are Popular Areas to Live?

“Most expats live in Frigate Bay which is an area on the southeast of the island. Frigate Bay has various options from apartment complexes with pools and gyms to large private homes.

There are many affordable properties in other areas around the island where local ‘Kittians’ live but from my experience expats tend to want to stick together.”

Is St Kitts Safe as a Place to Live? 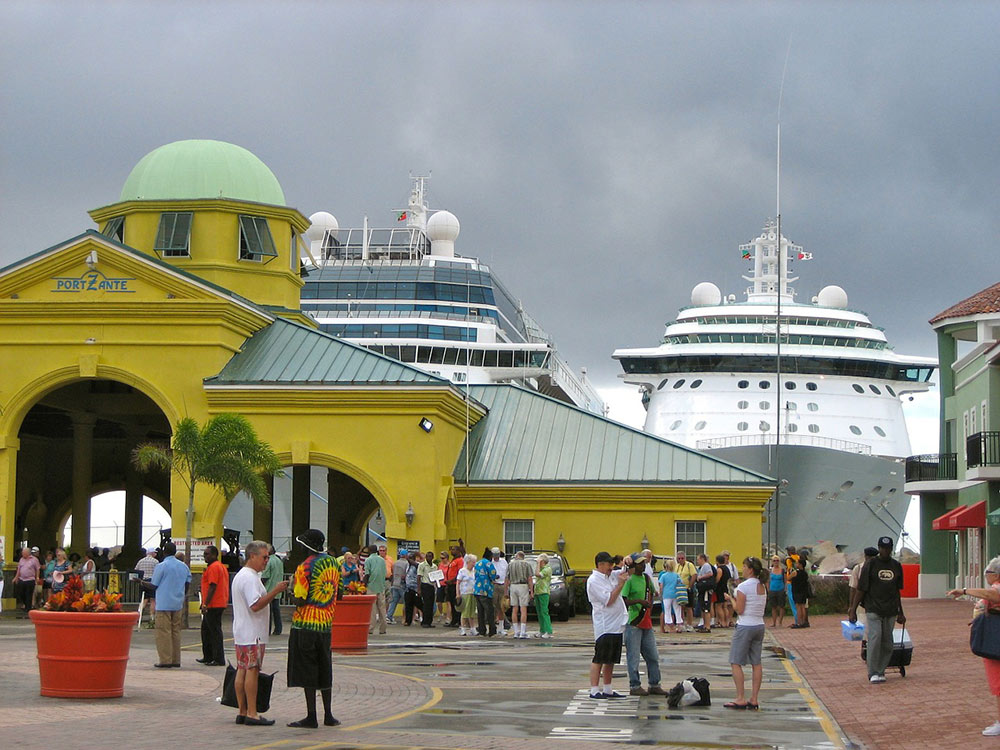 I would say it is really safe. There was a problem a few years back where there were some gang shootings but the government here made it a priority to sort out the gang crimes and since we moved to St Kitts we have never felt unsafe.

There are a few dodgy areas in Basseterre where you wouldn’t want to go walking at night time but we have driven all over the island into the remote villages and had nothing but warm welcomes from locals.

Tourists are welcomed by everyone too as it’s the biggest source of income for the island.”

What Is Your Favorite Thing to Do in St Kitts?

There are so many great dive sites around St Kitts and because the sea is warm all the time there is always time for diving.

There are a couple of dive centers around the island and most of our friends are certified so it’s a great weekend activity.”

Also Read: Why You Shouldn’t Take Seashells From the Beach or the Sea

What Is Your Favorite Place to Hang Out in St Kitts?

Our favorite restaurant is probably Rituals Sushi in Frigate Bay or a tiny Chinese restaurant called On My Way Oriental in Basseterre.

Our favorite bar is probably Shipwreck on South Friars Beach which is a really rustic beach bar that serves food and drinks until 6.30pm and has free sun loungers on the beach.

My favorite secret spot is definitely Majors Bay on the very end of the south east peninsula. This beach is completely uncommercialized meaning it is only frequented by expats and locals. We love packing up the car with a cooler and portable barbeque and spending the day ‘liming’ at Majors Bay.”

What Is the Expat / International Community Like in St Kitts?

“There is a large international and expat community on St Kitts because of the veterinary and medical universities on the island that attract international professionals.

It is pretty easy to find fellow expats living in St Kitts if you head to the Strip in Frigate Bay or to Shipwreck beach bar.”

Any Tips for Moving to / Living in St Kitts? 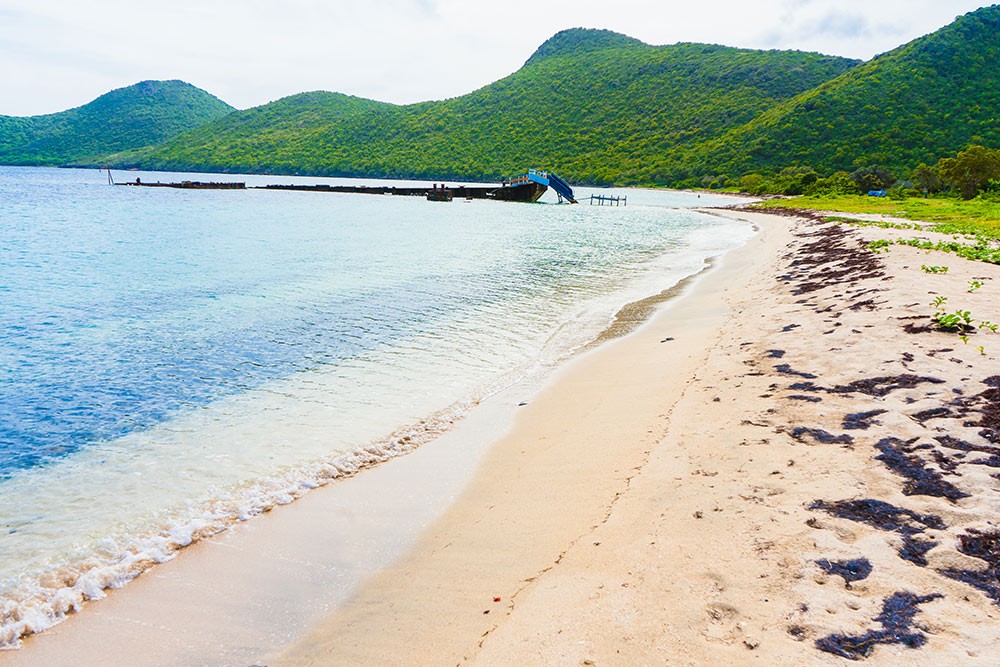 “If you are moving to St Kitts on a working visa get your paperwork in order well in advance because island time will slow things down!

Otherwise, it is relatively easy to stay in St Kitts on a tourist visa if you don’t need to work on the island or if you are working remotely. Tourist visas are 3 or 6 months depending on where you are coming from and can be renewed either by leaving St Kitts and coming back or paying for an extension.

Driving on St Kitts is like the UK or Australia as we drive on the left here. If you want to drive, you will need to obtain a temporary driver’s license from inland revenue or the police traffic department which costs $62.50XCD for 3 months or $125XCD for a year. After 3 years of temporary drivers licensing you will be granted a permanent license, or you can take your driver’s test here to get a permanent license right away.

Most rental properties come fully furnished so you won’t need to bring furniture or things unless you want to. We brought a lot of stuff and it was too much but luckily, we found a sparsely furnished apartment so we could fit our own things in.

The cost of living in St Kitts is higher than in some places. We have found it more expensive than Derby back in the UK because almost everything has to be imported. The cost of living is probably comparable to living in London. You can live cheaper if you buy local produce and there are many local farmers who set up stalls in Basseterre and sell produce cheaper than the supermarkets.

St Kitts also does a citizenship by investment scheme so if you are looking to buy property on St Kitts that is always worth looking into.”

Any Resources You Found Useful During the Process of Moving to and/or Building a New Life in St Kitts?

“SKNvibes.com is a good all-round resource for things like jobs, housing, and cars for sale.

ILPrealestate.com is one of the best realtors on the island and Shelley is great at finding the perfect property.”

Is There Something You Just Have to See or Do When You Are in St Kitts?

“Brimstone Hill Fortress National Park is fantastic. It was built in the 1600s and is a UNESCO world heritage site.

Snorkeling is always recommended; we have lots of turtles and rays on St Kitts so you are always likely to see them.

There are also many great hikes in the rainforest and around the volcano. And if you are not a confident hiker then there are various tour companies that will take you around the island and on hikes.” 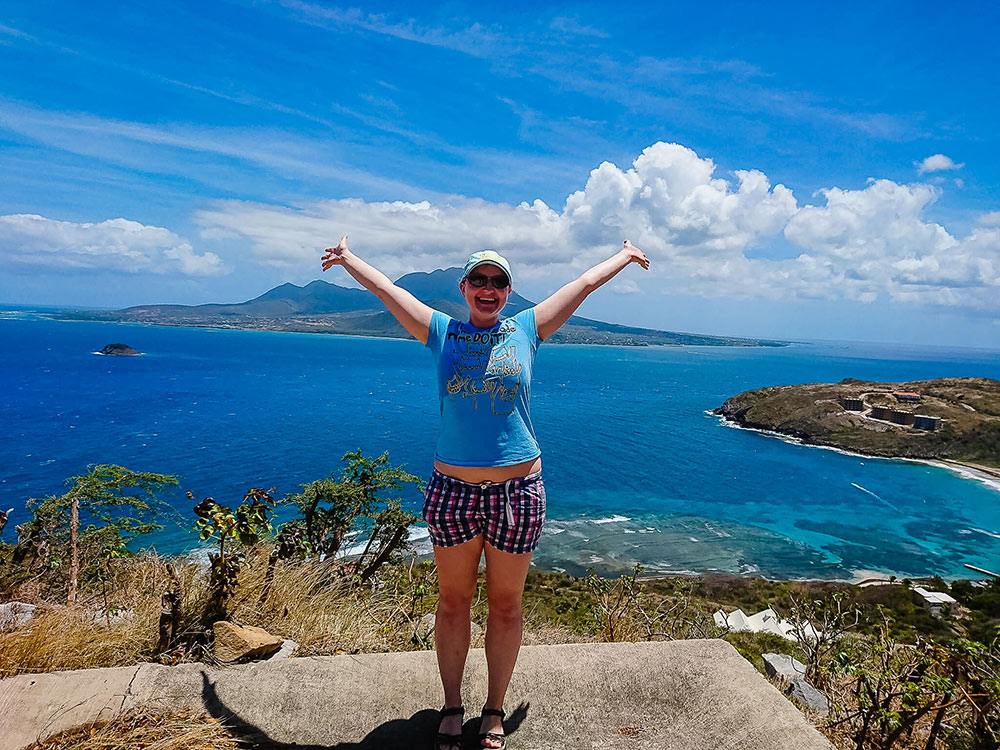 Steph is a registered veterinary nurse and the blogger behind Book It Let’s Go!

She is an expat originally from England currently living in St Kitts. She packed up her old life, her husband, and their 2 cats in 2019 to leave the cold and wet behind in exchange for beaches and palm trees.

Steph is currently enjoying being based in the Caribbean and plans to do some island hopping while planning her next big adventure. 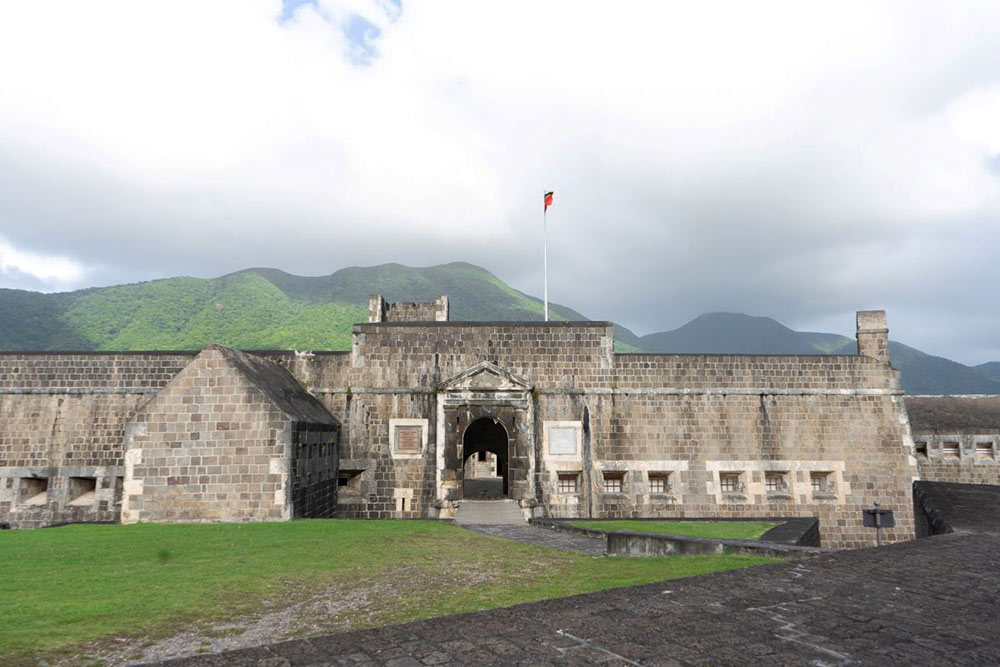 Saint Kitts is the larger of the two islands that make up the small Caribbean island nation of Saint Kitts and Nevis.

Saint Kitts was home to the first British and French colonies in the Caribbean, and thus has been titled “The Mother Colony of the West Indies”. St Kitts and Nevis are also the most recent British territory in the Caribbean to become independent, gaining independence in 1983.

The capital city is Basseterre, located on the larger island of Saint Kitts. Basseterre is also the main port for both passenger entry (via cruise ships) and cargo.

Saint Kitts and Nevis are separated at a distance of 2 miles (3 km) by The Narrows strait. Both are of volcanic origin, with large central peaks covered in tropical rainforest. The majority of the population lives along the flatter coastal areas.

The population of Saint Kitts and Nevis is around 53,000 and has remained relatively constant for many years. Approximately three-quarters of the population live on Saint Kitts.

English is the official language, but Saint Kitts Creole is also widely spoken.

Like this interview about living on St Kitts? Pin it! 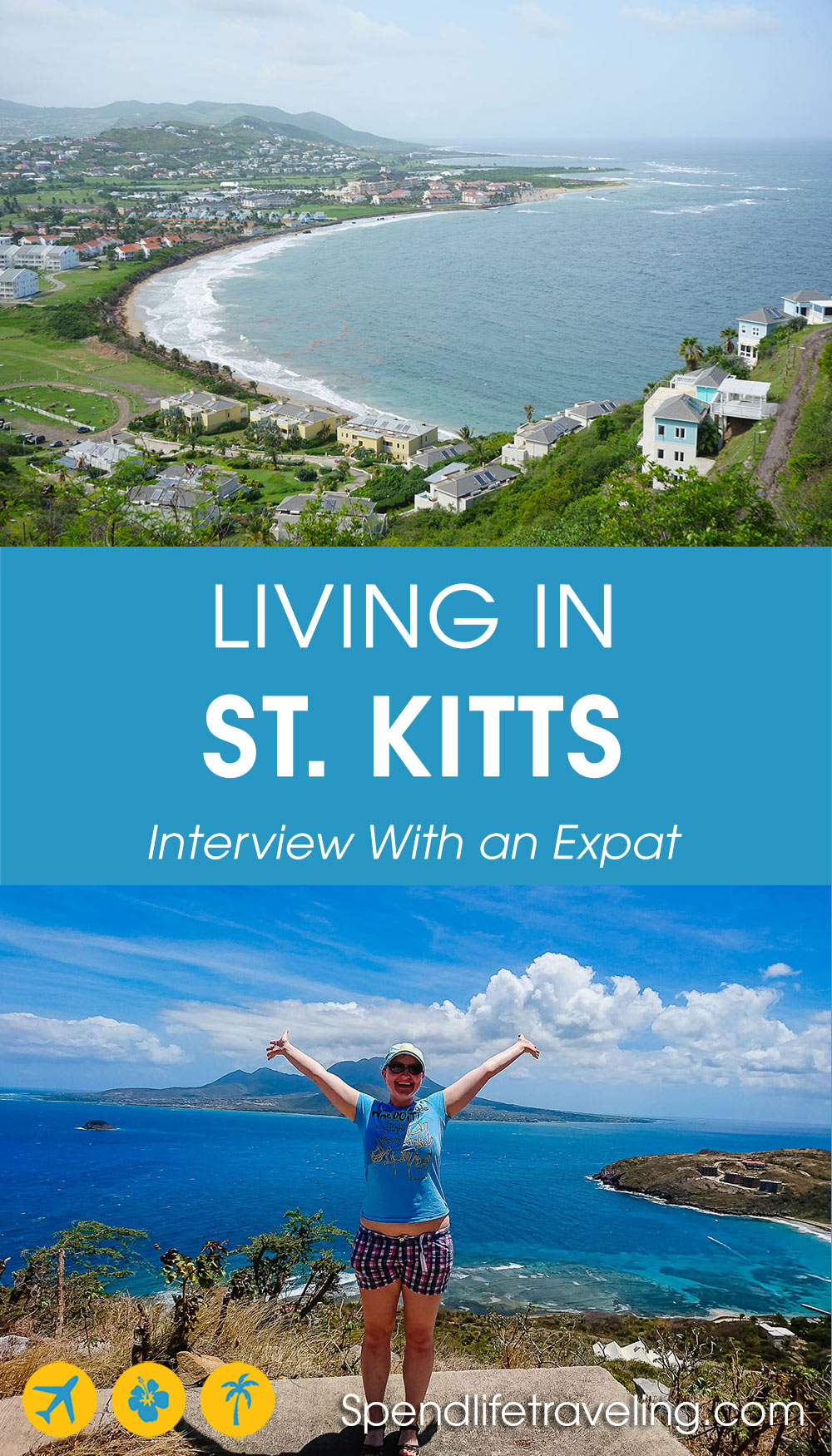