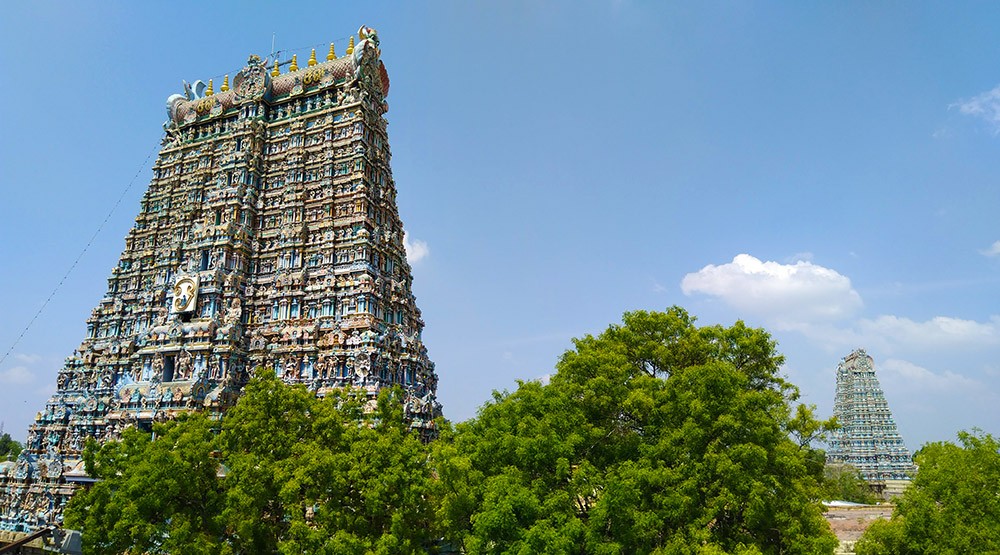 After my trip around Kerala, I traveled to Madurai. I have to admit, I had never heard of Madurai before, but I am very glad I went!

Why should you travel to Madurai?

Madurai is an energetic, ancient city in the South Indian state of Tamil Nadu. The city’s skyline is dominated by the 14 impressive and colorful gateway towers of the Meenakshi Amman Temple, which is a major pilgrimage site, attracting visitors from all over India and beyond.

What to See & Do on a Trip to Madurai

Madurai, with its rich history, has been nicknamed Athens of the East.

You could spend days, if not weeks roaming the streets, talking to the locals, and admiring the incredible buildings.

But, you probably won’t have weeks to explore Madurai. That’s why in this article I will share with you the main things to do in Madurai and the highlights of this city, so that you know exactly what the best tourist places in Madurai are and what else to see and do here.

10 Places to Visit in Madurai

For most people, this temple is the main reason to travel to Madurai.

Now let’s start with the name of this temple because that is where it gets confusing. If you are doing some research about tourist places in Madurai, you might find a wide variety of names for the temple: Sri Meenakshi Amman Temple, Meenakshi temple, Sri Meenakshi Sundareswarar Temple, Meenakshi-Sundareshwara Temple or Meenakshi Madurai Temple. They are all talking about the exact same temple.

This historic Hindu temple in the center of Madurai is one of the oldest and largest temples in India.

The enormous temple complex extends over an area of 65,000m² (700,000 square foot) and was first constructed 2000 years ago. Most of the present structure, however, was rebuilt after the 14th century, and further repaired, renovated and expanded in the 17th century.

The temple is dedicated to Goddess Meenakshi and Lord Sundareswara, who is an incarnation of Lord Shiva.

As a non-Hindu I find Hinduism a complex religion with all the different gods and different forms or incarnations of gods. I would therefore highly recommend getting a guide when visiting the temple. Plenty of guides will offer their services inside or around the temple and that will really teach you a lot about the temple, its history, and Hinduism.

It attracts over 15,000 visitors per day, so expect it to be crowded and allocate enough time because the temple really is massive!

Both the dress code and rules regarding what you can take into the temple are very strict (this was different in the past).

As a woman, wearing a dress or skirt that just covers the knees is not enough. Make sure it covers your entire legs and wear something that covers your shoulders. With men they seem more lenient but please dress conservatively.

Two of my friends were also stopped for carrying soft drinks, cigarettes, and a lighter. So my advice, since you can securely store your belongings at the entrance, store everything there. The last thing you want is to stand in line for half an hour to then be sent back by security because they found something in your purse or pocket that they didn’t like. You will also have to leave your shoes at this same place.

There are certain parts of the temple that can only be accessed by Hindus. These parts are clearly marked, in English.

There are actually several Gandhi museums in India and this might not be the most famous one, but it definitely is one of the main places to visit in Madurai.

Among the exhibits at the museum you can find the blood-stained garment worn by Gandhi when he was assassinated by Nathuram Godse and a letter he wrote to Adolf Hitler addressing him as ‘Dear Friend’.

It’s an interesting museum if you want to learn more about who Mahatma Gandhi was and what he did during his life.

The building that houses the Gandhi Memorial Museum is a historic palace built around 1670, belonging to Rani Mangammal of the Nayak Dynasty.

Opening hours: 9:30 am to 5 pm. But every Friday and every 2nd Saturday of the month are holidays.

It is famous for the stuccowork on its domes and impressive arches. Unfortunately only part of the palace remains, but it’s worth a visit and I wish I would have had time to see their daily light show.

Elu Kadal Street is an ancient street in the center of Madurai.

Elu Kadal means “Affluence of Seven Seas” and the street comes with an interesting legend. Legend has it that Kanchanamala, the mother of Goddess Meenakshi wished to take a sacred bath in seven seas. When Lord Siva heard about this he miraculously brought water from seven seas to Madurai and formed a tank in this street to house the water, to help his mother-in-law take her bath.

Today there is still a Siva temple, on the western side of the tank, believed to have been worshipped by Kanchanamala and her husband Malayathuvasan.

On my trip to Madurai I took a walking tour of the city with Storytrails who told me this and many other interesting stories about Madurai. Because Madurai’s history is so rich and complex, I can highly recommend a guided tour!

There are two big and impressively decorated wooden temple cars at the center of the East Masi Street. The cars are mainly used in processions to carry images of gods and goddesses.

They are incredible works of art and if you go on a guided tour you will learn a lot about the history and the usage of the cars, plus the different gods and celebrations.

But even if you don’t, check out these cars just to see how big they are and imagine them being dragged around the city in a procession… Very impressive!

These are ten pillars in a lane (hence the name), on the northern side of the Thirumalai Nayak Palace.

It’s a small sight but worth a visit because of its historic value.

This is a famous temple tank located about 4 km east of the Meenakshi Amman Temple.

Literally, Teppakulam means ‘temple pond’. It is mainly used for devotional festivals and famous for the colorful Float Festival held here around January/February.

When I visited there was no water in the tank but most of the year there is. Again, if you want to learn more about the history of all of these sights in Madurai exploring the city with a guide is highly recommended.

Although Madurai is predominantly a Hindu city, there is also a notable Muslim and Christian influence.

The Goripalayam Dargah or Goripalayam Mosque is the largest mosque in Madurai. It contains two graves (tombs) of Sultans of Yemen and the invisible grave of Khaja Syed Sultan Habibuddin Razi, also known as Ghaibi Sulthan, who came to India to spread Islam.

It is said that the mosque was built by Thirumalai Nayak for his Muslim subjects. 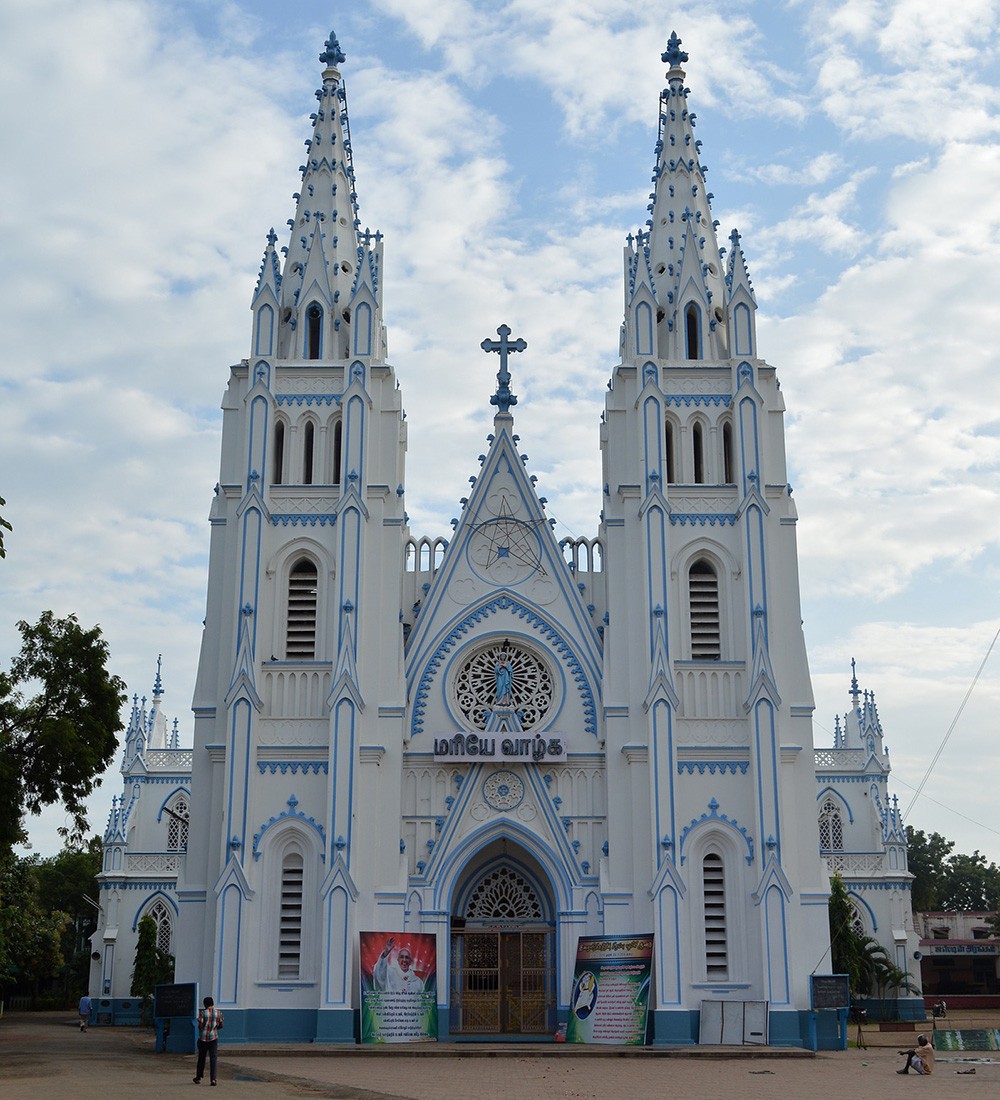 This church was originally built in 1841 as a small chapel for about 30 Christian families in the area.

It received the status of cathedral in 1969 and is now the seat of the Madurai Roman Catholic Archdiocese. 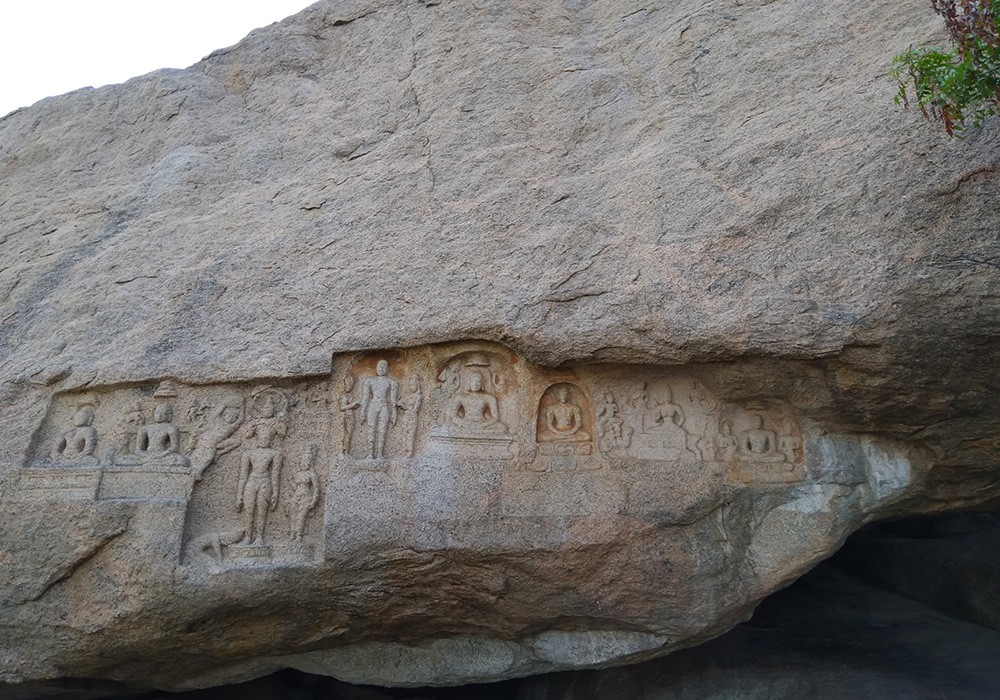 Another religion you will find in Madurai, if you look closely, is Jainism.

Jainism is an ancient Indian religion that teaches that the way to liberation and bliss is to live a life of harmlessness and renunciation. There is still a small minority in Madurai that practices Jainism.

If you want to know more about Jainism I suggest planning a guided tour to one of the Jain caves around Madurai.

Most caves are located on the periphery of the city and involve a short hike up a rocky hill, giving you a good view of Madurai.

I visited the Jain Cave listed on Google maps as ‘Jain Sculptures’, north-east of the city. Another popular location is Keelakuilkudi, at the foot of the hill Samanamalai.

You’ll find a wide range of shops throughout Madurai and if you are looking for souvenirs, clothes, jewelry, etc. you will enjoy shopping in Madurai.

But apart from all the shops you see when you are exploring the city, I want to highlight a few specific places worth visiting during your trip to Madurai.

Pudu Mandapam is a 17th century stone structure right next to the Meenakshi Temple. People in Madurai will tell you this is the oldest mall in the world.

It houses a wide range of small shops. From clothes to jewelry, bags and random knick-knacks. If you are looking for souvenirs, check this place out!

Madurai is known for the trade of flowers and vegetables and is often called the city of markets.

So a visit to a market, and especially the large Mattuthavani flower market (also referred to simply as the ‘Madurai Flower Market’), is a must.

It’s a great look into local life in Madurai.

Both malls offer a wide range of modern shops, similar to malls around the world but with many regional and national brands.

What to Buy in Madurai

Madurai is a hub for textile and jewelry, making those the two obvious choices for what to buy in Madurai.

If you are looking for something unique, then get yourself a Sungudi Sari. Madurai Sungudi is a cotton fabric of Madurai, which is an exclusive textile product traditionally produced using tie dye method by people from the Saurashtra region who migrated to Madurai in the 16th century.

But, you will also find plenty of “classic souvenirs”, from keychains to T-shirts, with plenty of options that are locally made.

Brassware is another popular thing to buy in Madurai.

And, with Madurai being nicknamed ‘the jasmine capital of India’, buying jasmine (malli) is also a favorite of many visitors.

One of the things I love when traveling is trying all the local food.

Foodies Day Out offers a great food tour in Madurai, taking you to some hidden gems to taste Madurai’s delicious food.

But, whether you join their tour or not, definitely try some idli (Madurai’s comfort food), a dosa (one of my favorite things to eat in India) and a Tamil style thali served on a banana leaf.

I was surprised to see that the food in Madurai is quite different from the food in neighboring Kerala. That’s definitely one thing I love about India: it’s such a big and diverse country that every part you travel to offers a different experience!

Also Read: Street Food Recipes From Around the World

I want to thank Madurai Travel Club for inviting me to travel to Madurai. I had a great time getting to know this city and its people.

Tip: Madurai has a big annual celebration, the Chithirai Festival, in April. If you plan to travel to Madurai around that time, don’t miss this festival!

Or get a taste of the folk arts of the region by joining a live performance at Kadambavanam’s Culture Center, just outside of Madurai.

Map of Places to Visit in Madurai

Like this article about things to do in Madurai, India? Pin it! 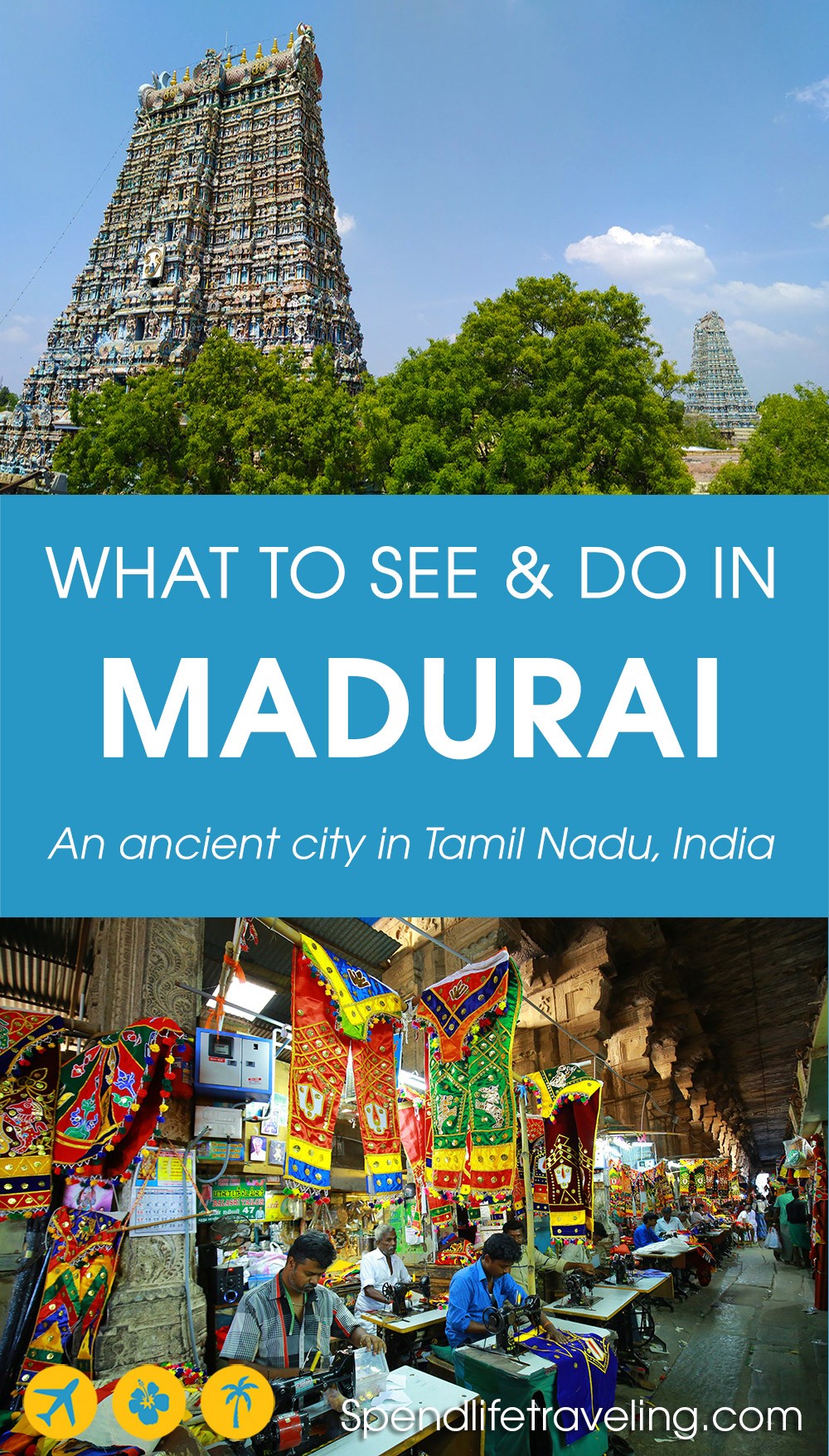 Disclaimer: although my trip to Madurai was sponsored by Madurai Travel Club, as always all opinions are my own.