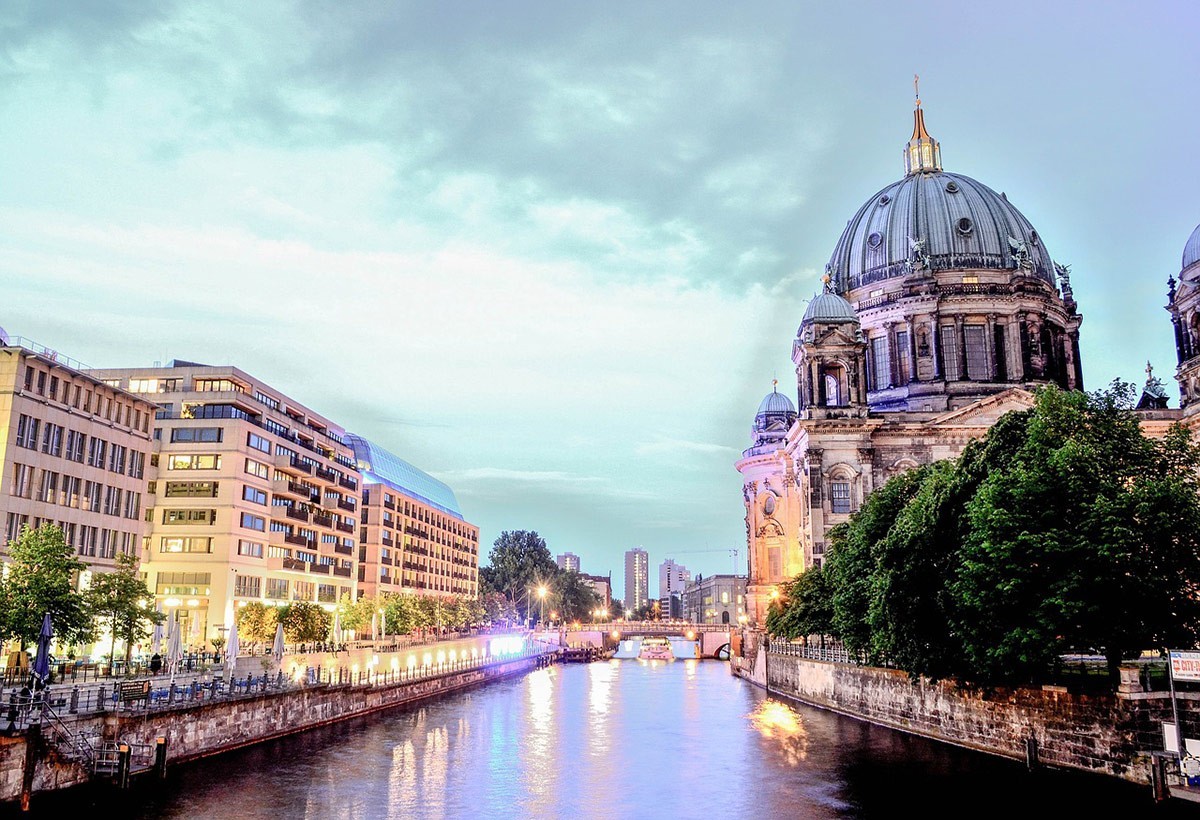 What is it like to move to and live in Berlin?

Berlin is known as a liberal city with a lot of possibilities and people from all over the world like the idea of living in Berlin. But is it really a good city to move to?

I interview Caroline who moved here from the USA.

This interview is part of the Ask an Expat series. In this series, I interview people living all over the world but outside of their home country. I try to help paint an honest picture of the ups and downs of life abroad, share tips about moving to the city, town or country the expat lives in, and information about what to see and do here.

Why Did You Move to Berlin?

“My university in the United States offered study abroad programs in dozens of countries around the world, and that had been something I’d been dreaming about since I got to college.

I chose to move to Berlin specifically because I knew I wanted a political, progressive city and somewhere that was slightly off the beaten path compared to most people from my university who generally picked a far western European country, like the UK or maybe Spain.

Berlin is also PACKED with history and things to do, so you can never, never get bored.

While I’m here as a student, I’m sure my experiences can be helpful for those moving to Berlin for work, too.”

Also Read: Things to Know Before Moving to Germany

“I love how it’s the most eclectic city in – dare I say it – all of Europe. I have yet to visit another city like it.

When I first arrived in Berlin, I remember being really confused because it wasn’t how I pictured it. It is not a traditional, pretty, or really aesthetically pleasing place.

What confused me at first is what eventually made me fall in love with the city, though. You can see how diverse it is in the materialistic and physical aspects all over the city.

The buildings are a conglomeration of historically preserved and modern designs. No two buildings are the same. Some are preserved from before the war and have the more “traditional” European design, while some look really retro.

Also, the food options are expansive. You could really easily get by regardless of preference or restriction. Tip: Follow @eatingberliner on Instagram to look for awesome recommendations.

Berlin is also unique on a deeper level in terms of the people and culture. I’ve never lived in such a racially and religiously diverse place. Every type of person you can possibly think of lives here.

That being said, you can also dress and look however you want and there’s a large feeling of acceptance here. On the U-Bahn (Berlin’s metro), you can see outfits that would be considered wildly inappropriate or really, really bizarre in other cities, but here nobody even looks twice.

I really like the freedom of expression here. In a way, it feels similar to New York City back in the states; Berlin is progressive, open-minded, diverse and historic.

Finally, Berlin is a VERY livable city. Some places in Europe I’ve visited are nice to visit but might be difficult to live in. Living in Berlin, on the other hand, is budget-friendly, the city has great transportation and is booming in terms of job opportunities.”

What Do You Dislike About Living in Berlin?

“This is a really petty issue, but I don’t like how long it takes to get somewhere.

Berlin is nine times the size of the city of Paris, and taking the U-Bahn it can take an hour to get just a couple of miles.

You have to really time manage if you live in Berlin. But, I do think that people who have been more exposed to a public transportation lifestyle might not notice the difference as much as I do because they’re used to planning.

When moving here, finding a place to live near some form of a public transportation stop is not difficult as most places have a stop every couple of blocks. This makes commuting a lot easier with less walking.

I drive mostly in the United States, so it’s been an adjustment and that’s probably something to take into consideration.

I truly don’t really have anything that I dislike about living in Berlin beyond that.”

What Is Your Favorite Thing to Do in Berlin?

“The nightlife is really cool here and can be whatever you make it. They have some really cool, quieter, hidden speakeasies and bars, but also some of the wildest sex clubs in the world if that’s what you’re into- Haha.

My favorite thing is hanging out and exploring the areas in Schöneberg, Neukölln, and Kreuzberg.

When the weather is warm, I really love the Biergartens all over the city. You can sit outside by rivers and lakes with friends.

My favorite places are Café Neu am See in Tiergarten, and Klukerkranich in Neukölln. Both of them are somewhat touristy but don’t really feel like it once you’re inside.

There’s also a lot of WWII museums here that are really fascinating to visit if you’re interested in that.”

What Is Your Favorite Place to Hang out in Berlin?

“I mentioned this a bit before, and I definitely don’t have a single place that I like because I can’t pick just one!

Another great area is Akazienstraße in Schöneberg for boutique shopping and great local restaurants.”

What Is the Expat / International Community like in Berlin?

“Berlin is extremely diverse and attracts people from all over the world. It’s really common for me to walk down the street and hear a lot of different languages.

English is widely spoken here, too, so I usually don’t have a problem if I need something that my poor understanding of German can’t explain.

There are also a LOT of online resources for expats who are considering moving to Berlin. I’ll mention those down at the bottom of this post.

You will find a lot of international / expat groups and places all over the city. From yoga studios and recreational groups to foreign doctors. This makes building a life in Berlin a lot easier!”

Any Tips for Moving to / Living in Berlin?

“I used several websites to search for a place to live in Berlin:

All of these websites have an English version to help you find a place if you don’t speak German.

I ended up booking my apartment using ComingHome, and I genuinely cannot recommend them enough! I didn’t pay commission to anyone, or any extra fees when booking, and they are extremely helpful. Being in the US and booking an apartment that you’ve never seen can be really scary, but they made the booking process significantly less overwhelming.

Most of these websites also help finalize financial aspects, lease agreements and will reach out to the landlord to answer any questions you have. You can also request a visit of the home before you book it, if you’re already in Berlin.”

Also Read: Where to Live in Berlin – the 10 Most Popular Neighborhoods

Any Resources You Found Useful During the Process of Moving to And/Or Building a Life in Berlin?

“Apart from the resources I mentioned above, I really recommend using Facebook groups to connect with other expats living in Berlin.

If you’re interested in a specific sport or activity (for example, I really like taking Yoga classes here), searching in Google for classes in your area worked for me, too.

I also believe that Meetup.com is common, although I’ve never used it.”

Is There Something You Just Have to See or Do When You Are in Berlin?

“The big landmarks, like the Brandenburg Gate, or the Memorial to the Murdered Jews of Europe are great.

I obviously recommend the bigger, touristy things to do in Berlin which you can find in every guidebook, but there’s also a lot more to see and do beyond that.

All of the neighborhoods around Berlin are really unique and each is worth exploring.

Here’s a brief list of less well-known things I recommend checking out in Berlin:

Specifically, the memorial titled “Places of remembrance in the Bavarian Quarter: Exclusion and disenfranchisement, expulsion, deportation and murder of Berlin Jews in the years 1933 to 1945”, located in Schöneberg by the U7 line.

It’s a series of signs located within a few blocks that list the slow and subtle deprivation of rights to Jewish people over the years. You have to somewhat look for the signs, which is partially the point. 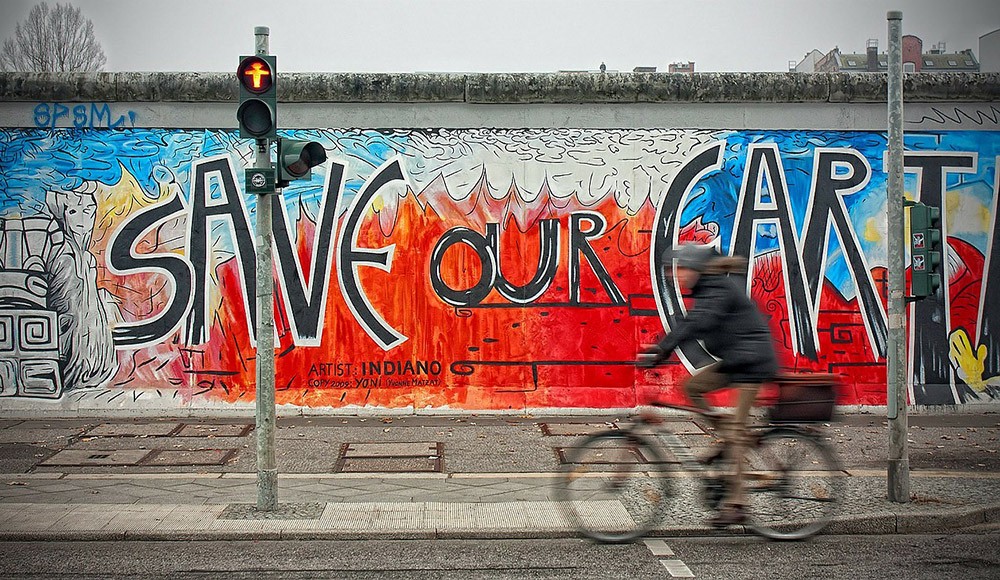 Some companies can be definitely touristy, but I really enjoyed the one I went on.

If you’ve never visited Berlin, something to note is that it is COVERED, and let me repeat that- COVERED- in graffiti. It is on quite literally every building and spot in the entire city.

The meanings can be ambiguous when you pass by without an explanation, but there are actually a lot of meanings and neat stories behind them.

3. Enjoy the Speakeasy and Bar Culture

I’d share my favorites, but then they wouldn’t be a secret anymore! 😉

The one in Mauerpark is the most popular, but you can find some in all of the neighborhoods.

I like the one in Winterfeldplatz. And I’ve heard great things about the Thai Market on Sundays.

A park located in southwest Berlin which is a much quieter and more local park compared to Tiergarten.

While I love Tiergarten and the surrounding area, Grunewald is great if you want something a bit more local or quiet.”

Caroline is originally from Dallas, Texas. She is studying Political Science with an International Relations major, and a minor in Criminal Justice. She is currently living in Berlin and will stay here for at least 13 months. 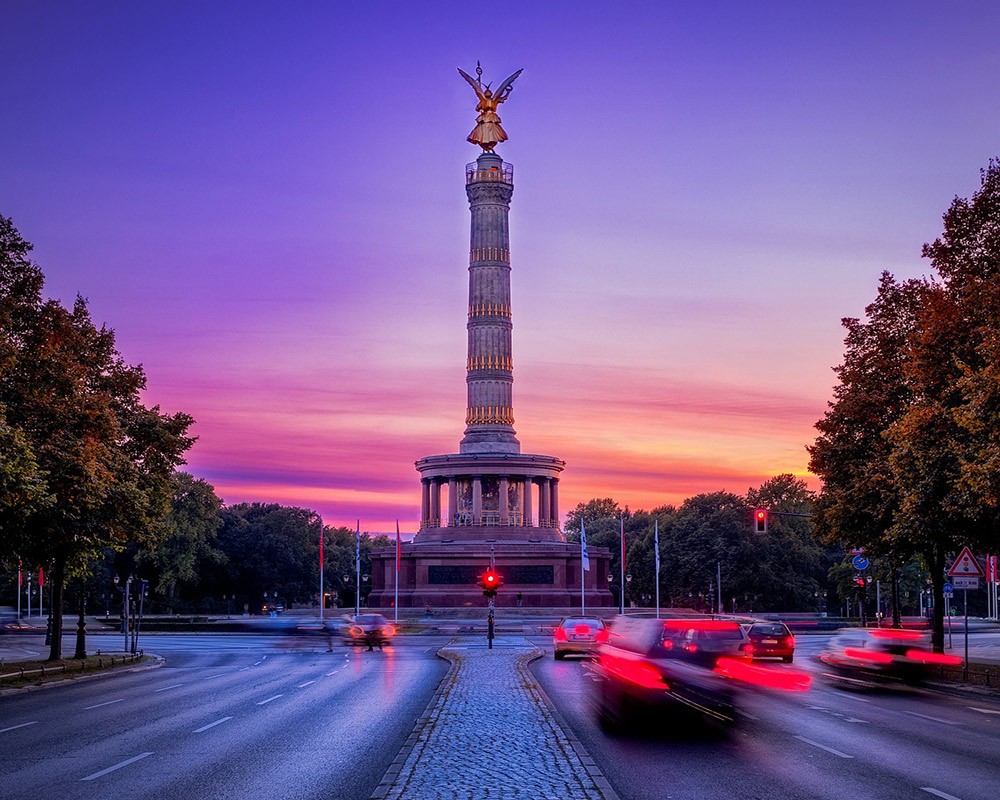 Berlin is the capital and largest city of Germany with roughly 3.7 million inhabitants from over 190 countries.

Berlin is known for its internationalism and tolerance, lively nightlife, its many cafés, clubs, street art, and numerous museums, palaces, and other historic sites.

Although badly damaged in the final years of World War II and broken apart during the Cold War, Berlin has reconstructed itself greatly, especially after the fall of the Berlin Wall in 1989.

Berlin’s architecture is quite varied and it remains a city with many distinctive neighborhoods.

About one-third of the city is composed of forests, parks, gardens, rivers, canals, and lakes.

Berlin is a global city of culture, politics, media, and science. Its economy is based on high-tech firms and the service sector, encompassing a diverse range of creative industries, research facilities, media corporations, and convention venues. Some significant industries are IT, pharmaceuticals, biomedical engineering, clean tech, biotechnology, construction, and electronics.

Berlin is known for its high quality of living and since the 2000s the city has seen the emergence of a cosmopolitan entrepreneurial scene.

Berlin is home to world-renowned universities, has numerous orchestras, museums, and entertainment venues, and is host to many sporting events. With the world’s oldest large-scale movie studio complex, the city is an increasingly popular location for international film productions.

Like this article about moving to and living in Berlin? Pin it! 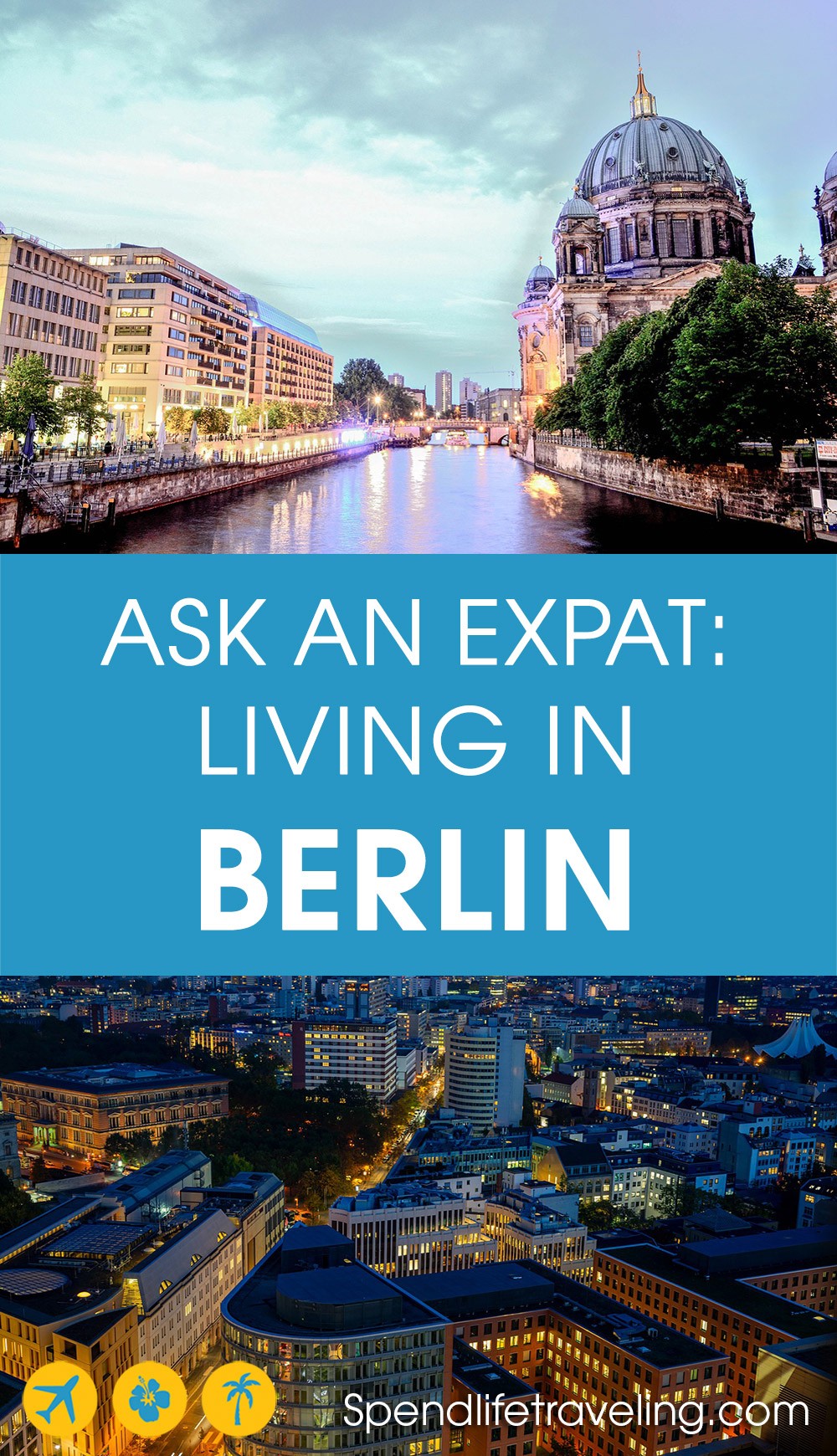 This blog about life in Berlin contains affiliate links. I may receive a commission for purchases made through these links, at no additional cost to you.

1 thought on “Ask an Expat: Living in Berlin, Germany”