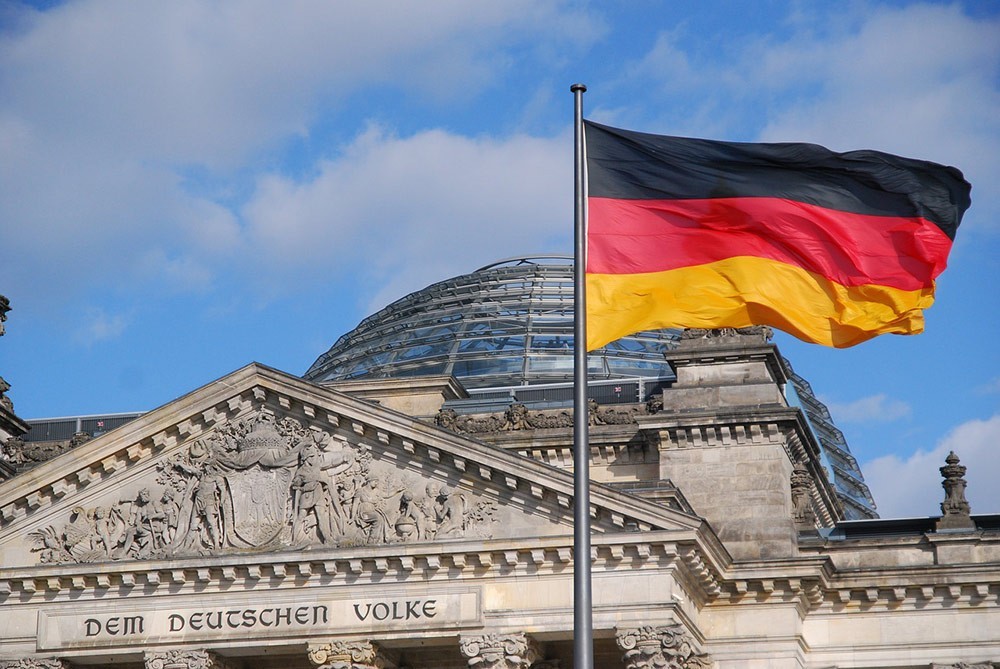 Are you thinking about moving to Germany?

In 2017 I decided to change my life drastically and move to Germany, to Berlin. I jumped into a totally different country, culture, traditions, language, and rules.

For me, it was a big step, and at times I found it difficult because I wasn’t aware of many important things!

But, now that I am settled in, I know that moving to Germany was one of the best things that I have done in my life!

I, therefore, want to share with you some of the things I wish I knew before moving to Germany and some practical tips.

10 Things to Know Before Moving to Germany

1. Where in Germany Will You Live

Where in Germany are you moving to? Berlin, Hamburg, Bonn, or maybe to a smaller town?

If you already accepted a job in a specific city well then at least you know where in Germany you will be living. If your options are still open, then don’t rush your decision!

Firstly, understand what your priorities are. What do you want to get from the place you choose to live in? Are you looking for a strong international community, a slower pace of life, being close to the sea or nature…

After working that out, start to research different parts of the country or the specific city want to move to.

I know many people who came to Germany and moved to another city every year until they found where they feel at home. But moving around all the time – can be very hard!

These articles can be useful to get an idea of what life in Germany is like in different cities:

2. Dealing With the Language

Thankfully, most of them also speak English and that can save you for a while.

Moving to a more international city (like Berlin) can definitely give you some more options to speak in different languages – Russian, Turkish, French, Vietnamese and so on. But if you really want to settle down in Germany long-term, then learning German is a must!

Speaking German is very important for finding a job (with most companies), for getting different documents, for dealing with government institutions and in general for making the most of life in Germany.

This is a big contrast to neighboring the Netherlands for example where you can easily live and work without ever learning the language.

And, you should also be aware that learning German can take a long time and a lot of willpower (and money). German grammar is not the easiest and they love very long words, like ‘’Kraftfahrzeughaftpflichtversicherung’’, which means ‘’car liability insurance’’.

But don’t worry, there are plenty of schools, courses, teachers and different ways to learn German. And I would say – if thousands of people have already learned German as their second or third language, then you can too!

If you are looking for an online teacher to teach you German then Italki is the most popular platform to use. Or if you’d rather do an online course without a tutor then check out Rocket Languages.

Finding a place to live in Germany is hard work!

In Berlin, it took me 6 months to find a long-term place to live, and for one of my friends it took a full year!

So please, count on it not being easy and taking time and effort. German landlords tend to ask for 3 months of salary statements, they seem to favor married couples (especially if one of you is German) and if someone could vouch for you being a respectful and quiet tenant, then that would really help.

In Germany’s cities, it is hard to find a flat because of high demand and increased prices. But the biggest problem for you as a foreigner moving to Germany, is about documents!

To rent an apartment officially, you need to have a bank account, but in order to open a bank account – you need to prove your registration (your actual address in Germany). This is a very serious factor to think about before moving to Germany.

Unless your company can arrange housing for you, you might want to start by renting an Airbnb (which can get pricey) or a mid-term rental through a platform such as Uniplaces first.

Also Read: Where to Live in Berlin – The Most Popular Neighborhoods

After renting an apartment, you will definitely need to furnish it!

In most cases, when you rent a place long term in Germany it will be unfurnished, completely.

You could be lucky (like me) and find a place that at least has a fully equipped kitchen, a fully furnished bathroom (toilet bowl, shower, and a sink) and a closet! But, many apartments are completely empty and don’t even have light fixtures!

But furnishing an entire apartment costs a lot, right? Don’t worry, thankfully there are ways to furnish your new home cheaply or even without spending money!

You can find many cheap things offered in your local newspaper but my favorite is the website ebay-kleinanzeigen.de. There is a section ‘’verschenken’’ (which means “give away”) that has helped a lot of people I know furnish their homes!

I have to admit, initially, after I moved to Germany, I was very skeptical about taking used furniture, like tables, chairs, and shelves for free. Is it really possible to get something good for free? But after I tried this website and found some very good quality, beautiful furniture, I understood, that this way of furnishing is actually genius, and life-saving!

You might think that the stereotype of German’s bureaucracy and piles of paperwork is a myth, but unfortunately, it’s not!

After moving to Germany you will start to receive many letters, starting with your German bank cards and PIN code, and ending with a bill for radio (whether or not you have a radio, you will still need to pay for it).

Germans love paperwork. They don’t care about paper saving, no, not at all, and if you have never visited a post office or written a letter, then in Germany you will definitely learn this too!

You will need to check your mailbox every second day! If Germany were to have a nickname, then I would say it would have to be ‘’The Bureaucracy’’!

Germany is well known for having an excellent public transport system and some of the best roads in Europe. And I have to agree with that!

The roads in Germany are built for all kinds of transport and you can get everywhere from anywhere. The public transport isn’t cheap, but it is clean, mostly runs on time and very frequently – sometimes with less than a 5-minute interval.

Public transport is so good, that telling the boss you’re late because of the bus or train, won’t be acceptable. Order and timeliness are a big thing here and things tend to be very well organized.

Bicycles are something that Germans love a lot too. It is a cheap, healthy and nature-friendly mode of transport.

Cities in Germany are very bicycle-friendly – almost all roads have a specially designed lane for bikes. And, when moving to Germany, the bicycle is also the best and the cheapest way to get to know your surroundings.

Yes, the Germans love their rules.

And although depending on where you come from, it might be something to get used to, let’s be honest, the more people respect the rules, the more orderly a place we’ll live in!

Germans have written and unwritten laws that you will only learn with time, after you’ve moved here. It’s impossible to tell you everything now.

Just be careful at the beginning! Don’t cross an empty street if there is a red pedestrian light. Most likely you will hear something like: ‘’Children killer’’. The logic behind that comment: if children see how you are breaking the law, there is a possibility that they will follow your example, and what if they would be hit by a car?!

Germany is also very pro-recycling which is great! However, sometimes it can also go so far that you or your children could be criticized for putting things in the wrong recycling bins. Eco-friendly habits here are a lifestyle.

And one more very important thing – don’t be late! Germans are good planners and generally do not appreciate someone being late. It’s better, to be ‘’pünktlich’’ (punctual)!

Like every nation, Germany has a specific culture and at first parts of their culture might feel strange to you, but that could be said about any culture.

Most foreigners see Germans as cold people who don’t love hugs and kisses on the cheek. Yes, they like their personal space but they value real friendship very highly.

After their initial coldness, they love to talk, talk, and talk! So be prepared to brush up on your political or philosophical knowledge. It is also totally normal to start talking to someone you don’t know. It happened to me so often that I began to love these small conversations because they can really make you smile!

Be careful though, it’s better not to raise topics like the Second World War and Adolf Hitler. They can be very sensitive about this, so it’s better to just avoid such conversations. If you don’t want to get into an uncomfortable situation, it’s better to respect their history and sensitivity.

Whilst many Western countries are becoming cashless societies, the Germans aren’t rushing into it. They like cash and in many restaurants, small shops, bars, and clubs paying with cash is the norm.

I don’t know exactly why this is, but just be sure to have some cash in your wallet, and not only your card!

Most foreigners when they first visit or move to Germany don’t know about one very important fact – Sundays in Germany are sacred.

Sunday is called ‘’Ruhetag’’ – a rest day. It really is a day for slowing down and relaxing.

Most shops, cafes, and other stores (except gas stations and a few restaurants) are closed on Sundays! This means that in Germany you need to plan your shopping and make sure you have food in the house for Sunday.

However, you’ll find some shops open on this ‘sacred day’ if you urgently need something, but things there can cost a lot more than in your regular shops.

Sunday being a rest day also means not having parties, not listening to loud music, and for some not even doing laundry or vacuum cleaning.

It may appear very strange at first, but when you accept these things, you’ll understand how good and important it is to just relax – take a walk, write, read a book, watch Netflix and make pancakes for your family!

But don’t let it put you off! I love living in Germany and although it took some time, Germany feels like home now.

Like this article with things to know before moving to Germany? Pin it! 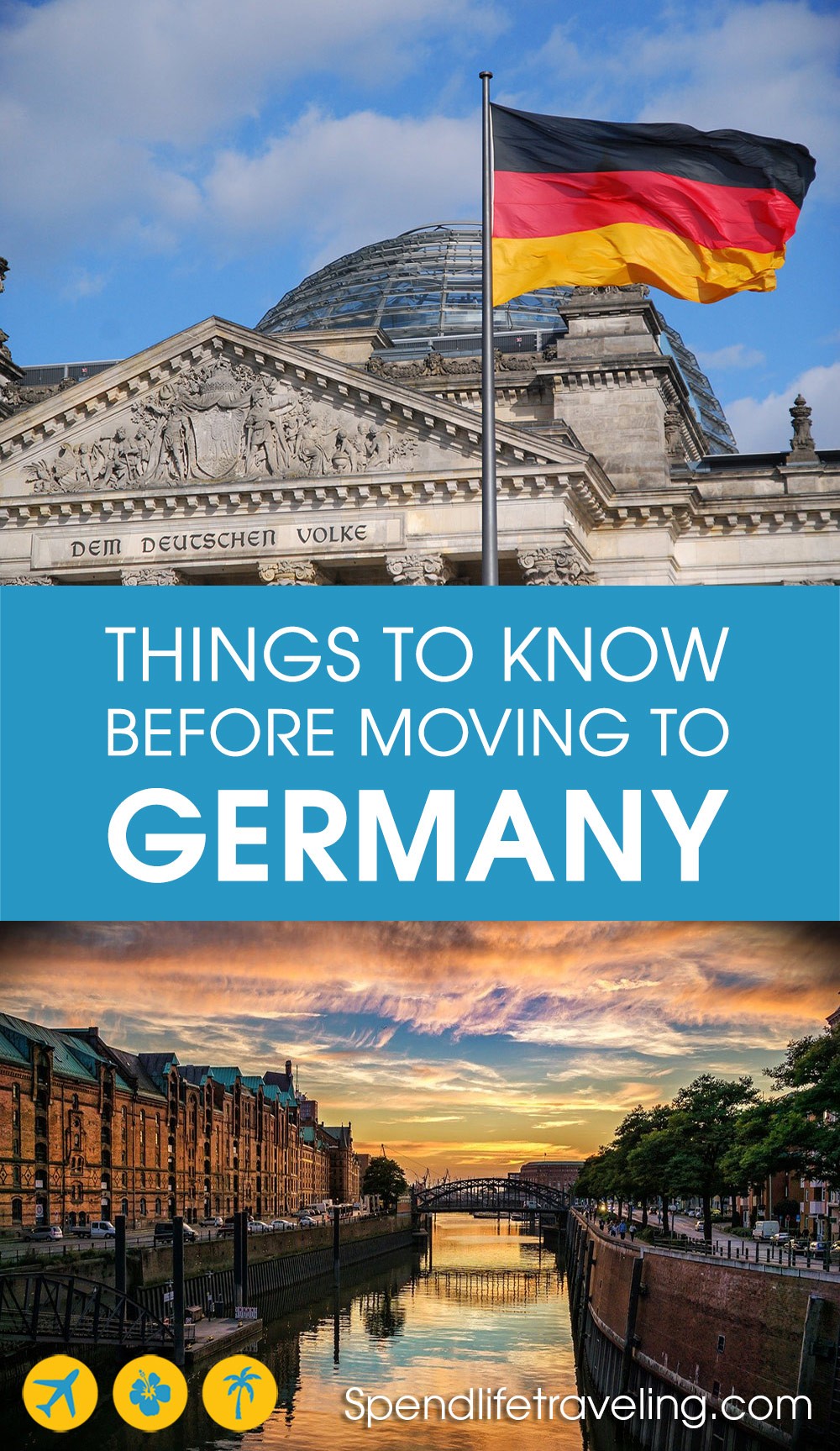 This blog about moving to Germany contains affiliate links. I may receive a commission for purchases made through these links, at no additional cost to you.