Oxford is a popular university city in England, but it also attracts expats from all over the world. “I have literally always loved traveling. My most treasured childhood memories are connected to excursions and trips that I took with my parents.

While attending university, I took my first part-time job just to be able to pay for my travels on my own. I visited several towns and capital cities in Italy and Europe: Rome, Florence, London, Paris, Barcelona…

I traveled alone, as a couple, and with friends. And I lived fantastic experiences! Traveling is the perfect way to discover behaviors and personal preferences.

Now my job allows me to visit new/old cities: I’m a photo editor and art organizer, so I have the chance to discover or re-discover the locations where my expositions and courses have been.

I’m a digital nomad and I feel super lucky to have the opportunity to travel for passion, work, and other personal reasons.”

Why Did You Move to Oxford?

“My boyfriend Luca and I decided to move to Oxford after spending 2 years living in Paris.

He is a data scientist working for cancer research and his job has brought him around the world. Scotland, for five years, Paris for two, and now Oxford.

The most difficult step for me has been the move from Italy to Paris. It was my first time as an expat and I remember I was scared, I cannot deny it, about everything.

I had already been to Paris several times and I was totally in love with the city, but a relocation is something completely different. It has been a transformation of my life, but I realized that I underestimated the pros and overestimated the cons.

When I moved to Oxford, I was certainly more aware of what I was doing and I went through the relocation in a more relaxed way, open to what this new city and new country can offer.”

“I have totally fallen in love with Oxford.

Maybe you think of Oxford as an academic city with universities, colleges, and libraries everywhere. And yes, they are there. It is incredible and really inspiring to be living so close to the places where so many notable people studied. I’m thinking of Oscar Wilde, Stephen Hawkins, John R.R. Tolkien, Indira Gandhi, and Thomas S. Eliot.
All of this “culture” instills a sense of classicism and elegance into the city.

But please don’t think of Oxford as a Gothic, gloomy place. You couldn’t be more wrong.

Oxford is a lovely city, especially during spring, when the peach trees throughout the city start to bloom. They perfectly match the colored houses and shops in the city center.

And then there is the natural environment: the Botanical Garden is a charming place, full of greenhouses and plants and flowers of several different types.

And around all of Oxford you can find the beautiful English countryside: you can walk along the Thames river or bike around within the Oxfordshire.”

What Do You Dislike About Living in Oxford?

“I didn’t find many negative things about living in Oxford. But there are a few.

On Sundays practically everything closes at 5 pm. Museums, galleries, malls, public parks, grocery stores, and even some coffee shops.

Furthermore, Oxford is the second most expensive city in the UK. It is certainly cheaper than Paris but… that’s it, it is not as affordable as other English cities, especially for students.

Lastly, but this might be because I am Italian, I find it a bit odd to see people having dinner at 6 pm or a cocktail at 8.30 pm. We used to have dinner and after dinner drinks much later.

But, every country has its own peculiarities.”

What is Your Favorite Thing to Do in Oxford?

“I think what I love most about life in Oxford is simply the possibility to walk around and discover the city.

I like walking around while enjoying a sunny day, with no destination, taking pictures, smelling flowers, and drinking a bubble tea.

Also I love creating photography projects which I then share on my Instagram account. They are about different themes related to Oxford, England, and my travels.”

What is Your Favorite Place to Hang Out in Oxford?

“I love The Grand Café, the first coffee house in England, established in 1650. They have a great selection of teas and sweets, including the famous scones.”

What is the Expat / International Community Like in Oxford?

“Oxford is certainly an international city, because of the universities.

I think the biggest expat communities in Oxford consist of French, Spanish and Italian people. But there are plenty of people from other countries living in Oxford too.

And you will also meet a lot of English people from other parts of the United Kingdom.”

Any Tips for Moving to / Living in Oxford? 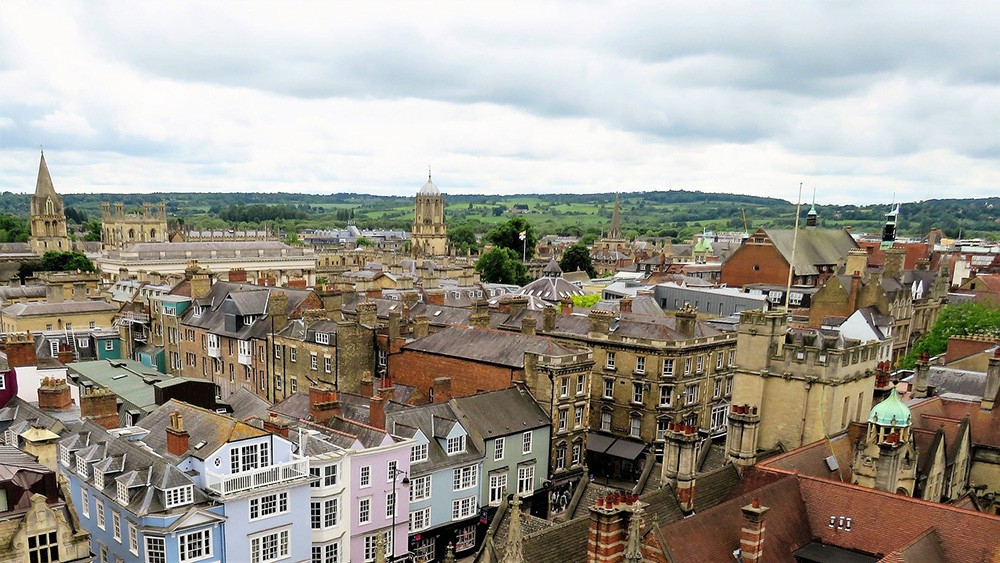 “If you are thinking about moving abroad, independently of the place, my first suggestion is to have a project.

These days it’s not easy to emigrate without knowing what to do in your new country. Searching for a job once you have arrived can be very challenging, you may have to accept the first job that you can find – despite your studies and skills – because you’ll need to pay your rent and bills.

My second general recommendation is: learn the language. You can find many native speaking tutors of any language and attend lessons through Skype, for example.

I also suggest reading some books and watching tv series in the language that you want to learn (this is also a very good way to experience the culture of the country in which you are going to live).

About moving to Oxford… Oxford is an evolving city. There are many work opportunities in different fields these days. I suggest checking the jobs websites every day and applying online.

I didn’t encounter any particular bureaucratic difficulty while applying for our NIN (National Insurance Number) or opening a bank account online.

Finding a place to live in Oxford was very simple: we first chose an apartment on Airbnb as a short term rental. Because we liked the flat we asked the owner to rent it long term, and luckily he was ok with that.

But there are also many agencies and websites that can help you find accommodation in Oxford. Do be prepared to pay rather high fees if you choose to use an agency.

Oxford is a very friendly city, not as chaotic as big metropolises such as London, Paris or New York.

You’ll surely get used to life here, meet new friends, and hopefully enjoy expat life in Oxford as much as I do.”

Any Resources You Found Useful During the Process of Moving to and/or Building a New Life in Oxford?

Both of these websites suggest interesting places in Oxford – restaurants, gift shops and things to do – for locals and visitors.

The second one also has a section called “Events” where you can find expositions, workshops, festivals, and meetups which are a great way to meet locals or other expats living in Oxford.”

Is There Something You Just Have to See or Do When You Are in Oxford?

“Definitely visit the Radcliffe Camera. This is one of the University of Oxford’s buildings, built in 1737–1749 to house the Radcliffe Science Library. It’s a landmark of the city.

Climb the Carfax Tower and enjoy the view from above. And do spend a few hours in the wonderful Botanical Garden.

Lastly, and not everyone knows this, Lewis Carroll was from Oxford and many places in the city inspired his “Alice in Wonderland”. Have fun exploring Oxford and discovering the spots that inspired this incredible novel!”

About Anna – Expat in Oxford

Anna was born and raised in a village in Piedmont, Italy, with 7000 inhabitants.

She graduated in philosophy and attended several courses of proofreading and photo editing between Turin and Milan. Today she works as an independent art organizer and photo editor.

Anna is passionate about art, reading, pizza, traveling, and taking pictures while she is jumping!
You can follow her expat life in Oxford and her travels on her Instagram account Annesoppable. She also has a blog about her job: annamola.wordpress.com 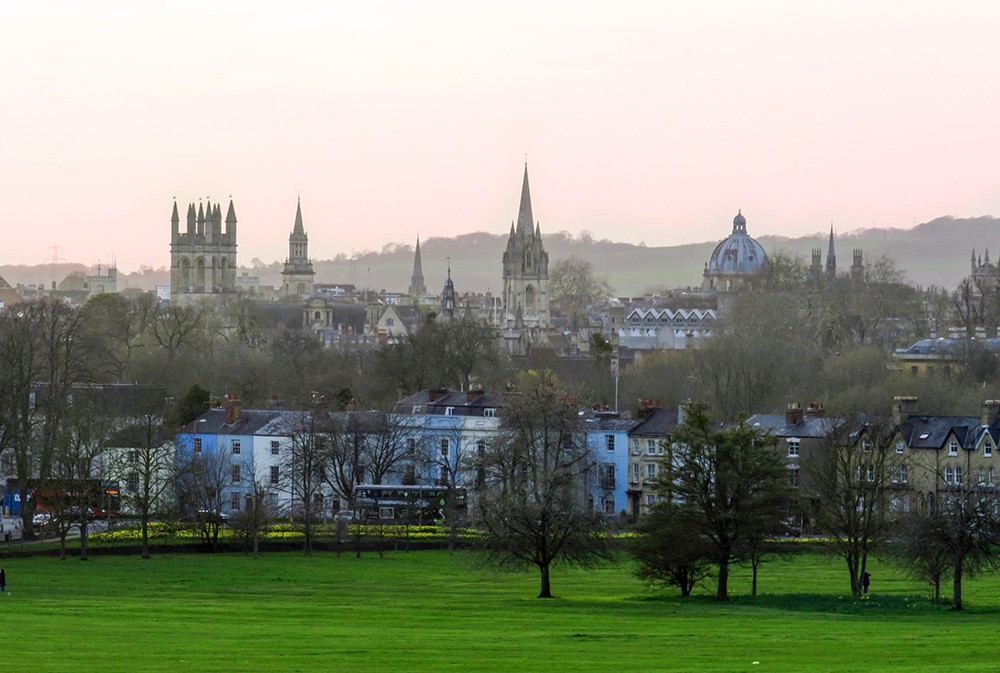 Oxford is a university city in south-central England, 51 miles (82 km) from London.

With a population of approximately 155,000, it remains the most ethnically diverse area in Oxfordshire county with one of the fastest-growing populations in the UK.

The city is known worldwide as the home of the University of Oxford, the oldest university in the English-speaking world, dating back to the 12th century.

The University of Oxford differs from many other universities in that there is no campus as such, and no central university building. Instead, the University consists of approximately 40 colleges and associated buildings. Each college has its own individual character.

Buildings in Oxford demonstrate notable examples of every English architectural period since the late Saxon period.

Oxford is more than just a university city though. Its industries include motor manufacturing, publishing, and a large number of IT- and science-based businesses, some being academic offshoots.

Like this article about expat life in Oxford? Pin it! 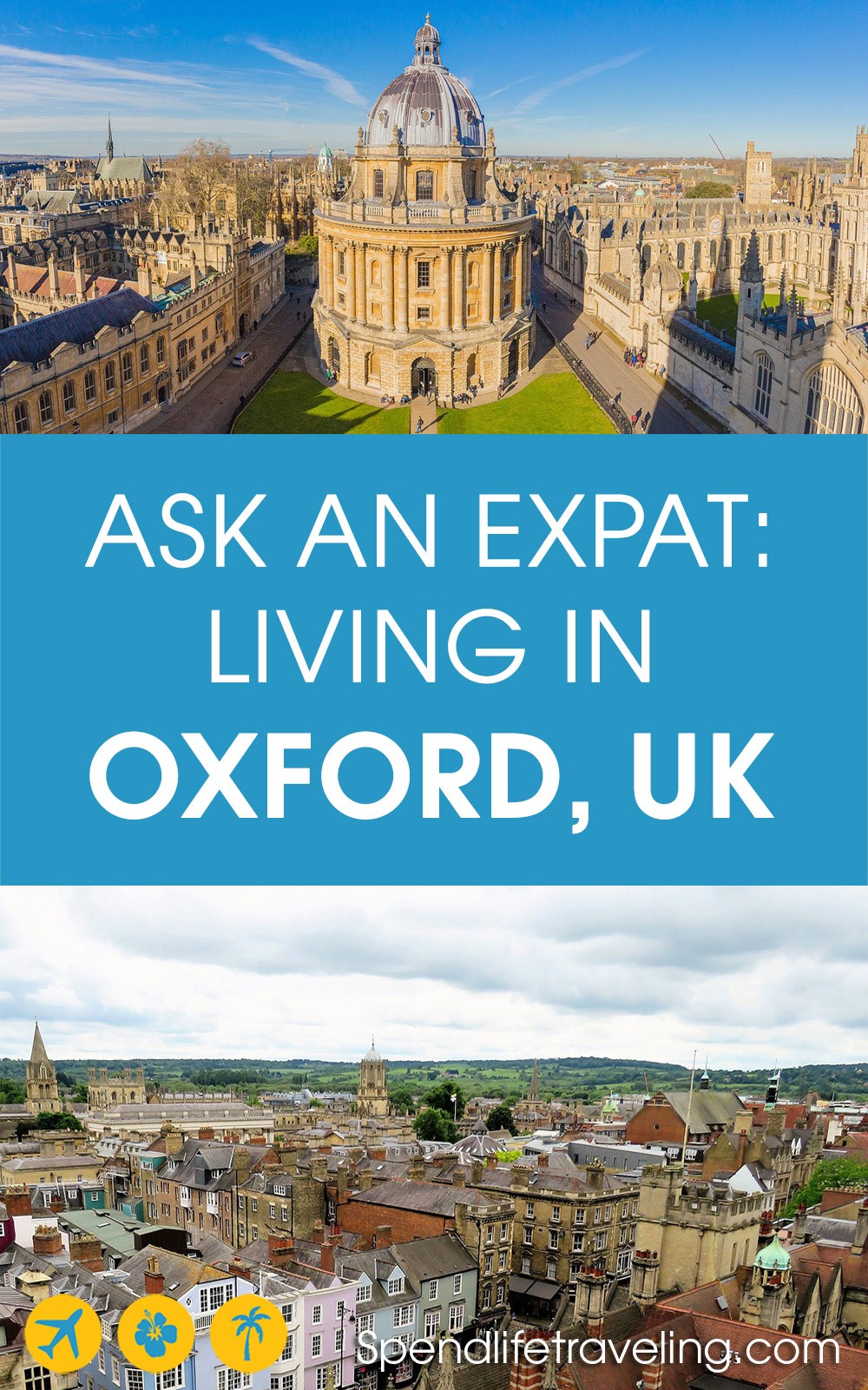 3 thoughts on “Ask an Expat: Living in Oxford, England”