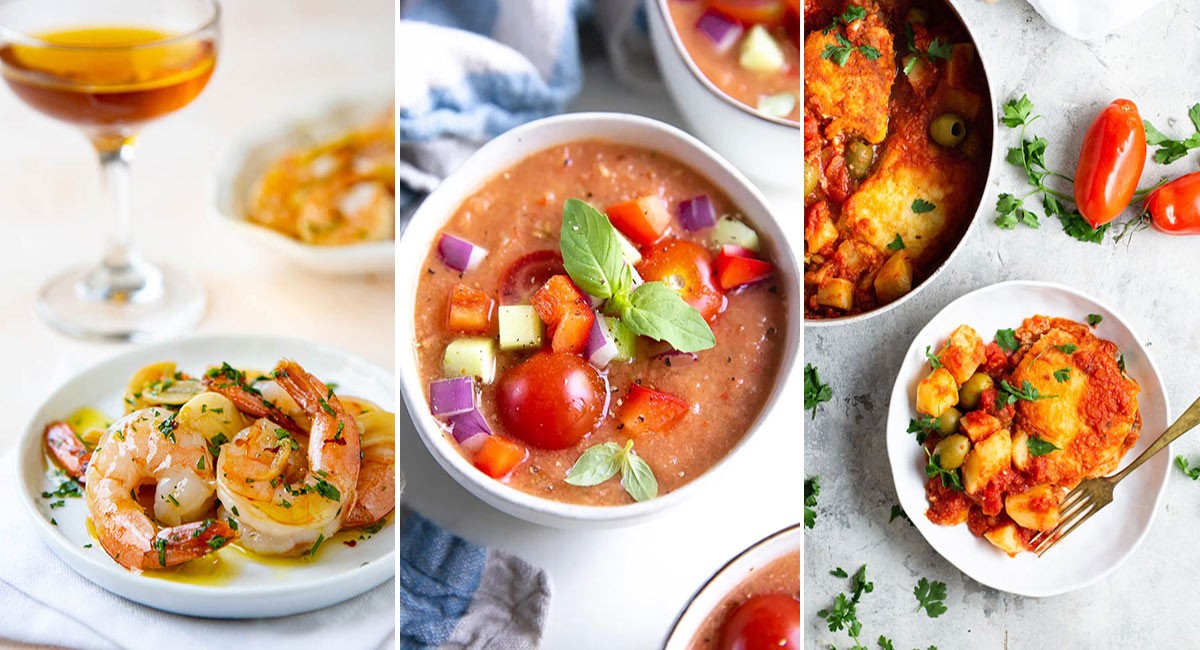 Spanish food is well known for its simplicity.

Most dishes only consist of a small number of ingredients, always of the best quality, to create delicious meals.

Now that I live in Spain I go out to eat the most popular Spanish food, but it’s great to cook some of these Spanish recipes at home as well.

Therefore I’ve created this list of easy to make Spanish food, ranging from tapas to hearty stews and delicious desserts.

Paella is one of the most famous Spanish dishes.

There are many versions of paella these days, but the most traditional one is the Paella Valenciana.

Valencia is the birthplace of paella, and the Valencians take great pride in that. Consequently, they are very strict about what can and cannot go into a ”real” Valencian Paella!

I actually took a cooking class in Valencia to learn this traditional Spanish recipe. 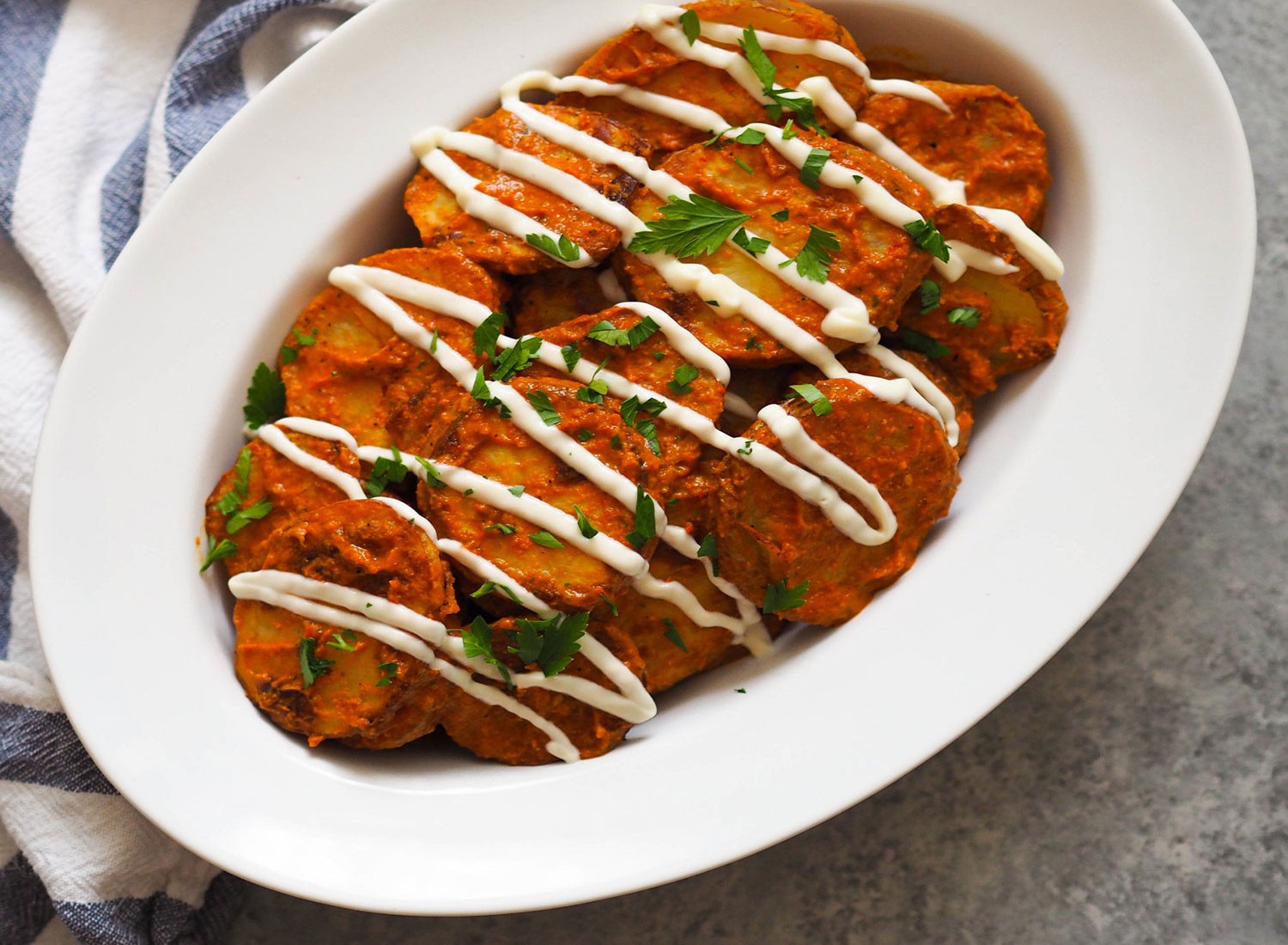 This is one of the most popular tapas, and very easy to make.

It’s hard to find a tapas bar in Spain that does not offer patatas bravas. But, quite often I’ve actually been disappointed by the patatas bravas I was served. Recently, in the south of Spain, they served us a plate of french fries with romesco sauce!

So, lately I prefer to cook this myself instead of ordering it in tapas bars!

And what’s not to love about a good serving of patatas bravas? Roasted potatoes in a spicy and smoky romesco sauce drizzled with a garlicky alioli. Delicious and perfect to combine with some of the other tapas recipes you find in this article. 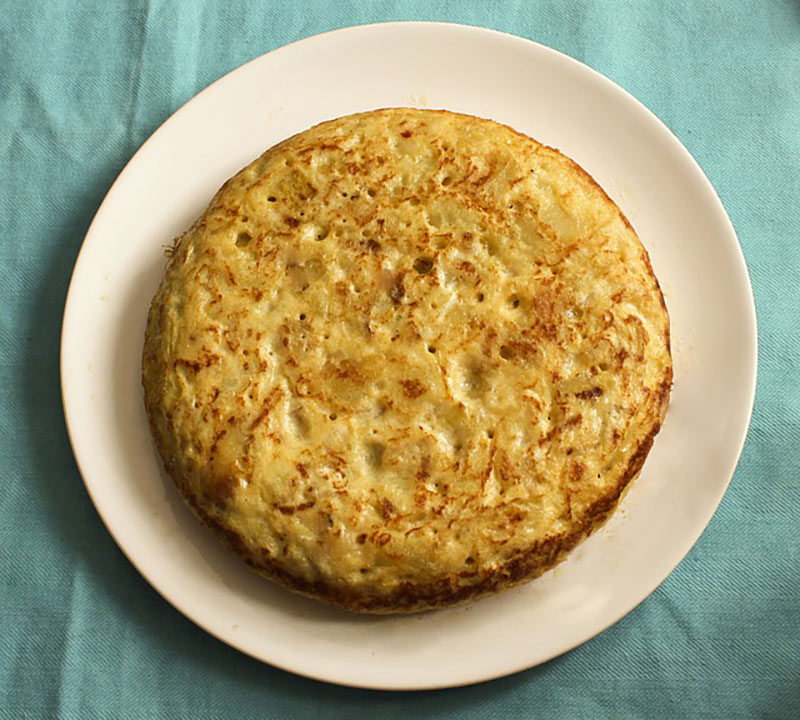 Now, I have to admit, although this is a very traditional Spanish recipe, initially I thought it was quite boring.

But, it’s grown on me and that simplicity is now one of the things I love about Spanish food. It’s all about good quality ingredients, traditional recipes, and sharing that with friends and family.

I sometimes add some spinach or pepper to the recipe or, when I still ate meat, some Spanish chorizo (check recipe number 13 for a vegan chorizo alternative).

Fun Fact: food and sticking to traditional recipes are such a big part of Spanish life that there is actually a big debate between Spanish people about whether the perfect tortilla de patatas is made with or without onion. It’s funny to listen to passionate Spanish people debate this. I’m definitely pro-onion in this case! 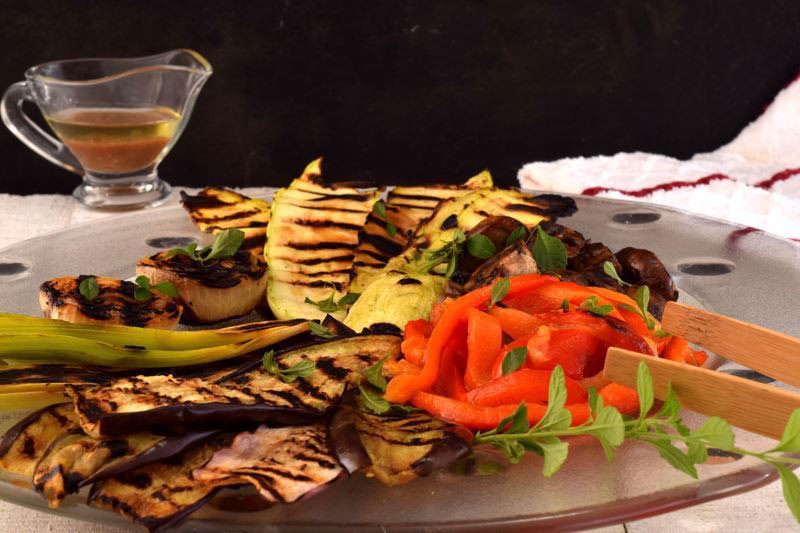 This is one of my favorite, quick and easy, healthy Spanish recipes.

Escalivada is a traditional Spanish dish consisting of an assortment of grilled vegetables. Originally it was most popular in rural areas, but nowadays you can find this dish in many parts of Spain.

This version comes with a bold and tangy balsamic drizzle. 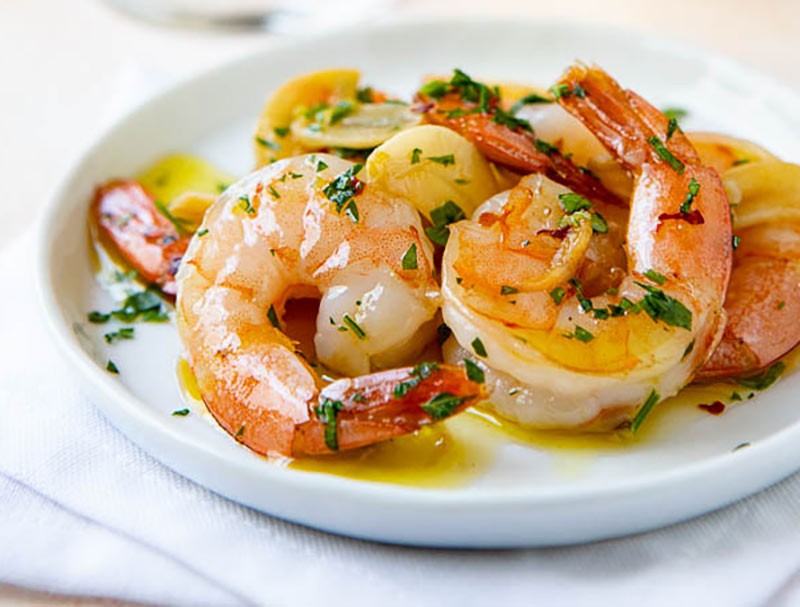 Gambas al ajillo, or shrimp in garlic sauce, is another popular tapa that’s easy to make at home.

It’s particularly popular in the south and center of Spain, although nowadays tapas bars and restaurants in most parts of the country offer it.

Gambas al ajillo pairs tender shrimp with a sauce of olive oil, garlic, sherry, and parsley – the sauce is so good you’ll want plenty of bread to soak it all up! 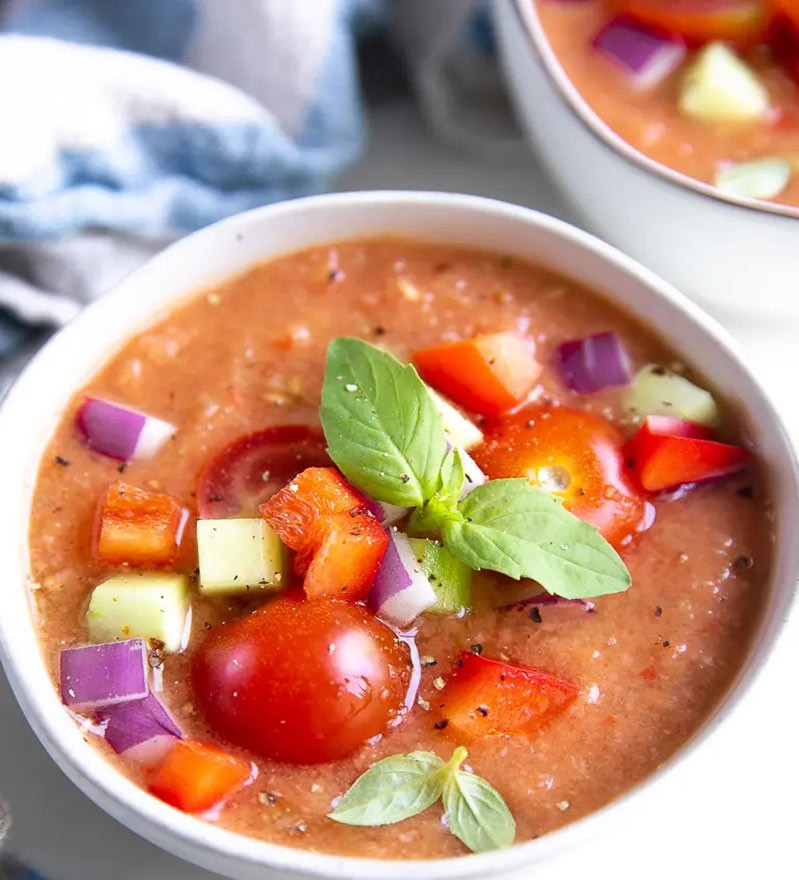 Gazpacho is another one of those traditional Spanish recipes that became world-famous.

It’s a cold, raw, blended soup that originated in the southern Spanish region of Andalucia and is now eaten throughout Spain in the warmer summer months.

The ultimate summer refresher, this deliciously easy gazpacho recipe is made with garden fresh vegetables such as tomatoes, cucumber, and onion. 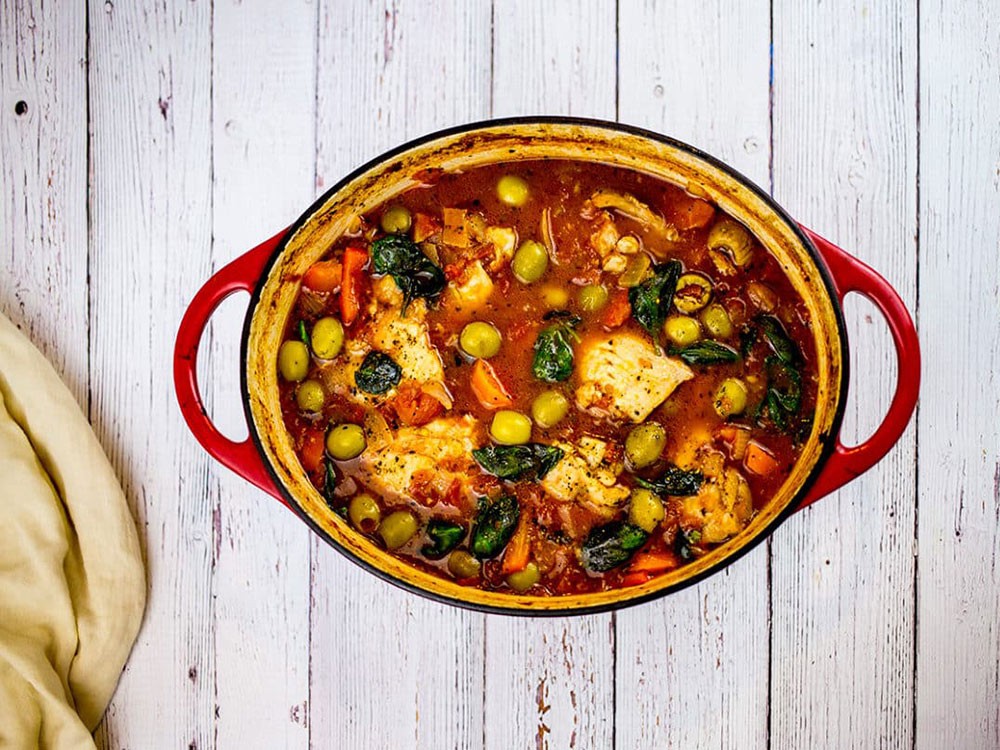 Spain’s love for comida de cuchara (dishes to be eaten with a spoon) is fierce. And as soon as the weather gets a little bit cooler you’ll see regional soups and stews appearing on restaurant menus everywhere.

This Spanish chicken stew is full of delicious Mediterranean flavors. It is a rustic style dish that makes for perfect comfort food. 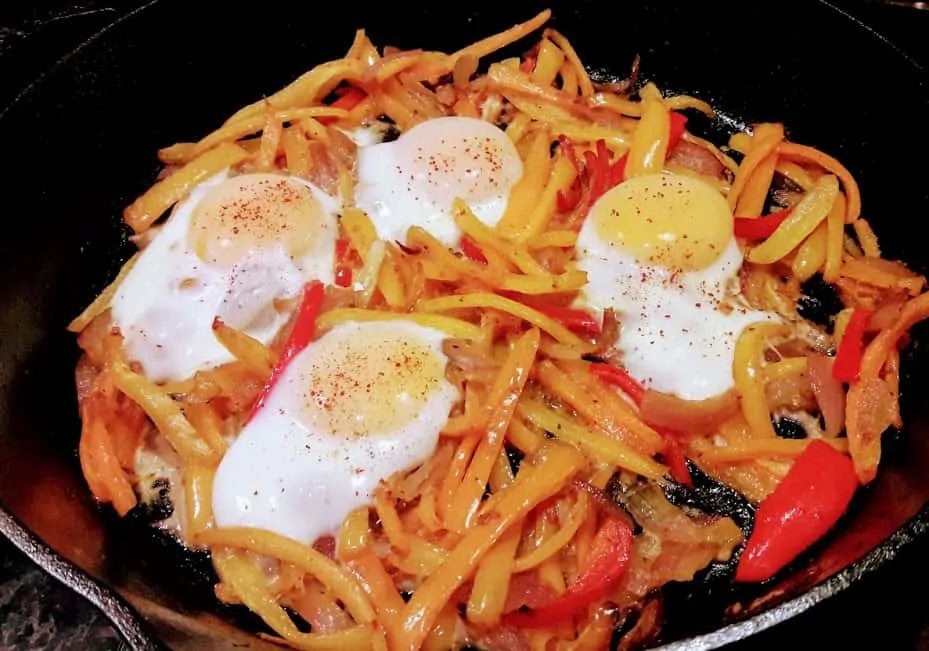 Huevos a la Flamenca, or Flamenco Eggs, is an easy dinner recipe, that is simply irresistible and delightful to make. 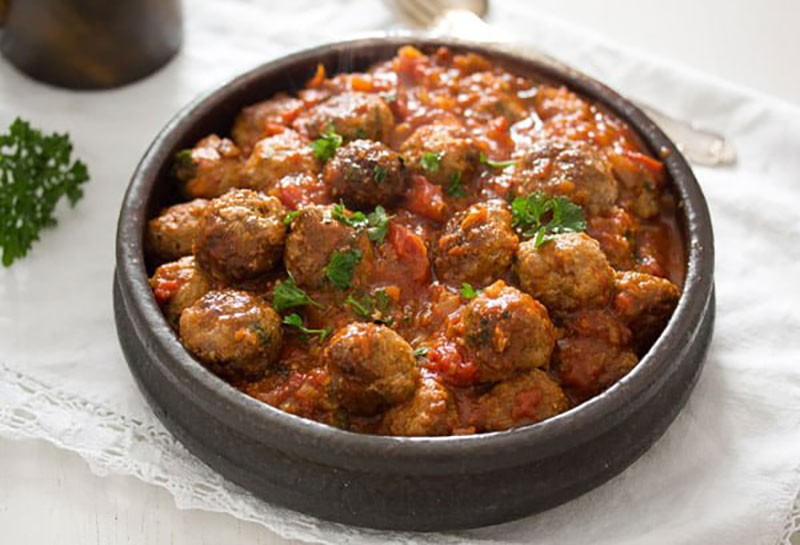 Albondigas are meatballs in a delicious tomato sauce, and they are one of the tapas you’ll find on every tapas menu in Spain.

They have been part of Spanish cuisine for centuries. Spanish history traces them back to the Islamic influence resulting from the Arab invasion in 711 AD, which lasted until 1492.

Some food historians, however, believe that albondigas are of Medieval European or even Ancient Roman descent. 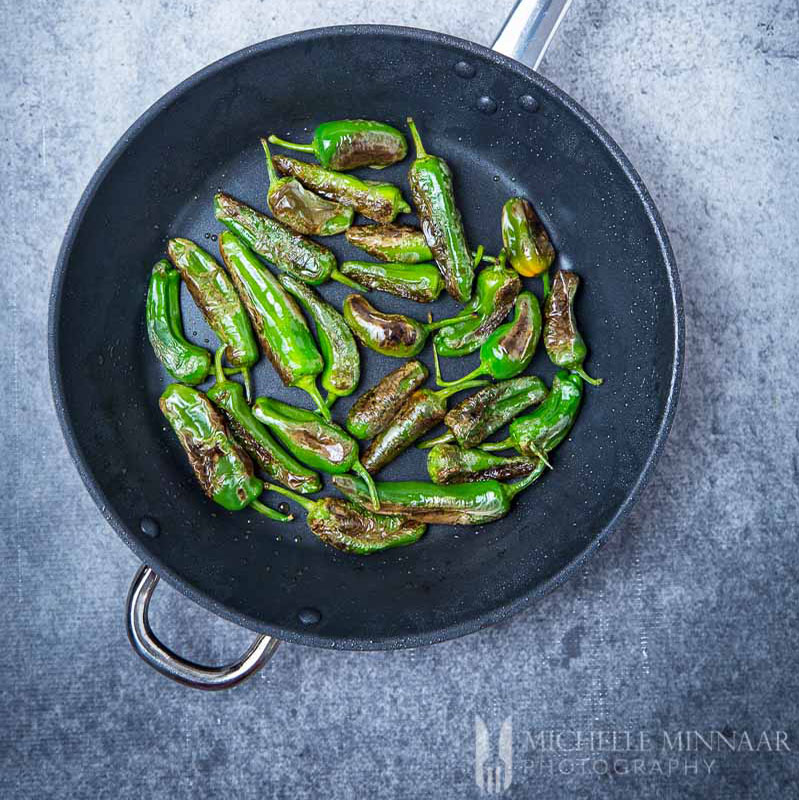 Pimientos de Padron I’ve always loved as a nice addition to an order of generally overwhelmingly meat and fish based tapas.

This tapa comes from La Coruña, in the north-west of Spain, but can be found on tapas menus throughout the country these days.

It’s a very simple tapas dish where small green peppers are fried in olive oil and sprinkled with sea salt. 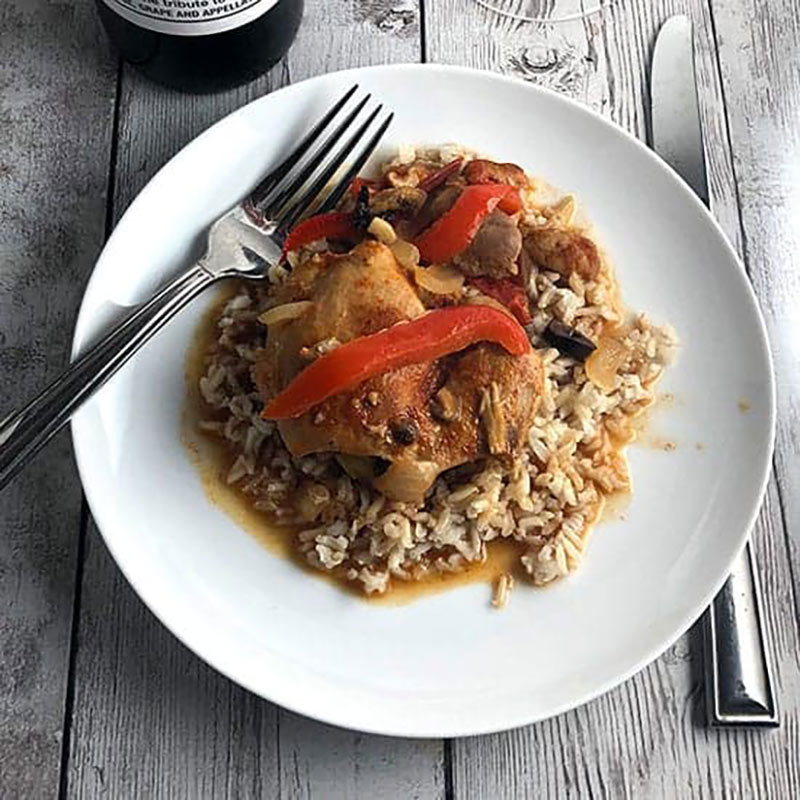 Chilindron is a typical northern Spanish stew, normally prepared with chicken or lamb. 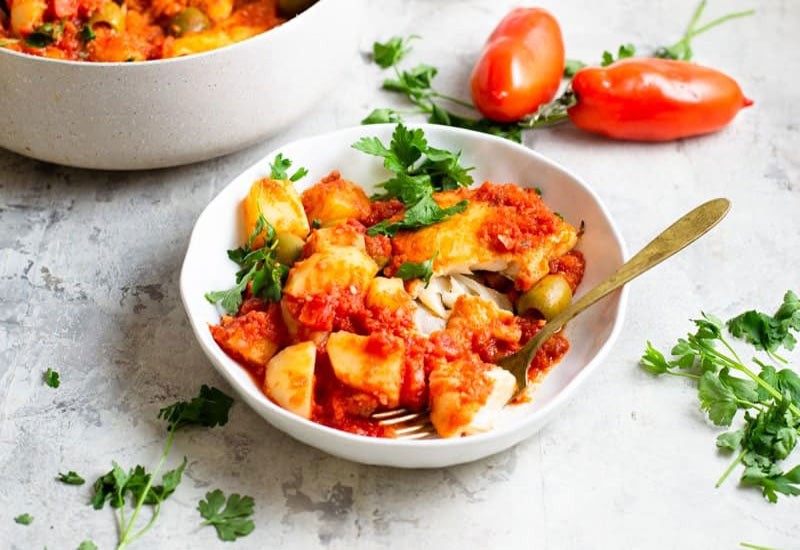 This salt cod stew is a traditional dish of the Basque Country of Spain. It features battered cod in a savory tomato sauce.

One of the best places to enjoy this traditional dish at its source is in Bilbao, the Basque Country’s biggest city.

If you ever travel here, head to Bilboa’s historic city center to sample pintxos and steaming bowls of this authentic local stew featuring the region’s signature Espelette pepper.

But for now, this recipe will help you create the perfect homemade Bacalao a la Vizcaina. 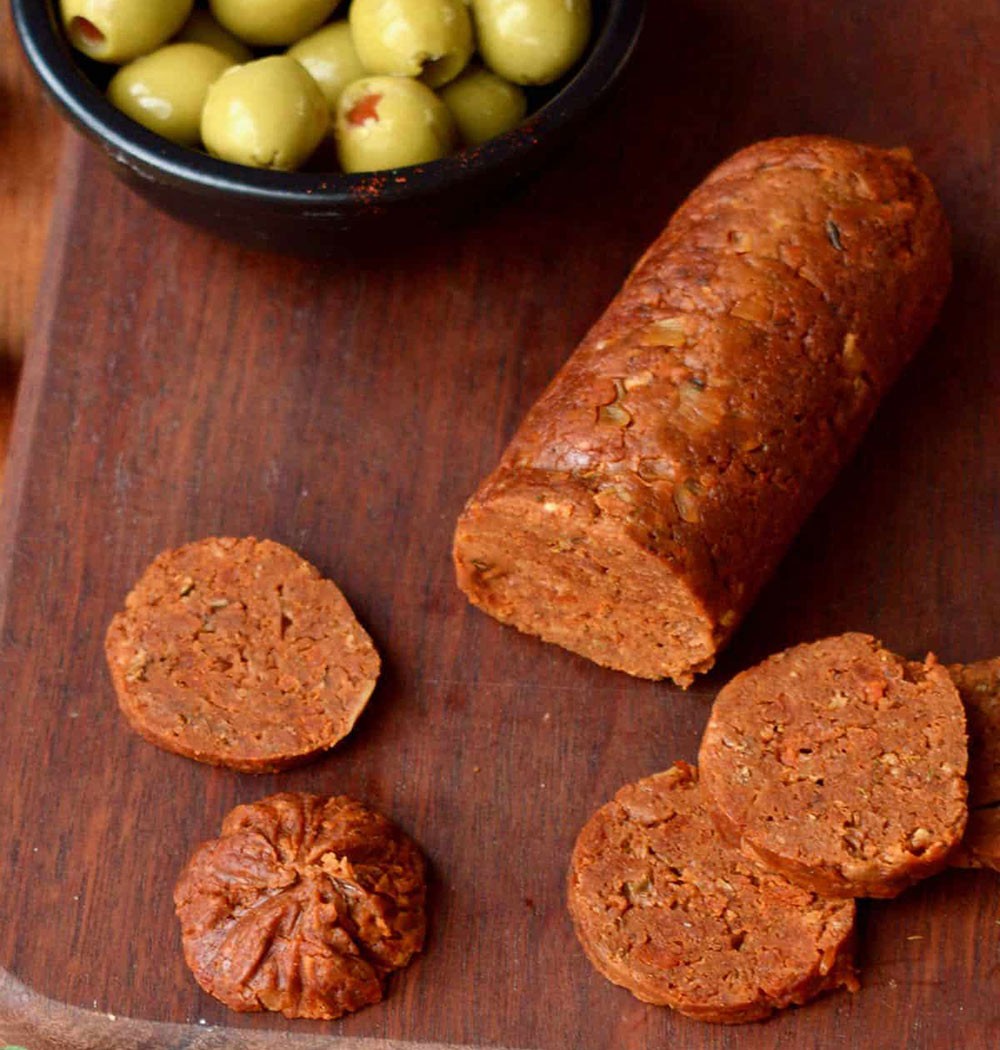 Ok, maybe this isn’t an authentic Spanish recipe, but I thought it deserved mentioning.

As I am trying to cut back on meat, fish, and dairy I’m discovering how difficult it is to find vegetarian and vegan food in Spain.

But, it’s recipes like this one that prove that you can also create vegan food with that authentic Spanish flavor.

Inspired by one of Spain’s most iconic foods, this vegan chorizo recipe will show you how to make your version of this spicy sausage at home.

Although the most famous version of these croquetas are the ones with ham, I’ve chosen this vegetarian option to again prove it’s possible to cook Spanish food without using meat or fish.

These leek croquettes are so crunchy, yet creamy inside! They make a great tapa or snack. 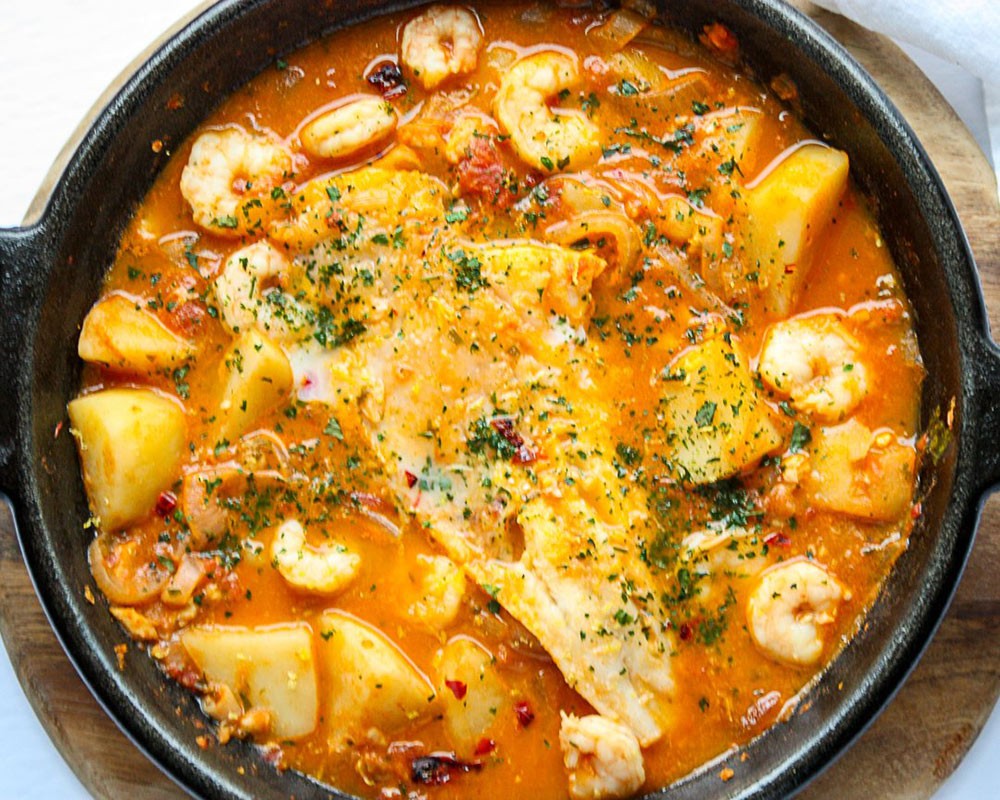 Fish stew is a classic Spanish comfort dish and there are many varieties of it.

This recipe is not only delicious and flavorful but also quick and easy to make with only one pan. 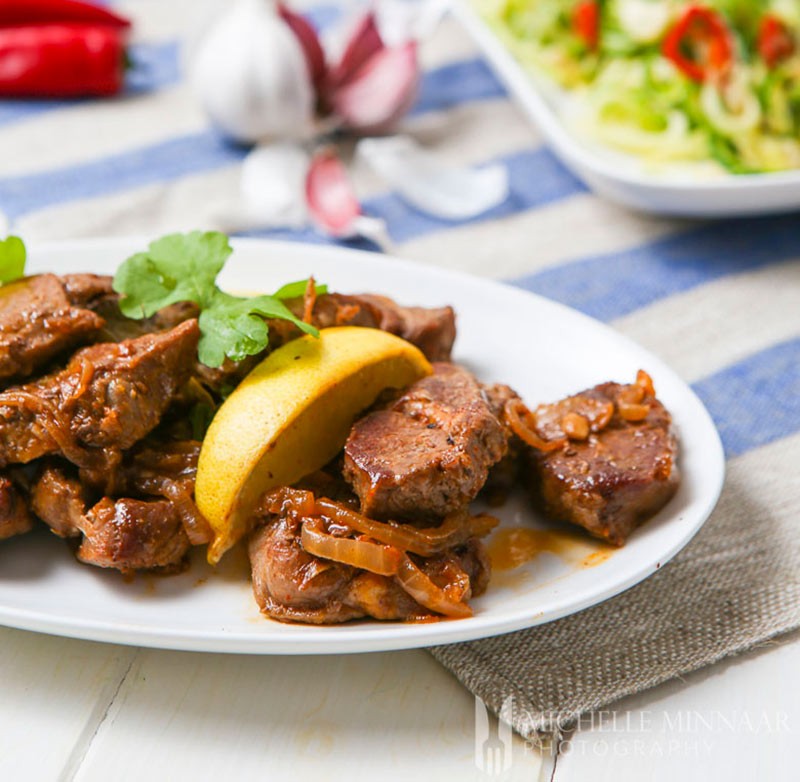 Cochifrito, sometimes spelled cuchifrito, is a traditional Spanish dish from Segovia, a city close to Madrid.

Although cochifrito is often made with pork, this cochifrito de cordero recipe, made with lamb is also a popular version and easy to prepare.

With a few ingredients, the Spanish prove that simple is best. 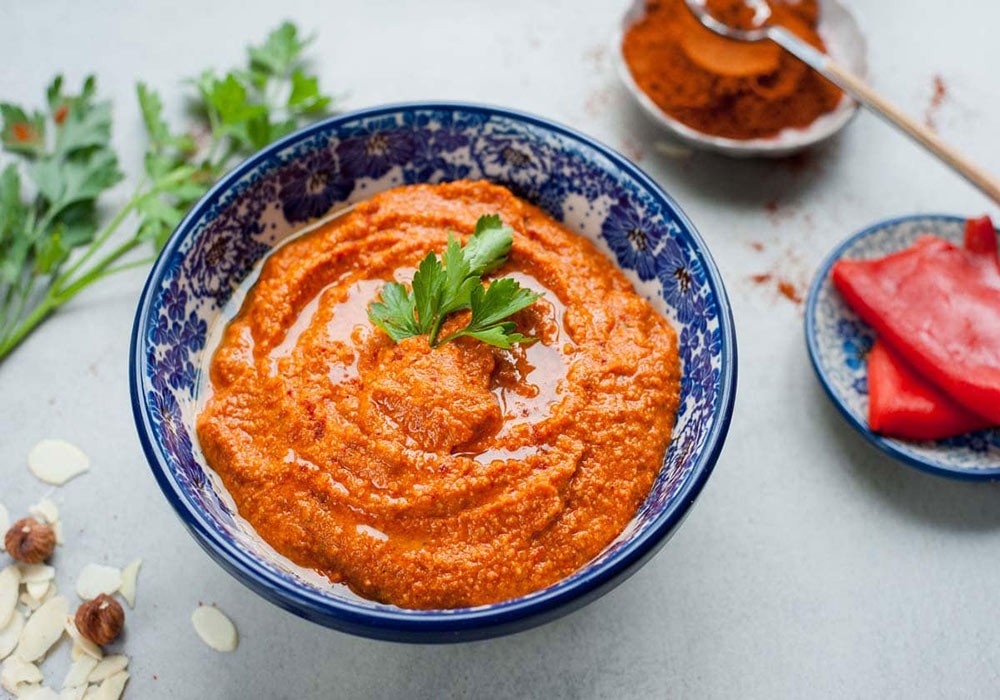 Salsa Romesco, or Romesco sauce, is a Spanish sauce made from tomatoes, peppers, nuts, vinegar, and olive oil.

The sauce originates from Tarragona, in Catalonia. The fishermen in this area made this sauce to be eaten with fish.

It’s most commonly served with fish and seafood but can also be used as a dipping sauce for vegetables or to season or thicken seafood stews. 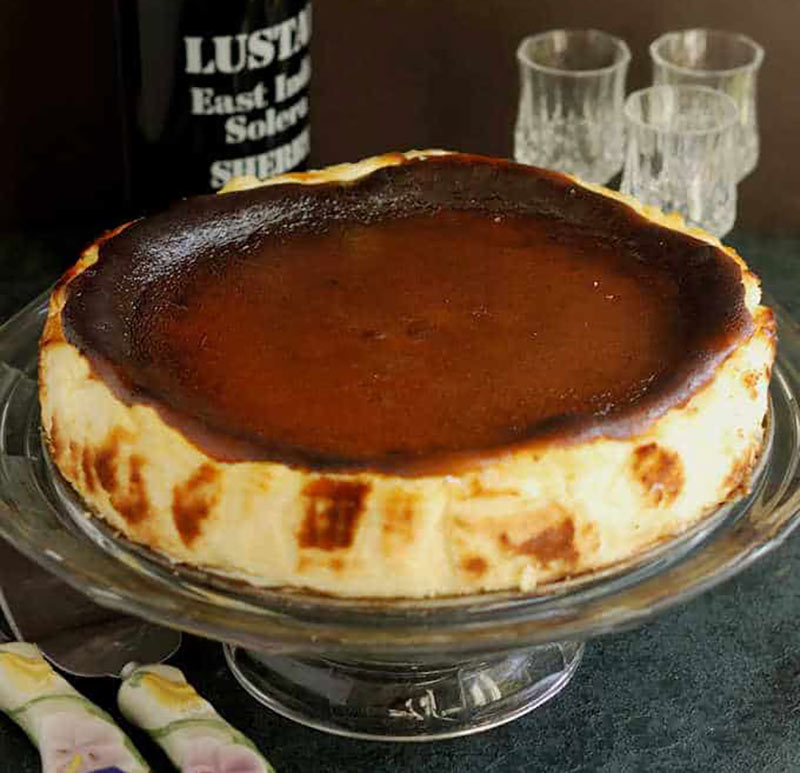 This cheesecake, which was created by a guy named Santiago in a bar in the old town of San Sebastian, is unlike any cheesecake you’ve ever tasted.

The key is the perfect baking time—or rather, underbaking. The cake has to be taken out of the oven when it’s still jiggly inside to guarantee the smooth, gooey, texture. The outside of the cake has to be burnt brown to give it extra flavor and a slightly caramelized touch.

San Sebastian Cheesecake is a unique confection that truly is super-easy to make. It is stunning to see with its mahogany brown top and oozy, custardy center. 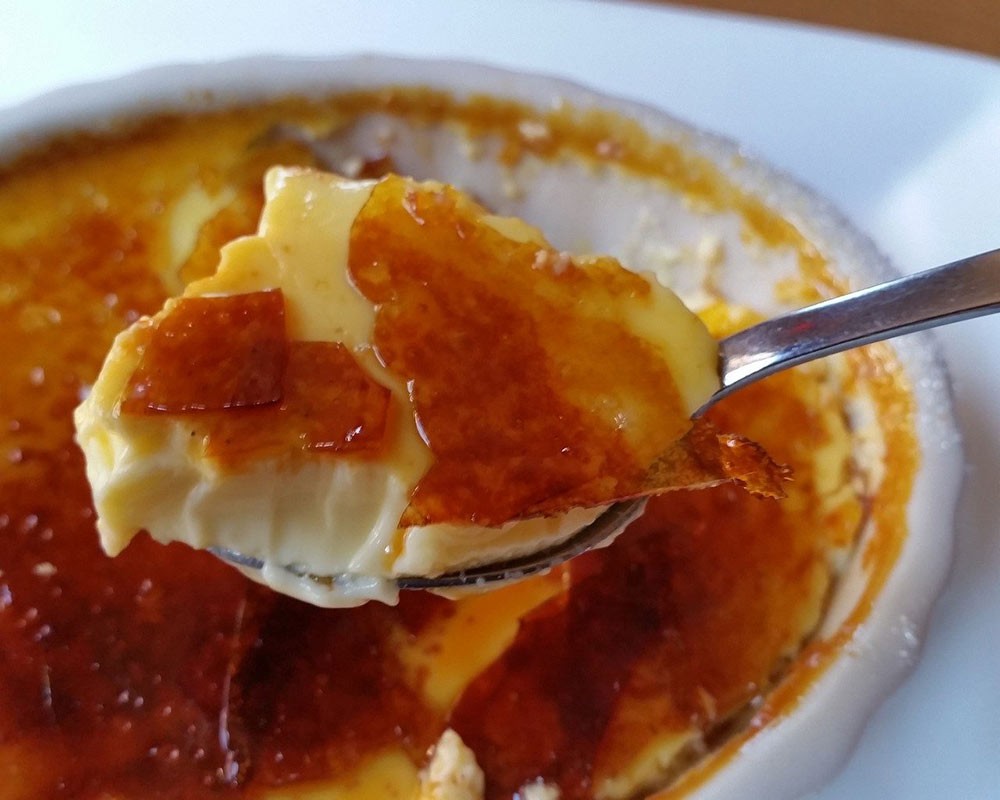 Crema Catalana is one of the most famous Spanish desserts.

This delicious custard comes from Cataluña, hence the name, but is also referred to as crema quemada.

And although similar, it’s not the same as the French crème brûlée.

Tip: This Spanish recipe for Crema Catalana is easy to make but the custard needs to be refrigerated for several hours. I’d therefore recommend making this the day before you’re serving it. 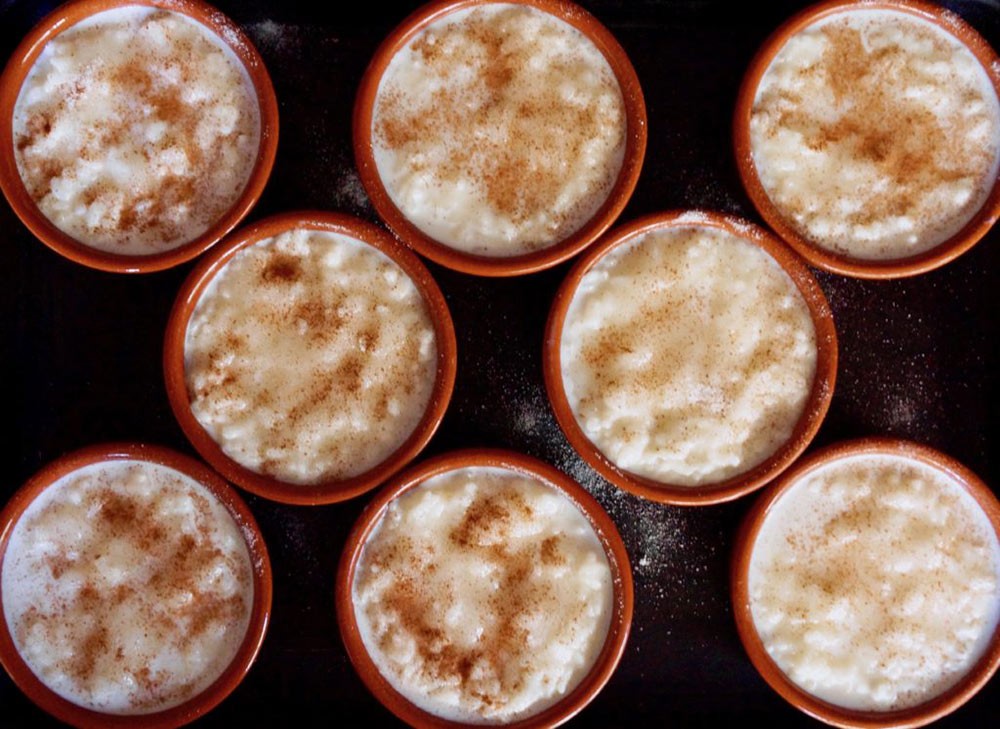 Arroz con leche is one of the oldest desserts in Spain.

It’s not originally Spanish as the Moors brought it to the country, but it quickly became popular in many parts of Spain.

This recipe for arroz con leche with anise is rich, creamy and flavorful. 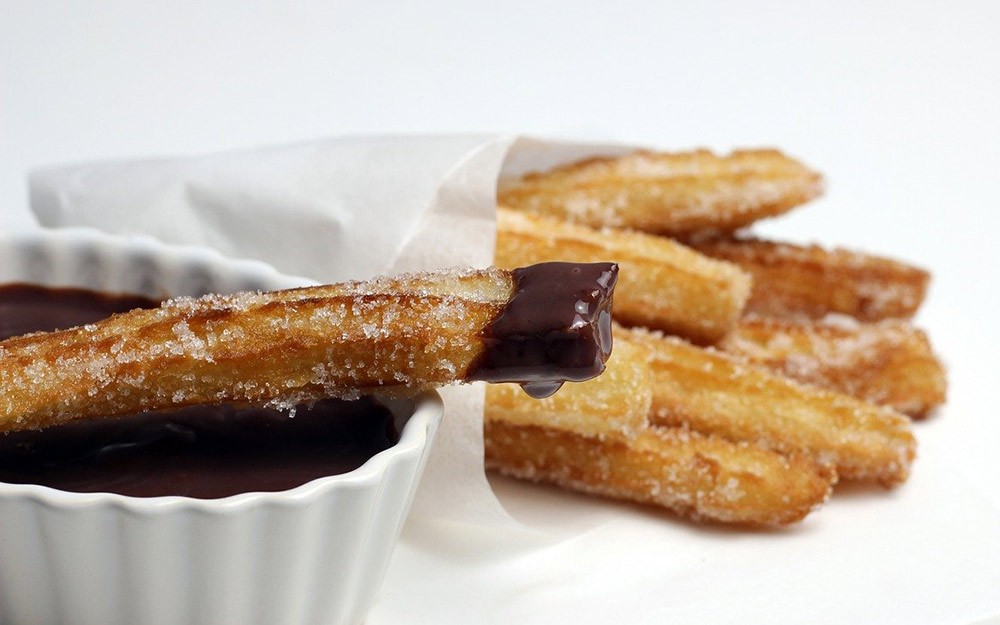 Churros are a delicious snack and probably the most popular street food in Spain.

In this article about street food recipes I have included the recipe for churros.

And, one final Spanish recipe worth sharing is the very simple, but also delicious and very popular Spanish breakfast Tostada con Tomate. I’ve written a whole article about this Spanish breakfast, which includes a recipe.

I Hope You’ve Enjoyed This List of Spanish Recipes!

And if you ever visit Spain, then check out the famous Spanish food you should try in different parts of the country.

Like this article with Spanish food recipes? Pin it! 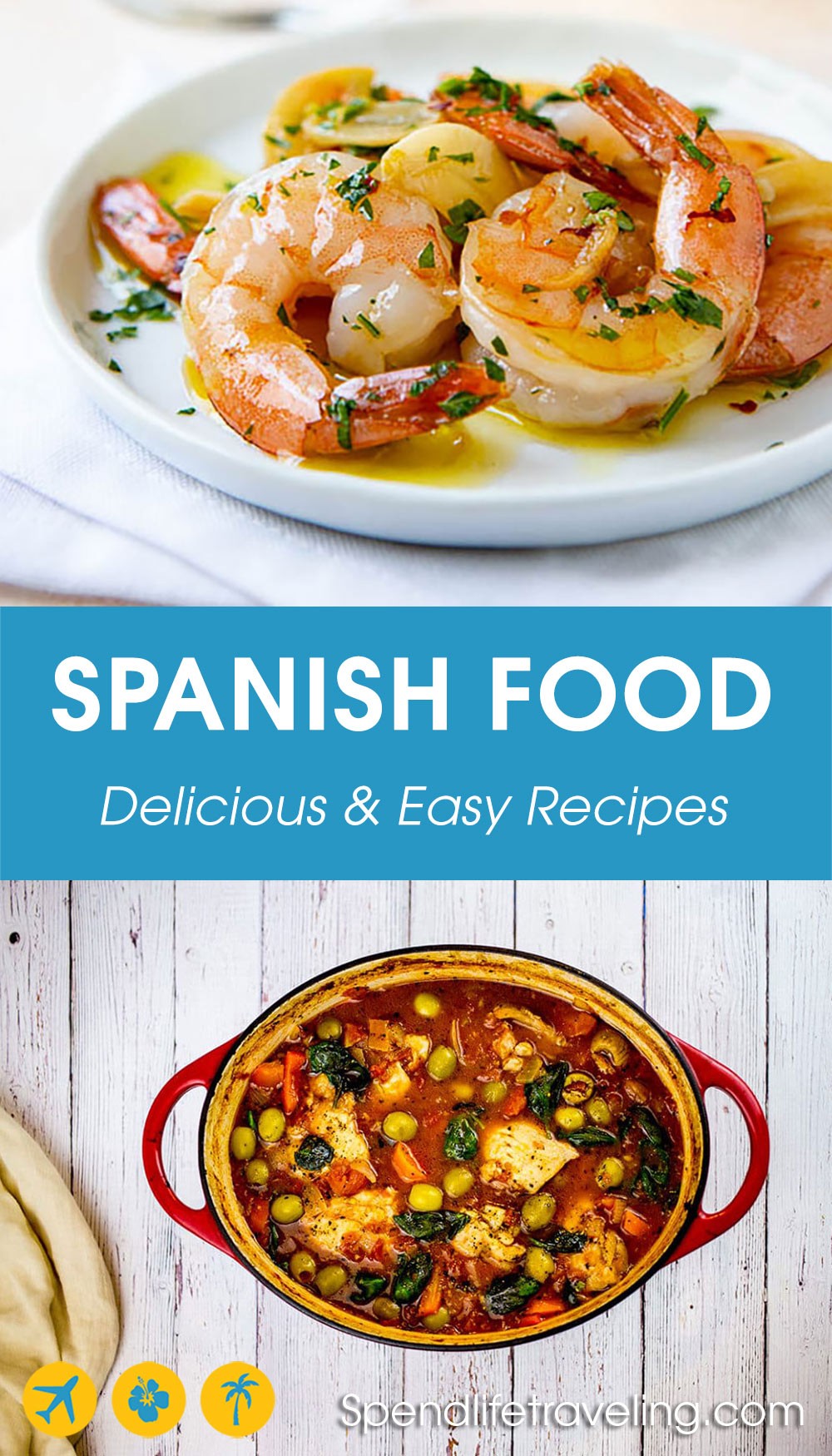 1 thought on “Spanish Food: Recipes That Are Easy to Make at Home”