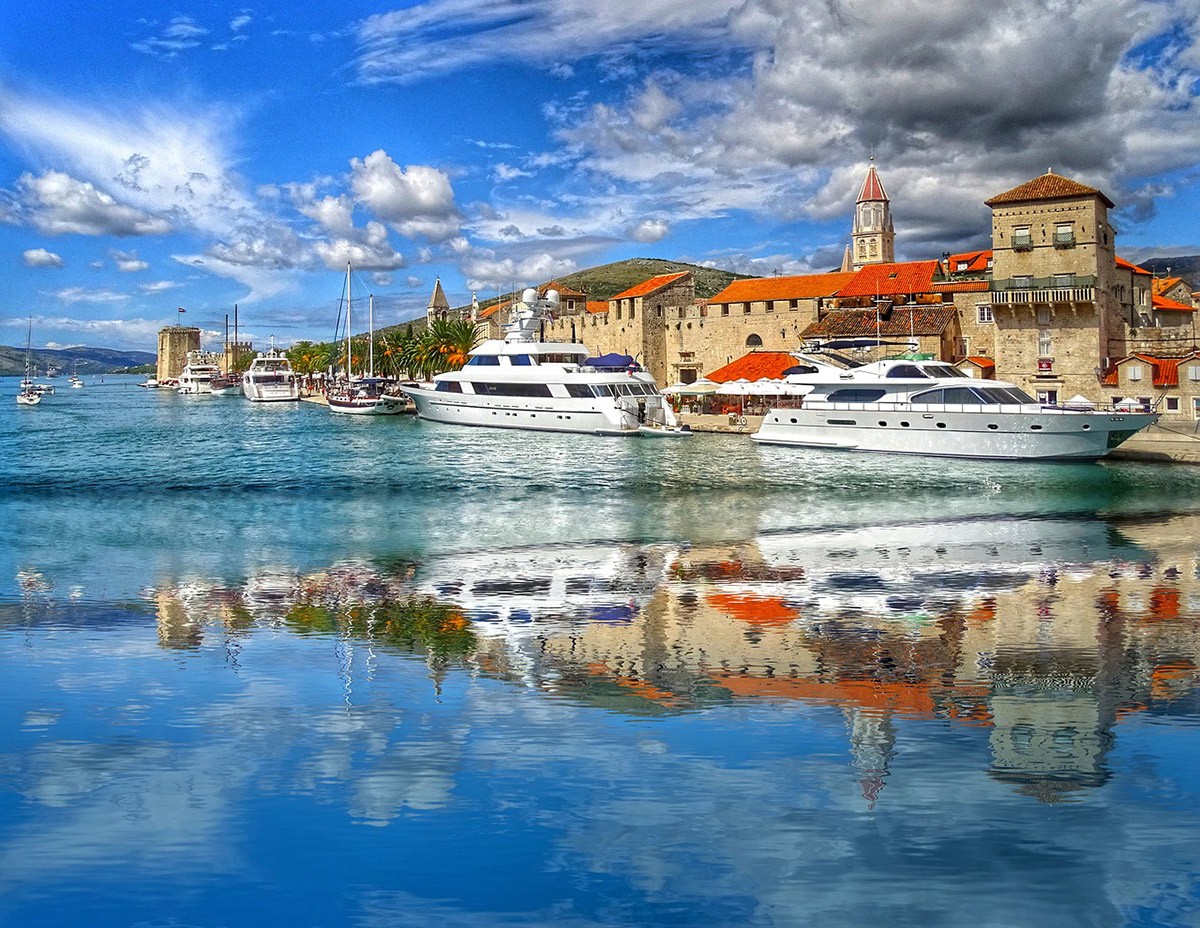 Wondering where to go in Croatia? Well, you will find all the answers you are looking for in this article!

I’ve had the opportunity to visit Croatia many different times, and it was difficult to pick only a handful of the best places to visit in Croatia. But I thought about it hard, and I can honestly tell you that the following five cities are the ones that I fell in love with the most.

From the ancient monastery gardens of Šibenik to the wonderful, picturesque views of Trogir – here are the best places to visit in Croatia!

Where to Go in Croatia

Do you know that feeling when you visit a new city and you love it so much that all you’re thinking about is I could definitely live here one day? That’s what happened to me in Šibenik.

It is so easy to fall in love with this charming city, despite the 2851 steps that you’ll eventually climb while you’re walking around the old town.

Šibenik is a city of fortresses, with a very rich history. It was first mentioned by King Petar Krešimir IV in 1066, and for a period of time, it served as the seat of the Croatian King.

If you’re ever in Šibenik, you have to visit at least one of the fortresses.

On my first visit, I headed straight to the top of the Barone fortress. It was a grueling uphill hike that included a lot of complaining. But once you reach the fortress, suddenly it is all worth it – you can have a drink at the cafe, explore the museum, go for an AR tour of the grounds and enjoy the breathtaking views of the Adriatic Sea and the city below.

Another spot in the city you can’t miss is the Cathedral of St. James. The massive 15th-century church is in the heart of the old town, and it’s actually a UNESCO World Heritage site.

I would also recommend visiting the Medieval Mediteranean Garden – it is a small garden with some unique plants and trees, but it looks absolutely stunning. There’s also a cafe here, where you can sit down for a drink and enjoy the views.

If you are wondering where to go in Croatia, make sure you add Zadar to the top of your list!

Zadar is one of the largest cities in Croatia, and it’s often called the most beautiful city on the Adriatic coast.

And I have to agree with that; everything about this city is breathtaking, from the cobblestone alleys of the old town to the views from the massive footbridge that connects the peninsula with the rest of the city.

If you really want to experience this city, I recommend starting at the Land Gate and exploring every inch of the city’s old town.

The must-see spots in Zadar include Nikola Bašić’s two famous monuments – Monument to the Sun and the Sea Organ. The former is less interesting out of the two – it’s a massive LED light installation that represents an attempt to communicate with nature via light. The latter, on the other hand, is my favorite tourist spot in the city. 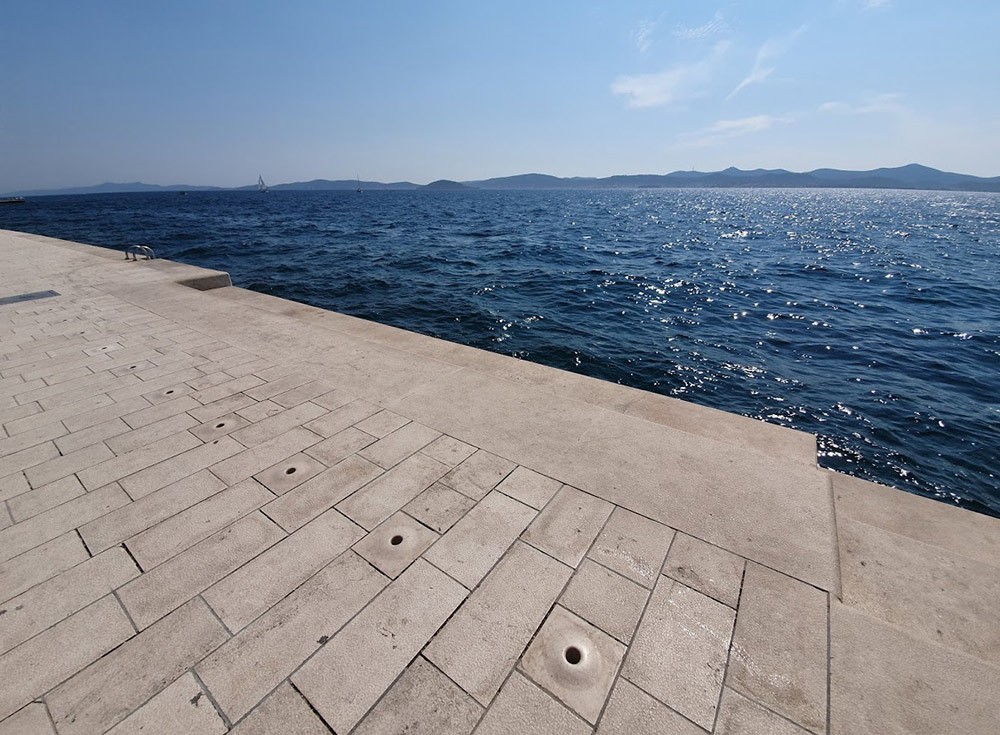 The Sea Organ is an installation of tubes hidden under steps that descend into the sea. The wind and the waves create music, which is how this monument attempts to communicate with nature via sound. It’s an amazing experience! You can hear the music when you start to approach the Sea Organ, and it is honestly one of the most beautiful sounds I’ve heard in my life.

Of course, there’s also the Church of St. Donatus – a massive church near the seaside promenade that just dominates everything in the area.

The town of Korčula, located on the island with the same name, is often said to be one of the best places in Croatia. It’s also one of the most famous Croatian cities to visit. This means huge crowds of people if you’re going here during peak season.

To be perfectly honest with you, the town of Korčula is not my favorite spot on the island. I prefer the smaller and more secluded towns, where you can truly relax and unwind.

But the beauty and charm of Korčula city are undeniable – from the massive Town Gate that welcomes you when you first get there, to the stone towers along the ancient city walls.

Korčula is rumored to be the birthplace of Marco Polo, so there are many Marco Polo themed souvenirs you can get there. There’s also a museum dedicated to the famous explorer, which is actually the house he was supposedly born in centuries ago. 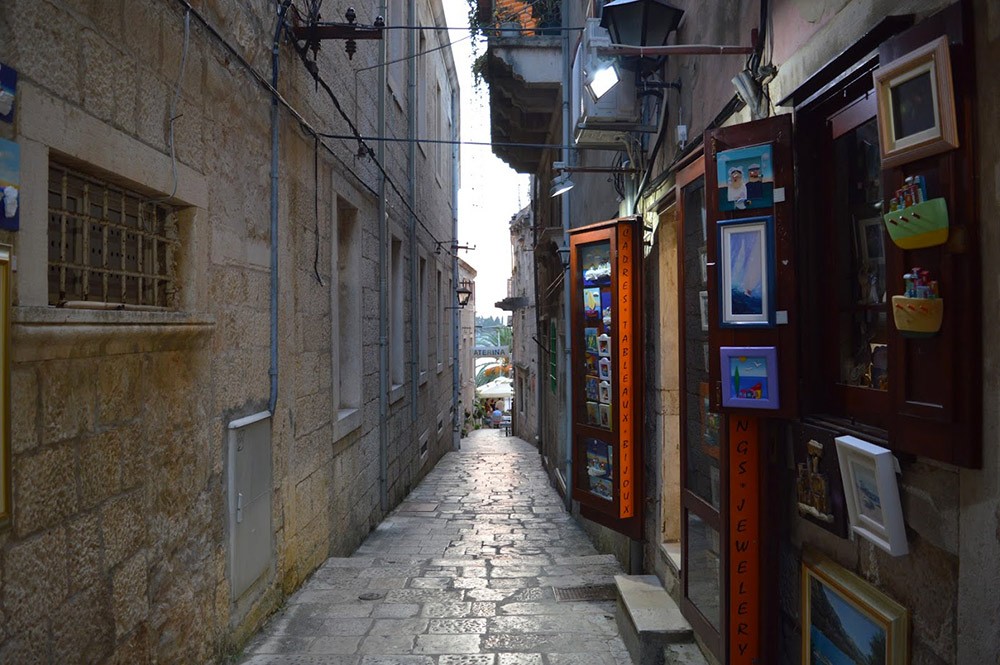 My favorite thing to do in Korčula is to walk up and down the narrow alleys and explore all the small souvenir shops. A lot of them have unique items that you won’t find anywhere else, and they’re amazing if you want to shop for presents and souvenirs.

Another thing you have to do is sit down for a drink or dinner somewhere in the old town. Pick out a restaurant or a bar that’s right next to the city walls, and enjoy the mesmerizing views of the Pelješac peninsula. Just be prepared for ridiculous drink/meal prices.

And as I said, the more secluded towns on the island are in my opinion some of the best places to visit, so if you have enough time, do venture outside of Korčula town.

The city is often overshadowed by the much larger city of Split, which is famous worldwide for Diocletian’s Palace. That’s probably one of the most famous tourist attractions in Croatia, so it’s easy to understand why people more frequently visit Split, instead of the neighboring Trogir.

And that’s exactly why you should not go with the mainstream here. Ignore the other tourists, and go visit this charming city that spreads across three bodies of land.

That’s right; a part of Trogir is in mainland Croatia, another part of the city is on the island of Čiovo, and then Trogir’s old town is just a tiny little island that’s connected to two other parts of the city with massive bridges. 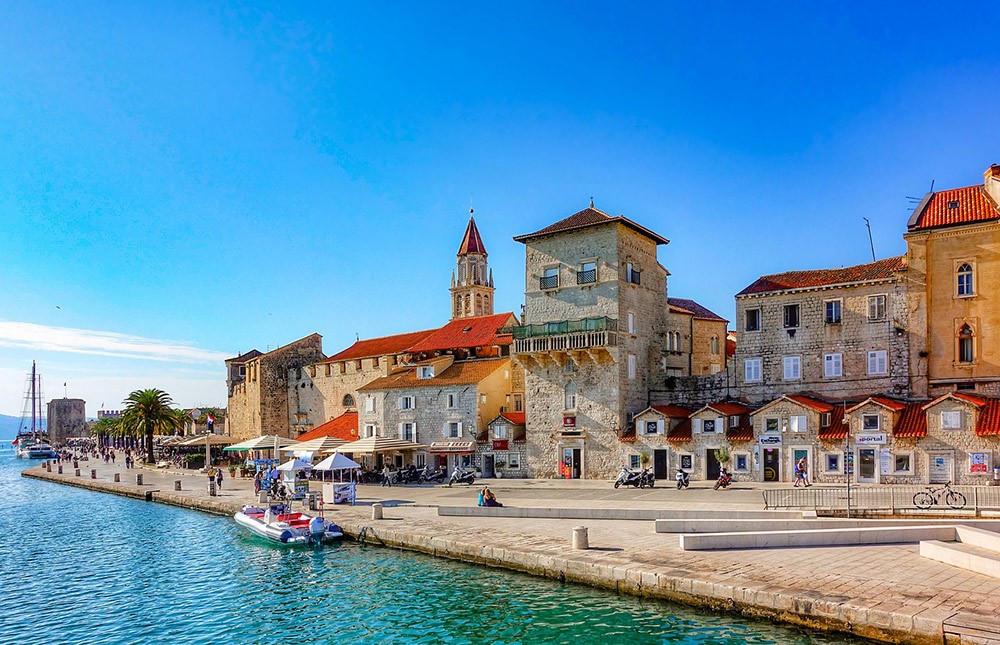 I spent most of my time in Trogir walking around the narrow alleys, admiring the views from any tall point that you could climb and just sitting in the public park and admiring the sight of the Adriatic Sea.

Probably the most famous spot in this city is the Cathedral of St. Lawrence. It lies in the middle of the city square, and it is surrounded by tall buildings, which makes it virtually impossible to get a good shot of the entire church and its bell tower.

Another must-visit place in Trogir is the Kamerlengo Tower. The 15th-century castle offers gorgeous views of the old town and the harbor, and it’s the perfect spot for a good, panoramic photo.

Croatia’s capital city is definitely one of the best places to visit in Croatia, particularly in the winter months.

Zagreb is known for having one of the most enchanting Christmas Markets in Europe, which attracts a myriad of tourists each year. Just try to find a moderately priced apartment to rent in December, and you’ll see what I’m talking about.

Zagreb is a city worth visiting any time of the year though. It’s famous worldwide for its Museum of Illusions – the original museum was opened in Zagreb in 2015. Since then, this museum became franchised, and today it exists in New York, Toronto, Shanghai, and many other cities all over the world. 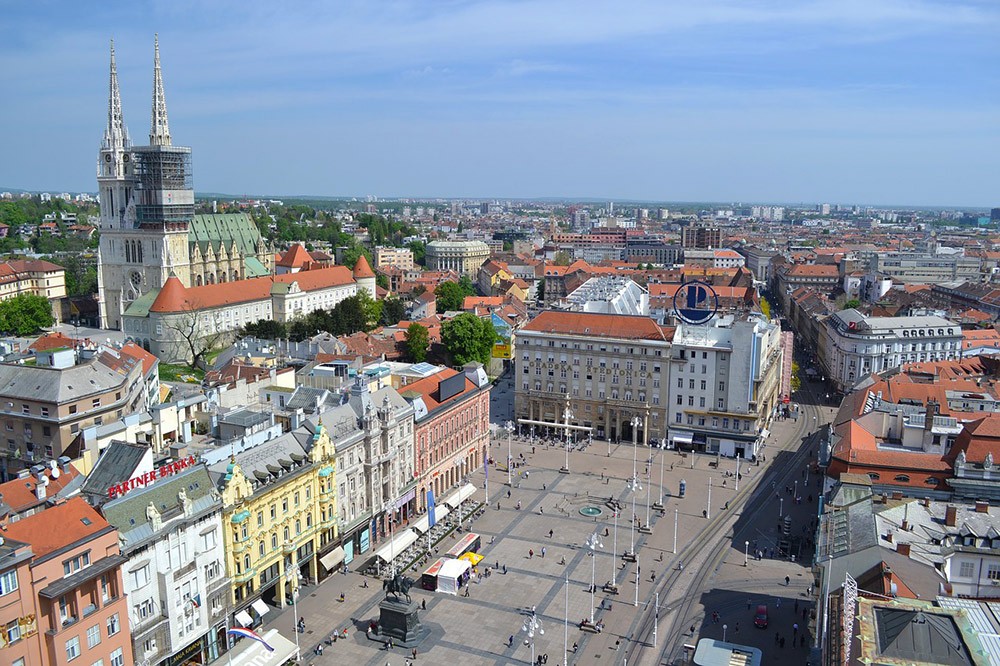 You can’t visit Zagreb and not go to Ban Jelačić Square. This is probably the most famous spot in the city, and one of the most popular tourist spots. The famous statue of Ban Josip Jelačić dominates the square and is such an iconic Zagreb sight.

There’s also Maksimir, the heavily wooded park that is home to the Zagreb City Zoo. The park is such a peaceful place, perfect for those who want to escape the city crowds and be surrounded by nature for a while.

How to Get Around Croatia

Once you have decided where to go in Croatia, the easiest way to get around Croatia is to drive.

Most of the cities are connected by highway, so this is also the fastest way to get from one place to another.

For example, if you want to travel from Zagreb to Split, you will get there in around four hours if you drive. However, if you take the bus, that journey could last anywhere from 5 hours (if you take the night bus) to nine hours during the day.

So, if you’re staying in Croatia for a while and you want to explore as many cities as possible, your best bet is to rent a car.

If you only want to visit one or two cities, other than the one you are staying in, renting a car is probably not worth it. In that case, you’re better off taking the bus. You can travel to all the bigger cities, and even the popular tourist spots like Plitvice Lakes or Krka National Park, by bus.

Additionally, if you’re staying within Zagreb, you can always use their car-sharing service, Spin City. You’ll find these cars in various parking lots throughout Zagreb, and you can unlock them with your phone. They charge you by the minute, and you have to return the car in one of the indicated Spin City zones. If you want to go to Varaždin or Sisak for a short day trip then this is probably the most convenient and efficient way to do it.

I hope this article has given you a good idea of where to go in Croatia and how to get around. Croatia is a beautiful country and I am sure you will love it as much as I do!

Like this article about where to go in Croatia? Pin it! 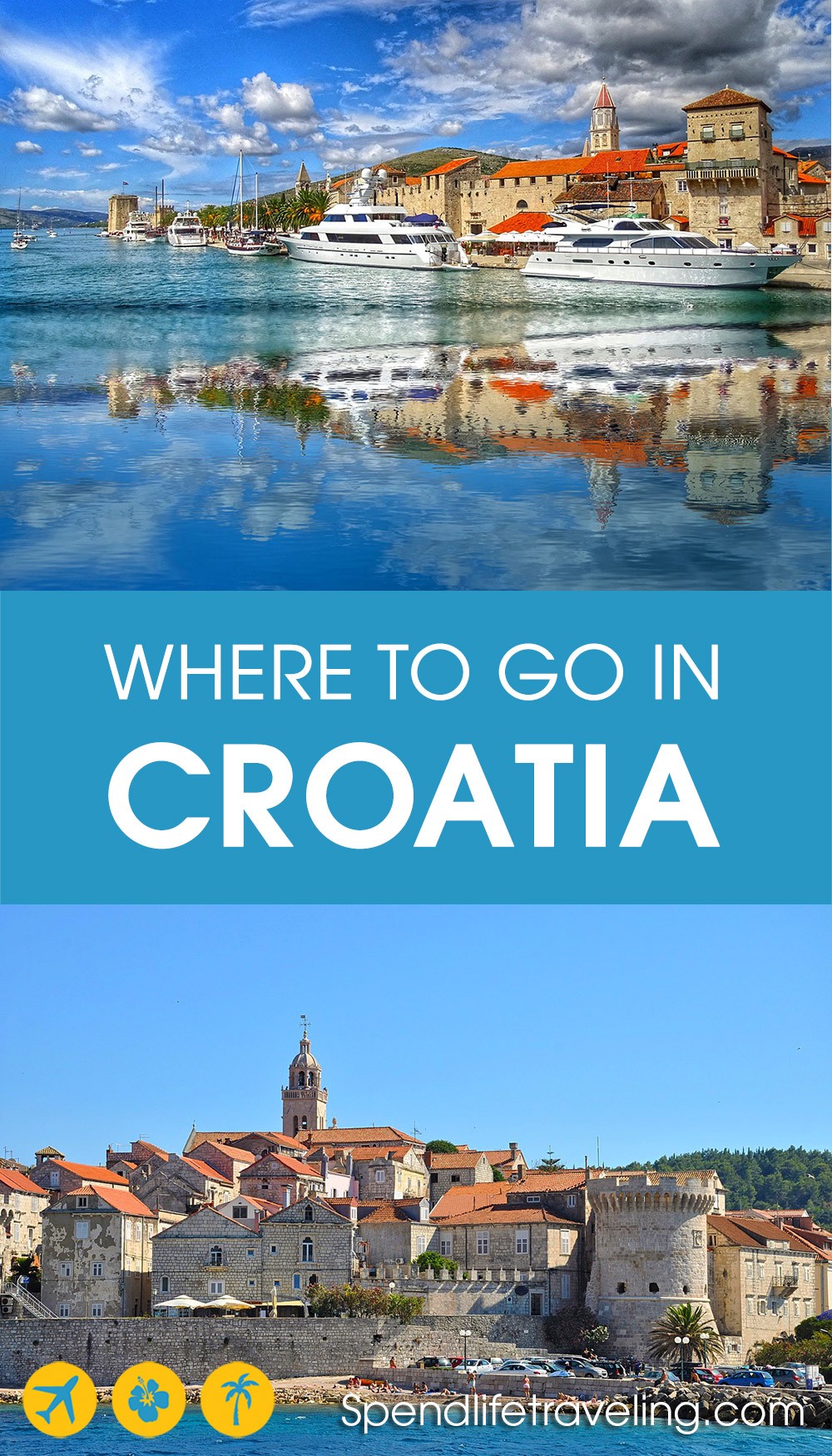