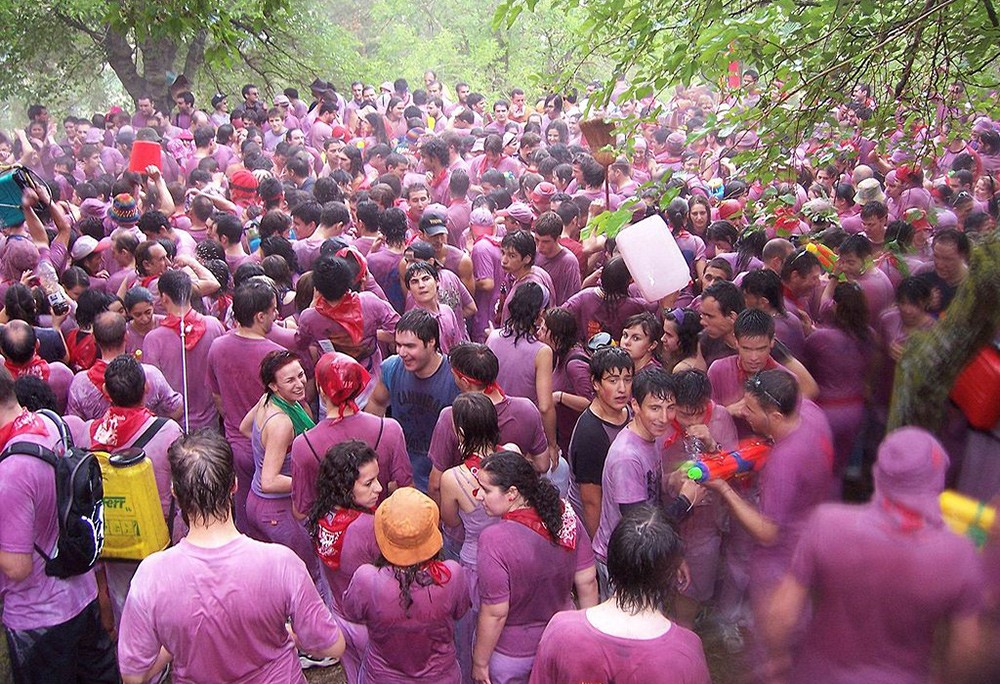 Yes, there are quite a few weird Spanish festivals to visit!

Spain has a reputation for loving to party. Partying in Spain doesn’t just mean having a few drinks and dancing to some live music, though. Instead, Spain takes throwing a party to a whole other level…

Here are five crazy festivals in Spain that you have to see to believe!

5 Crazy Spanish Festivals You Have to See to Believe!

1. La Tomatina, or the “Throwing Tomatoes at Your Friends Festival”

Where: Buñol, Valencia
When: Last Wednesday of August

Thousands of people flock to this normally sleepy town to join the world’s biggest tomato fight.

The town provides about 150,000 kilograms of overripe tomatoes for participants, and within seconds, tomato goo covers everyone and everything.

The actual food fight only lasts for an hour, from 11 a.m. to noon, but the party goes on all day!

Note: unlike most festivals in Spain La Tomatina is not a free festival. You have to buy tickets beforehand which you can do on the official website or through tour companies. 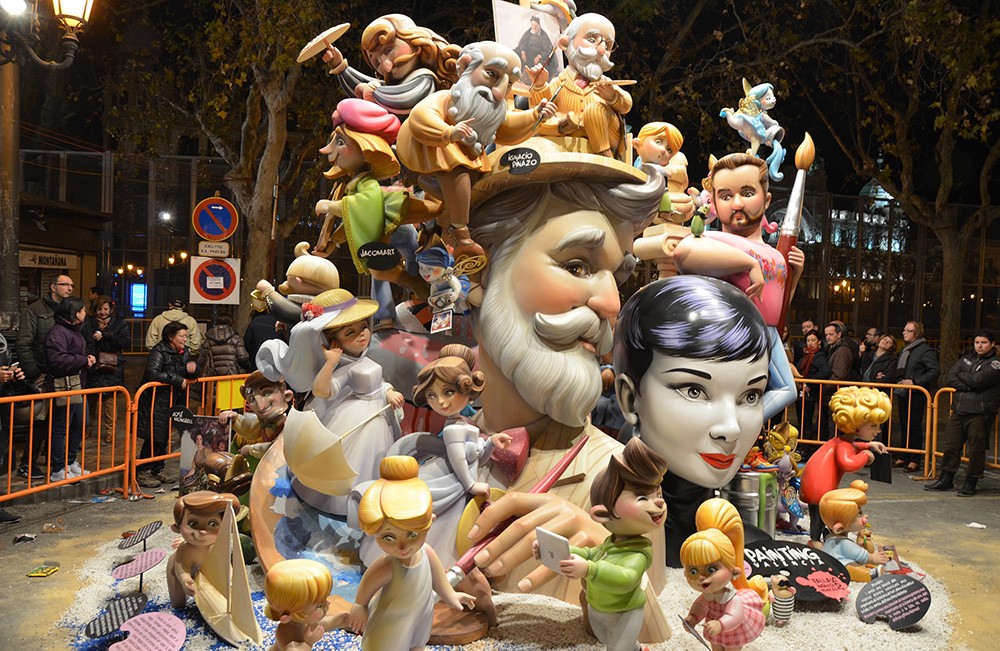 Fallas is a traditional celebration held in commemoration of Saint Joseph, the patron saint of carpenters. This once-small event has long since evolved into a large, five-day celebration attracting an incredible crowd.

The focus of this festival is the creation and eventual burning of so-called fallas. These are huge, largely papier-mâché statues, made up of several ninots, or puppets. They often depict satirical scenes and current events.

Valencian neighborhoods get together and work for nearly the entire year to create their own falla, with a total of several hundred fallas throughout the city.

Every falla contains a main ninot, known as the ninot major, and a number of smaller ninots. In the days leading up to the burning of the fallas, the ninot majors are displayed in city squares and other open spaces. The smaller ninots are added over the course of several days to create enormous fallas.

On March 19, after days of festivities throughout the city and in neighboring towns, participants burn the fallas in huge bonfires, and all the hard work goes up in smoke.

By popular vote, one of the ninots is spared every year. This is called the ninot indultat, or the pardoned mannequin, and it’s exhibited in Valencia’s Fallas Museum.

Fallas has recently been added to UNESCO‘s intangible cultural heritage of humanity list.

Read my detailed guide about Las Fallas for more information.

3. Moros y Cristianos, or the “Reenactment of How We Kicked the Moors’ Asses”

Where: In many towns & cities, with some of the larger celebrations in Alicante, Alcoy, and Villajoyosa
When: In spring & summer

This multi-day festival reenacts the historic battle between the Christians and the Moors, who ruled Spain for about 700 years.

Local citizens join groups, or filaes, representing either Moors or Christians, and spend a large part of their paychecks on elaborate costumes.

At the start of the festival, the groups act out the capture of the town by the Moors. The festival eventually ends, after days of parades, fireworks, and street parties, with the Christians winning a simulated battle and kicking out the Moors.

To kick off this wine festival, a large street party happens on the evening of June 28. However, the main event is the wine throwing on June 29, the day of the patron saint San Pedro.

The day starts early, with a large procession. Haro’s citizens, dressed in white shirts and red scarves, carry buckets, jugs, or any type of container they can find, filled with red wine.

The town’s mayor leads the procession on a horse. The procession makes its way through the town to the cliffs of Bilibio, where participants celebrate mass.

This is when the fun really starts! After the mass, people start throwing wine on each other until everyone is soaked and no shirt is still white. Eventually, everyone returns to town and continues the celebration at the Plaza de la Paz.

Although other Spanish towns also have annual wine throwing festivals, Haro’s Batalla del Vino is one of the most important in Spain. It was declared a festival of touristic and national interest in 1965.

A close friend first told me about this peculiar festival because his family apparently loves participating.

This “Near-Death Experience Festival” is a religious ritual celebrating those who narrowly escaped death in the past year. Of course, the best way to do so is to put them in a coffin and parade them around town!

Relatives of those who escaped death are expected to carry the survivors in their coffins to the small church.

After mass, the procession continues to the cemetery and then back to the church with a large statue of the Virgin Santa Marta overseeing the celebrations.

Participants often make financial donations to show gratitude for the fact that their loved ones escaped death.

It’s a strange sight, but all in all, it’s a cheerful celebration. As with most decent festivals in Spain, it’s accompanied by fireworks and the usual partying that carries on until the early hours.

Travel to Spain and Enjoy Some Weird Spanish Festivals!

If you thought these were the only crazy festivals in Spain, then you’re very wrong.

I’ve eaten more artichokes than I ever thought I could at a weekend-long artichoke festival and watched people have their pets blessed at a local Catholic festival.

I have yet to visit the baby-jumping festival or the annual human tower competition.

If you are thinking about traveling to Spain do look into what festivals are happening in the places you are visiting.

And check out my other articles about Spain for more travel inspiration!

Like this article about crazy festivals in Spain? Pin it! 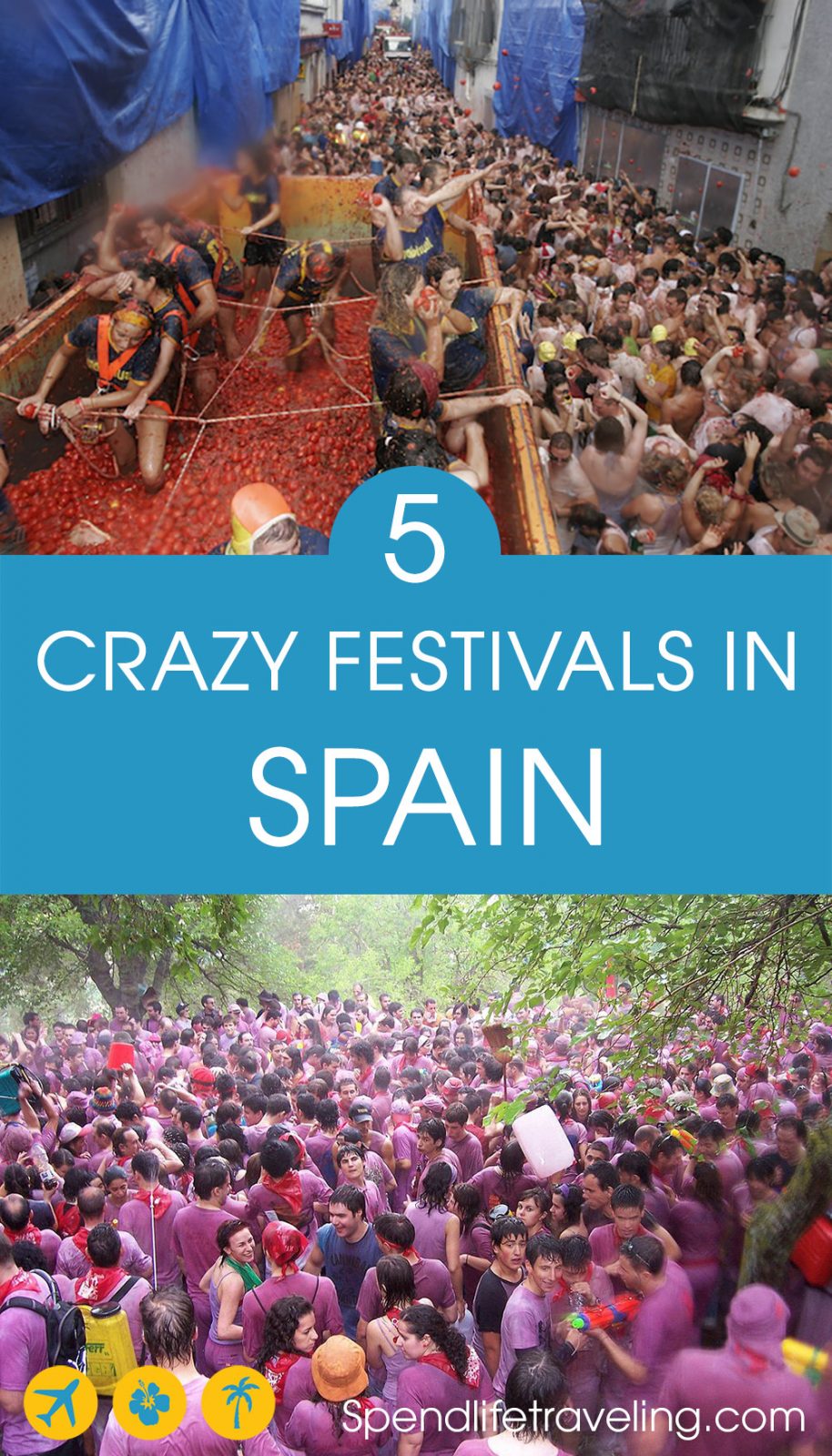 9 thoughts on “5 Crazy Spanish Festivals You Have to Check Out!”