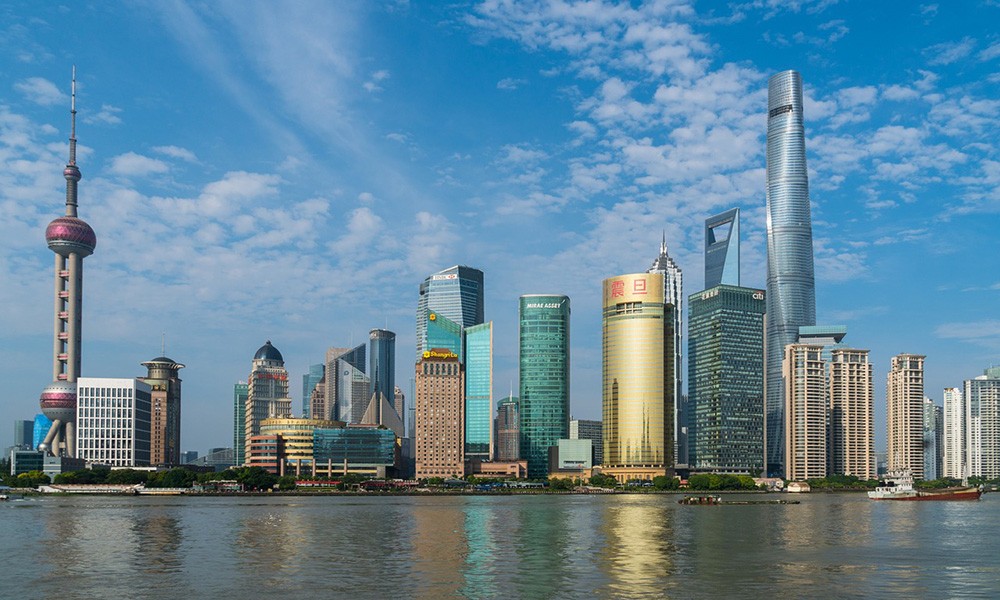 Shanghai is the largest city proper in the entire world. It’s a global city and a major financial center that attracts expats from all over the world.

“I graduated university a few years back and after working in the relevant industry for a little while I kinda fell out of love with it and wanted a new adventure.

So, I worked up some savings and decided to try a year of teaching in China, as I’d previously visited China twice and adored it there!

My first trip to China was a week-long university trip to Beijing, and that really sparked my interest in learning more about Chinese culture and language.

From there, I initially thought I could get myself a job in the music industry in China, but after talking to a few professionals, I realized I needed a pretty solid understanding of Mandarin to get to where I wanted to.

So, I started looking into ways to get myself to China as I felt immersing myself in the language would be the best way to learn it!”

Why Did You Move to Shanghai?

“I actually visited Shanghai and tried life in Shanghai as an intern for two months first, as a kind of “test-run” before signing up to a year contract as a teacher. And I just completely loved living in Shanghai.

As one of the world’s most populated cities, it can be overwhelmingly intense, but this also means there is an infinite number of opportunities here.

For me personally, an extremely fair-skinned, red-headed British girl, I didn’t want to live too far south in China for fear of the scorching summer heat, so Shanghai was the perfect location for me! It’s also a super well-located city, making it a perfect base to travel from and explore more of the country.

During my two month internship, I discovered that Shanghai is a city with many faces. It’s possible to be completely immersed in Chinese living, whilst there are also places you can go when you’re feeling a bit overwhelmed or homesick and want to feel like you’re in London or another western city. 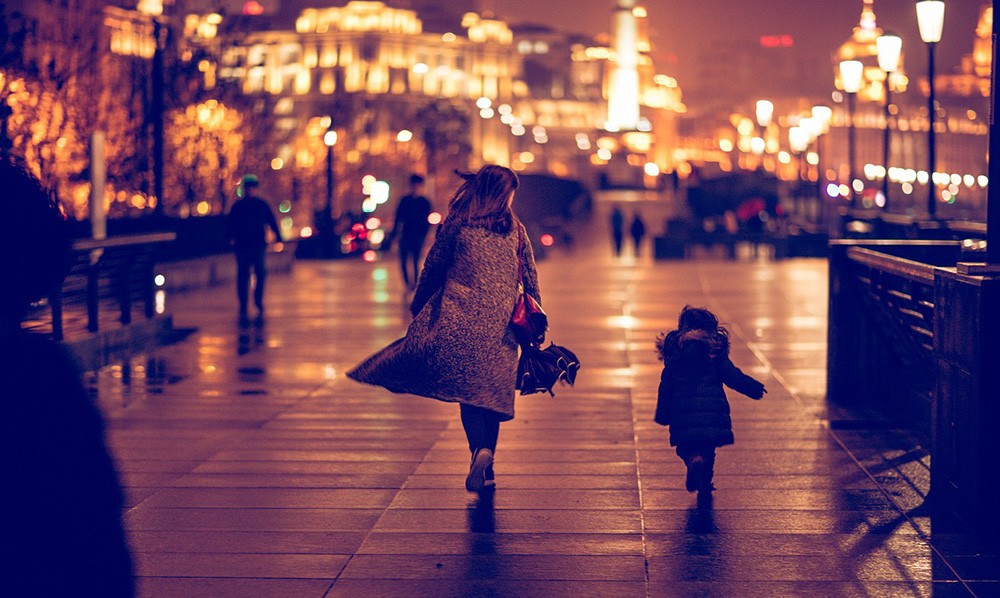 “My favorite thing about life in Shanghai is just the sheer number of things going on.

You wanna learn to crochet? There’s classes. You like swing dance? There are bars that host weekly dance nights. Into your craft beer? You’re literally spoilt for choice here! I’ve been to pub quizzes, Beatles tribute band nights, a feminist festival and eaten more different cuisines than ever before.

I also love that Shanghai is probably one of the easiest cities to travel from.

As a teacher, I get two big holidays in a year which leaves plenty of time for traveling, so it’s great to have 2 airports, 4 major train stations and 3 major long-distance bus stations on my doorstep, allowing me to get just about anywhere in China, or even East Asia, with ease.”

What Do You Dislike About Life in Shanghai?

“Being one of the most populated cities in the world, naturally it’s pretty busy. Rush hour is a nightmare and I’ve actually left my house to go to events/meet friends up to two hours earlier than necessary just to avoid that peak time travel.

The metro system is fantastic and extensive, but even with trains every 2 or 3 minutes during rush hour, it can be an uncomfortable squeeze.

Oh, and the humidity. After a year, I’m kind of getting used to feeling constantly sticky and sweaty, but it’s certainly not pleasant!”

What Is Your Favorite Thing to Do in Shanghai?

“My favorite thing to do in Shanghai is to just explore!

I like to take my camera out with me, pick somewhere to start like a park or a coffee shop and then just wander from there and see what I find. It’s amazing what you can find when you aren’t looking for anything – getting lost down old style back alley street or stumbling across scenic spots I’ve never seen before.

It’s lovely to aimlessly wander around one of Shanghai’s many water towns, take in the views, people watch and, of course, pick up a few street snacks.”

What Is Your Favorite Place to Hang out in Shanghai? 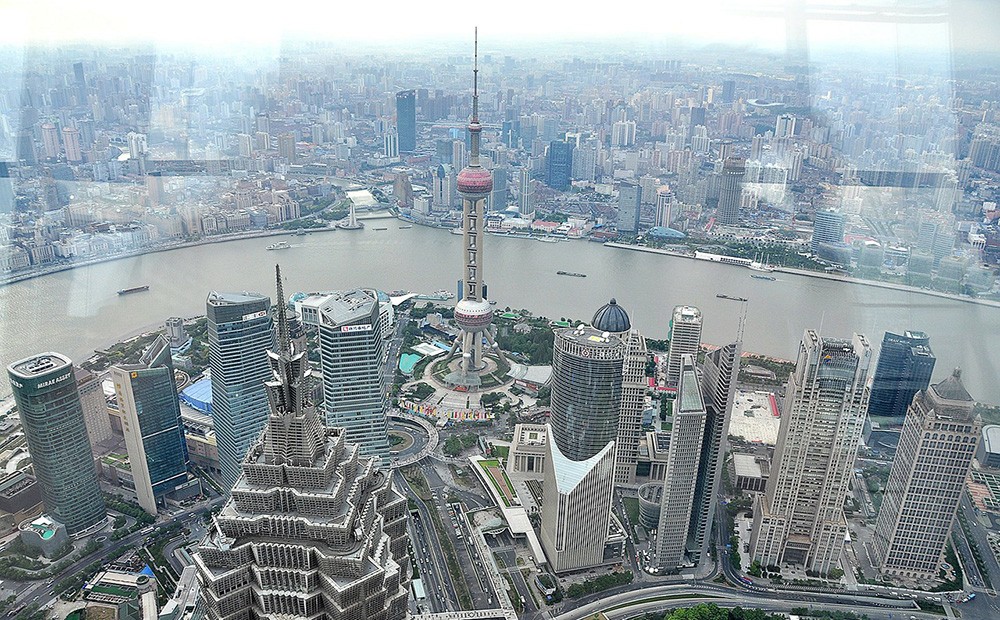 “I’m a huge fan of coffee shops, as I find them a great place to relax, study and work, so I have a few favorites.

Shanghai is full of really great independent cafes and coffee shops, so even though coffee is generally a little more expensive in China than in England, I like to try and carve out a little time each week for a chill out and study somewhere like Cafe Del Volcan or Seesaw Coffee.

Other than coffee shops, I also love spending time in one of Shanghai’s many parks, or at a skating hotspot near the Science & Technology Museum.”

What Is the Expat / International Community like in Shanghai?

“There’s a huge expat community in Shanghai, and there are parts of central areas like Xuhui district which massively cater for expats, with English menus and often English speaking staff.

There are also an insane number of expat events happening all the time, and many courses or classes are offered in English, from gym classes to art courses to pub quizzes.

In central Shanghai it’s certainly not uncommon to see other foreigners around, and there are definitely hotspots around the city for expats.

For expats Shanghai is a city with a lot to offer.”

Any Tips for Moving to / Living in Shanghai?

Get an idea of what life in Shanghai will be like to determine if that fits you. I met so many people in China who had moved here without really knowing what they were getting themselves into.

There’s also a lot of work behind getting visas for China – it’s relatively straight forward for tourists, but to work in China you must have all sorts of documents and police checks and letters from the company you’ll be working for, and you must have a job confirmed before you head over.

Also, be prepared to spend a fair amount of money in your first few weeks of living in Shanghai. Generally, apartments require one month rent deposit, and then two months rent in advance (most landlords require two or three months rent at a time).

Try and learn at least a few words of Mandarin, just for politeness and respect, and people will really appreciate it!”

Any Resources You Found Useful During the Process of Moving to And/Or Building a New Life in Shanghai? 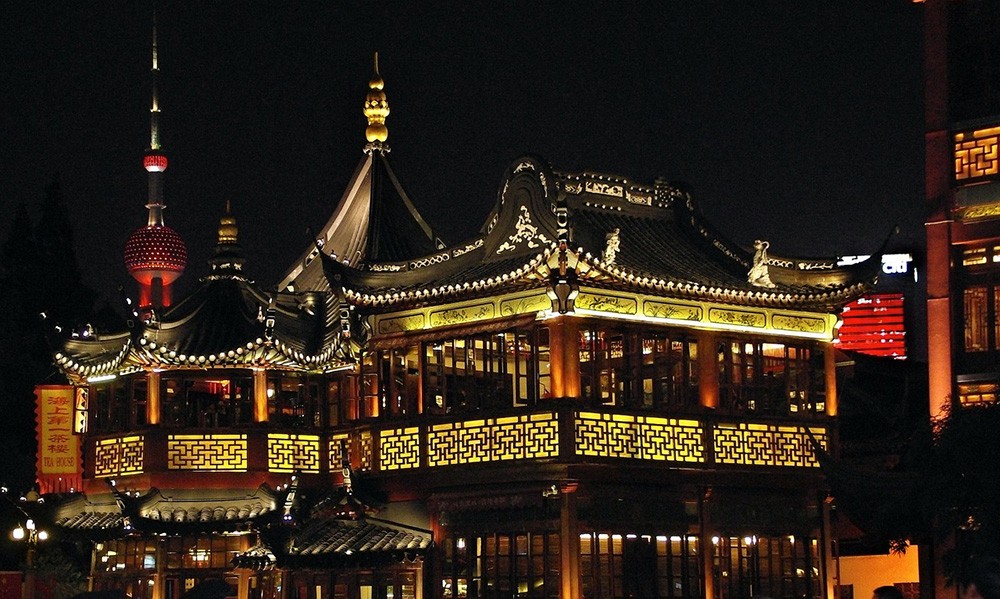 “Check out Smart Shanghai for events, places to eat & drink, tickets and there’s even jobs and apartments on there. TimeoutShanghai is also a great site for things to do in Shanghai.

Definitely download the app WeChat. China basically runs on this app! You can pay for everything, buy movie tickets, book train tickets, play games… it’s like a wonder app!

Also, there is a metro app called Explore Shanghai which allows you to put in your start and end destinations and it’ll show you the best route, the price and the time it’ll take.

One more great travel app is Didi, which is the Chinese equivalent of Uber and has an English interface. Sometimes it’s not easy to hail a taxi; taxi drivers notoriously ignore foreigners trying to flag them down on the street. So Didi can save a lot of time (and frustration!).

Is There Something You Just Have to See or Do When You Are in Shanghai?

“The water towns, definitely! Qibao water town is the most central one and is great for a half day trip.

The Bund, also called Waitan or Zhongshan Dong Yi Lu, is a famous waterfront area and regarded as the symbol of Shanghai. This is definitely one to check off the list, as are the temples such as Jade Buddha Temple.

Something that always amazes people when I take them is the Marriage Market. On People’s Square, each weekend, parents and grandparents of single adults gather with adverts and basically try and find partners for them. It’s quite surreal to witness!

About Liss – an expat in Shanghai

Liss grew up in Brighton, England before moving to London to complete her degree in Music Management. Seeking a new adventure, she pursued a life in China and is currently a primary school English teacher in Shanghai.

Aside from teaching, she spends her time exploring as much of the amazing, diverse country as she can, and has plans to visit every province in China before she leaves. Her adventures are being documented on her blog, Cheshire To China. 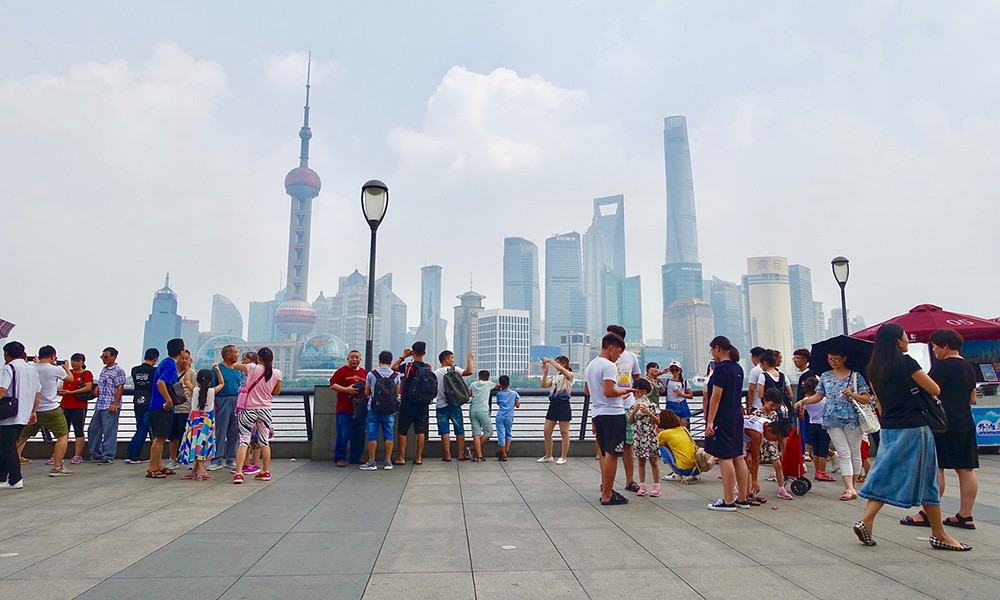 Shanghai, with a population of more than 23 million (with over 9 million migrants), is the largest and traditionally the most developed metropolis in Mainland China.

Shanghai is one of the main industrial hubs of China, playing a key role in China’s heavy industries. People from all over China flock to Shanghai and prices in the city have skyrocketed.

Shanghai is a fascinating mix of East and West and the modern and the traditional. It’s a popular city for tourists and expats from all over the world.

Shanghai has historic shikumen houses that blend the styles of Chinese houses with European design flair, and the city has one of the richest collections of Art Deco buildings in the world.

As there were so many concessions (designated districts) to Western powers during the turn of the 20th century, in many places the city has a cosmopolitan feel. There is everything from classic Parisian style, to Tudor style buildings that give an English flair and 1930s buildings reminiscent of New York or Chicago.

Like this article about expat life in Shanghai? Pin it! 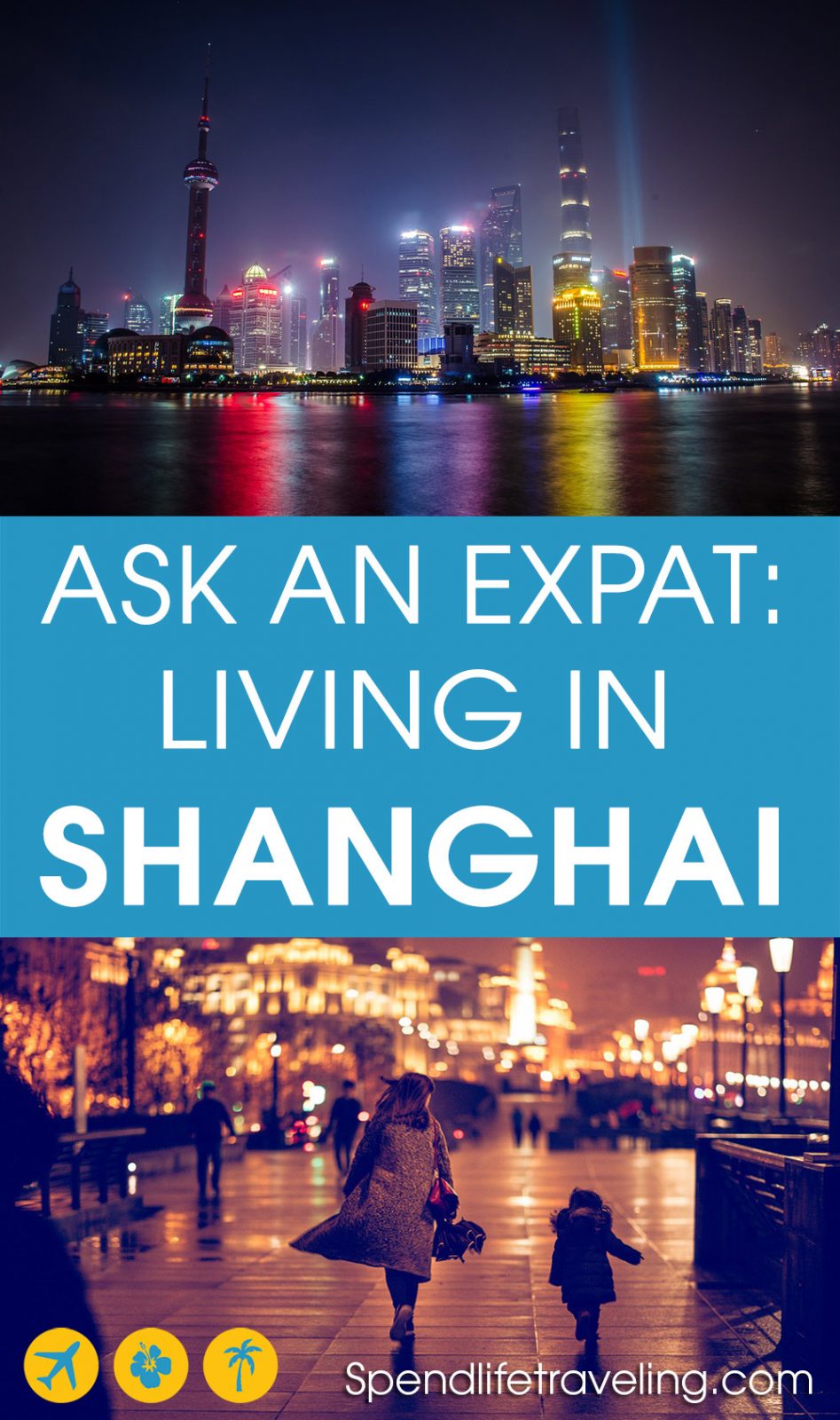 This article about living in Shanghai contains an affiliate link. I may receive a commission for purchases made through this link, at no additional cost to you.

5 thoughts on “Ask an Expat: Living in Shanghai, China”