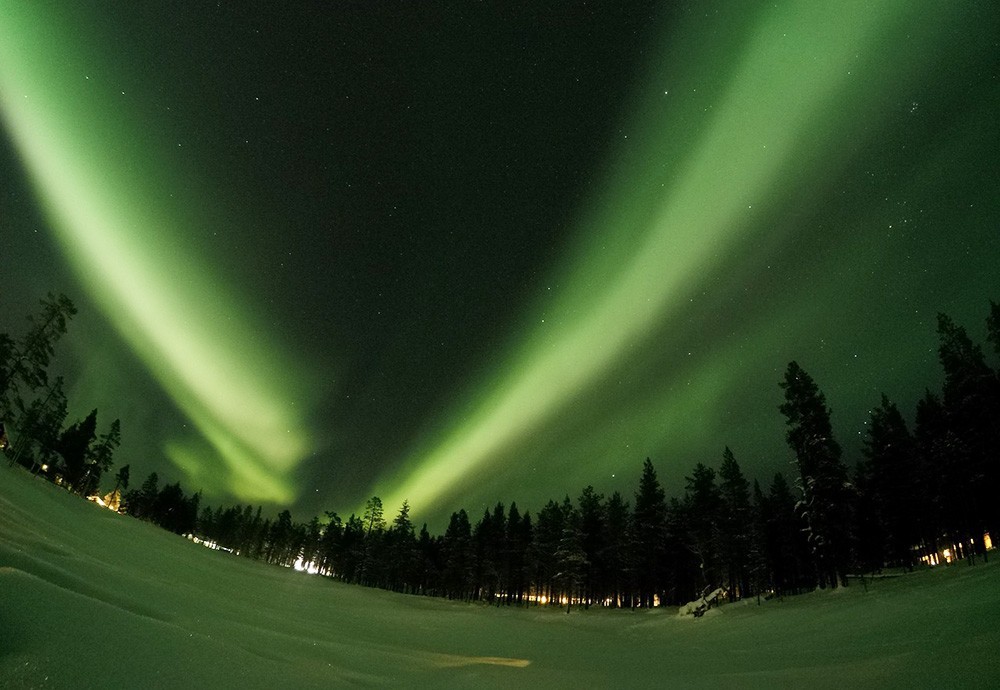 Want to see the northern lights of Finland? Then you want to go to Lapland! And I’ll tell you exactly where and when.

Lapland, Finland’s northernmost region, is not the only region in Finland where you can see the northern lights. But, because of its latitude, it is definitely the best place to see northern lights in Finland simply because your chances of seeing them are the greatest.

And, Finnish Lapland is a fantastic destination to visit! 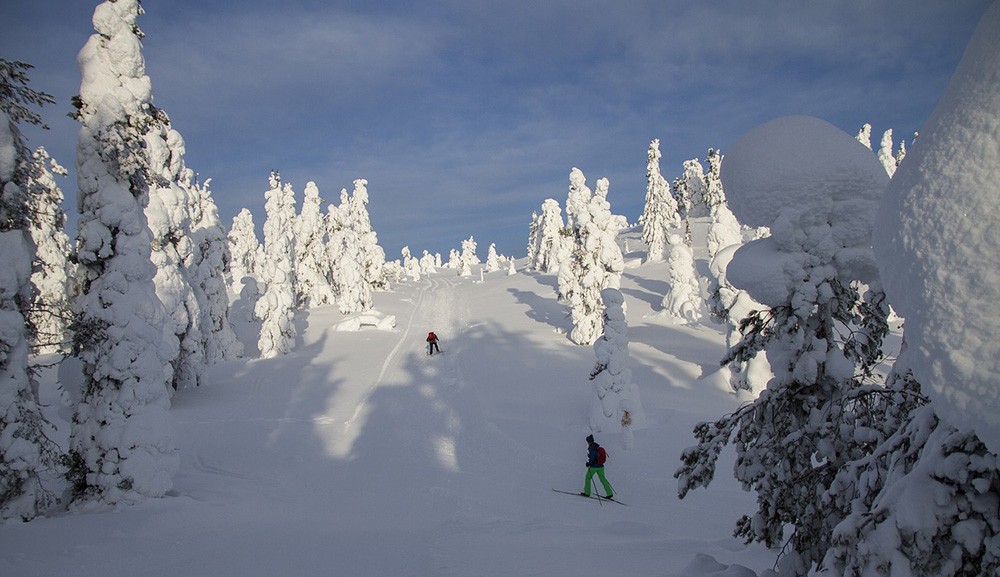 Northern lights, also called Aurora Borealis, do not occur every night and cannot be guaranteed. Therefore if you want to see the northen lights in Finland I highly recommend planning your trip well.

As a Local from Finland, I’d Say There Are Four Rs to Seeing Northern Lights:

Let’s go through these four Rs together!

The Right Location to See the Northern Lights in Finland

As said before the best place to see northern lights in Finland is in Lapland.

But, some places in Lapland are better than others. As the best likelihoods to see auroras follow certain latitudes, it doesn’t make much sense to visit southern Lapland and hope for northern lights.

The chances of seeing aurora borealis in Lapland are the highest around the latitude of Kilpisjärvi, which is a small town located in Finland’s northern “arm” near the northwesternmost point of Finland.

When the sky is clear on that latitude, the likelihood to see the northern lights is three out of four nights!

If you are on Utsjoki latitude, which is the northernmost municipality of Finland, the likelihood of seeing the northern lights is 65%, which is still amazingly great.

In Sodankylä, which is another municipality of Finnish Lapland, your chances of seeing the northern lights are around 50%.

If you want to see the northern lights in Lapland I would recommend planning to stay somewhere between the aforementioned Kilpisjärvi and Pyhä, an authentic Lappish holiday resort.

The likelihood of seeing auroras in this part of Finland is 75-65% and transport to and facilities in the resorts in this area are great.

You can reach all destinations by bus from Kittilä or Rovaniemi airport. If you arrive by train, there are bus connections from the railway station to the resort.

There are Four Major Destinations in This Area Which Make Perfect Places to See the Northern Lights:

Saariselkä is a resort village in northern Finland.

The Saariselkä area became world-famous as a place to see auroras in Lapland due to the Kakslauttanen glass igloos. Nowadays, you can find glass igloos in many other parts of Lapland as well but Saariselkä definitely has its charm.

Ivalo airport serves as the gateway to the whole Northern Lapland and all the way to Nuorgam, which is the northernmost village of Finland.

There are several tiny villages in the area offering peaceful wilderness accommodation and activities. Saariselkä is the biggest hub of them all, known for its string of fells (a high and barren mountain-like formation), the highest reaching 718 meters above sea level.

Saariselkä is connected to Urho Kekkonen National Park, which is one of the most legendary national parks of Finland.

Ylläs resort is known for its seven fells and the longest ski slopes in Finland.

Ylläs is built around two genuine Lappish villages with schools, health centers, and everything else a town needs.

The street lamps of the villages are shut down at 10 pm so that people can better admire the northern lights. Note that I still recommend going outside to see the most beautiful blazing!

Levi is the biggest ski resort in Finland and has a bubbly, wild nightlife.

If you want winter activities and bar hopping, this is your best (and only) choice.

The restaurants are nicely within walking distance from each other (which is not a standard in Lapland). And there are a lot of gigs by famous Finnish artists in the Hullu Poro Arena (literally: Crazy Reindeer Arena).

There’s also a riding stable near Levi center. Galloping in the snow has been one of my favorite winter activities!

Only an hour and a half of driving and you have reached the southernmost resort to admire fell-Lapland, as we say in Finland.

The region is versatile, including a working amethyst mine, possibly the best fresh donuts in Lapland in the cafe next to the mine, and the deepest gorge in Finland which is a must if you are visiting Pyhä. The gorge used to be a sacred place of ancient Sami people.

Tip: If you decide to stay in the Rovaniemi area there are some incredible Lapland tours you can do to see the northern lights.

You can go on a snowmobiling tour, a photography tour or go to a forest sauna while enjoying the northern lights. Or, if you are looking for something really unique you can book a northern lights flight or do this crazy ice floating! 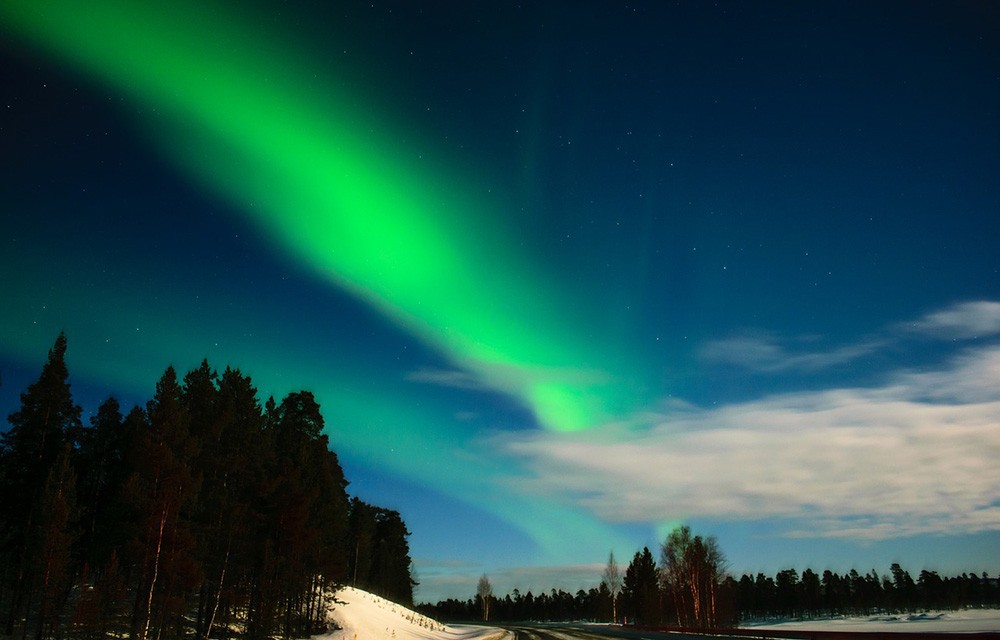 The best season for northern lights is from October to April.

Auroras appear throughout the year but they are almost always invisible in spring and summer because it’s so bright in Lapland. You have probably heard about the midnight sun in Lapland during the summer months as the sun never sets.

Autumn auroras start in September but are more fickle.

Autumn is a great time to visit Lapland as it’s glorious there with the fall foliage. If you are lucky, you can see the magnificent northern lights by night and the burning red, orange and yellow colors of nature by day.

The Right Micro-location to See the Northern Lights in Lapland

Artificial light makes it impossible to see auroras. Make sure there are no street lamps and decorative lamps outside. It must be dark around you.

A frozen lake is a great spot to hunt for northern lights.

The most common time for auroras to appear is around midnight.

The Right Attitude to See the Northern Lights in Lapland

Don’t let cloudiness stop you from going outside because the weather changes quickly in Lapland.

Take hot cocoa with you and head outside every night. Your chances are zero in bed!

What Are Northern Lights or Aurora Borealis? 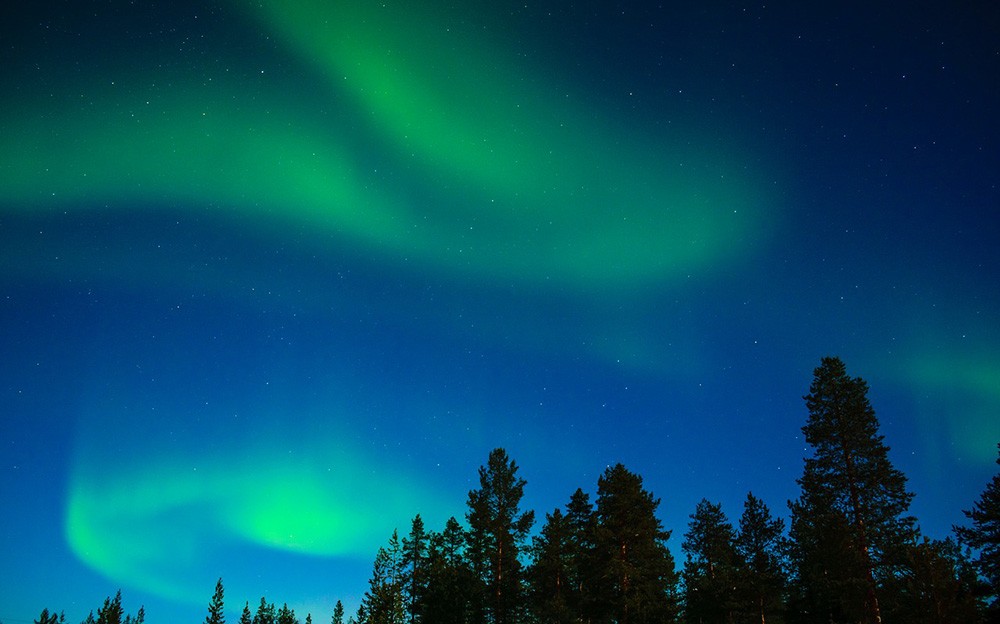 The Aurora is a natural light display caused by collisions between electrically charged particles released from the sun that enter the earth’s atmosphere and collide with gases such as oxygen and nitrogen.

Auroral displays can appear in many vivid colors, although green is the most common. Red, yellow, blue and violet are also seen occasionally.

The auroras can appear in many forms, from small patches of light that appear out of nowhere to streamers, arcs, rippling curtains or shooting rays that light up the sky with an incredible glow. 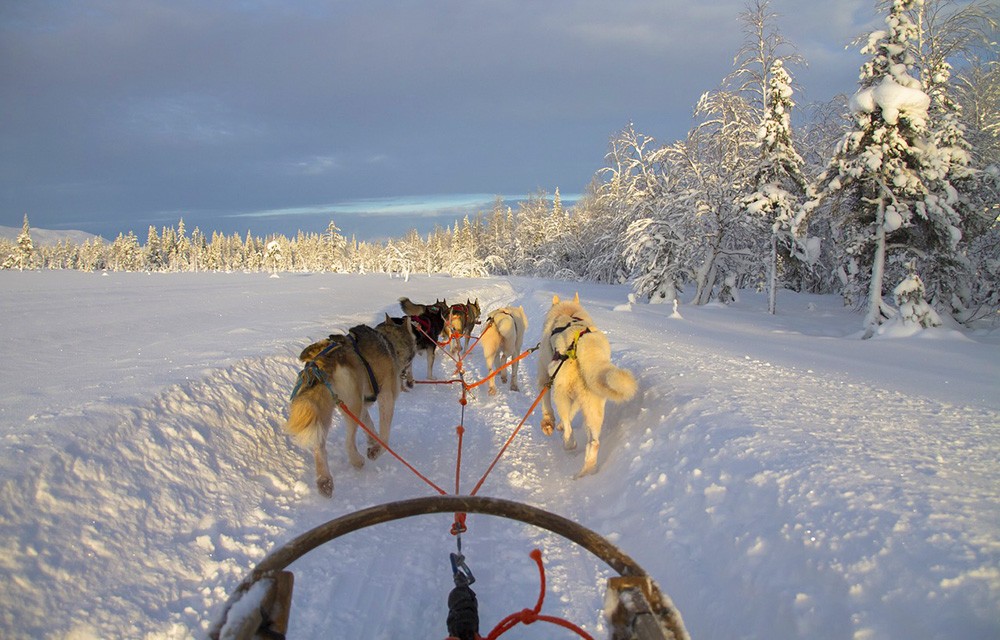 Lapland is known for its vast subarctic wilderness, ski resorts and natural phenomena including the midnight sun and the northern lights.

In winter the sun is not seen for days on end during the polar night (kaamos). Kaamos is a mystical period between December and January when the sun does not rise at all. Nonetheless, it is light from 10 am until 3 pm and white snow makes this period much lighter.

Other Articles About Finland:

Like this article about the best places to see the northern lights in Lapland? Pin it! 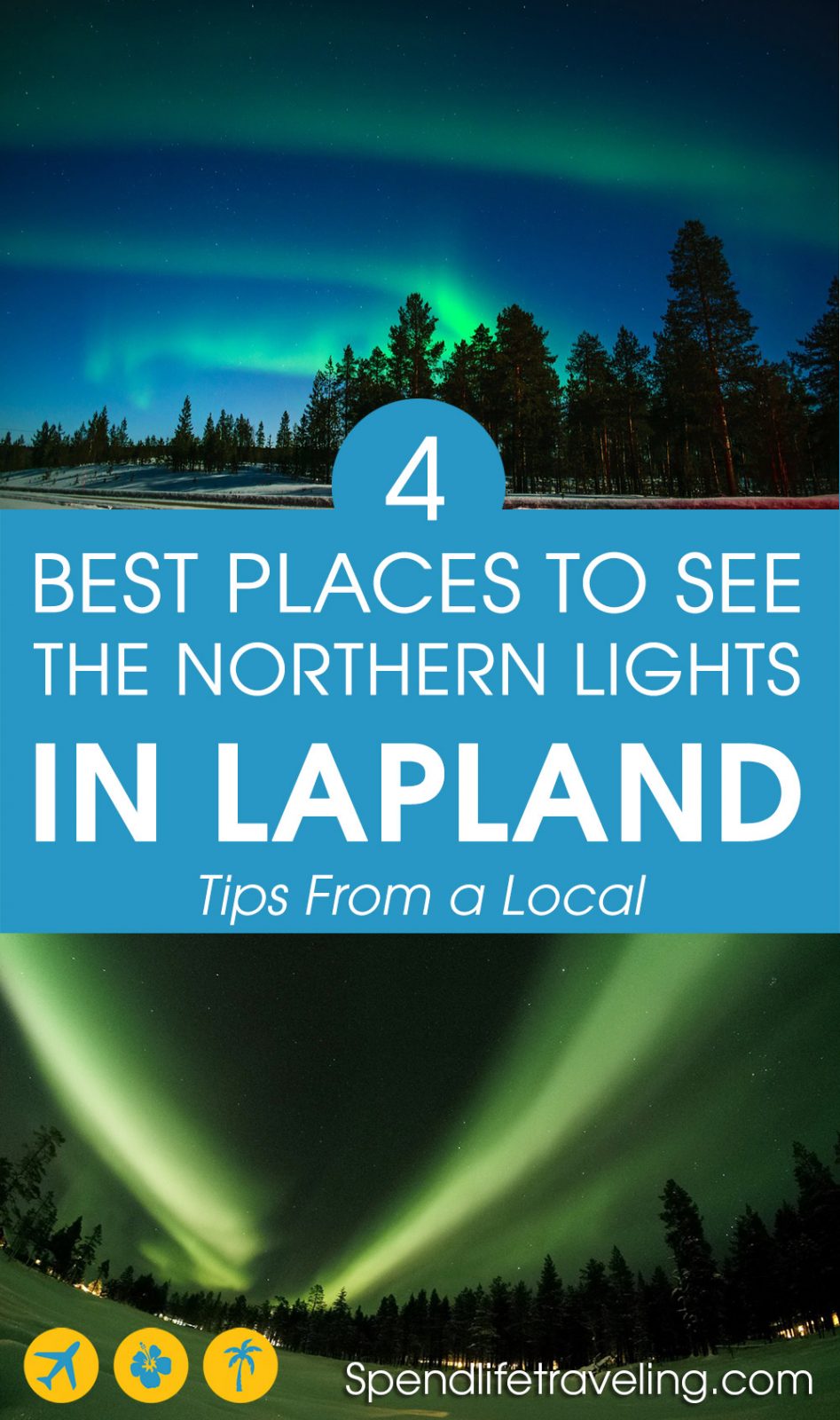 This article about the northern lights of Finland contains affiliate links. I may receive a commission for purchases made through these links, at no additional cost to you.

11 thoughts on “Best Places to See the Northern Lights in Lapland, Finland”