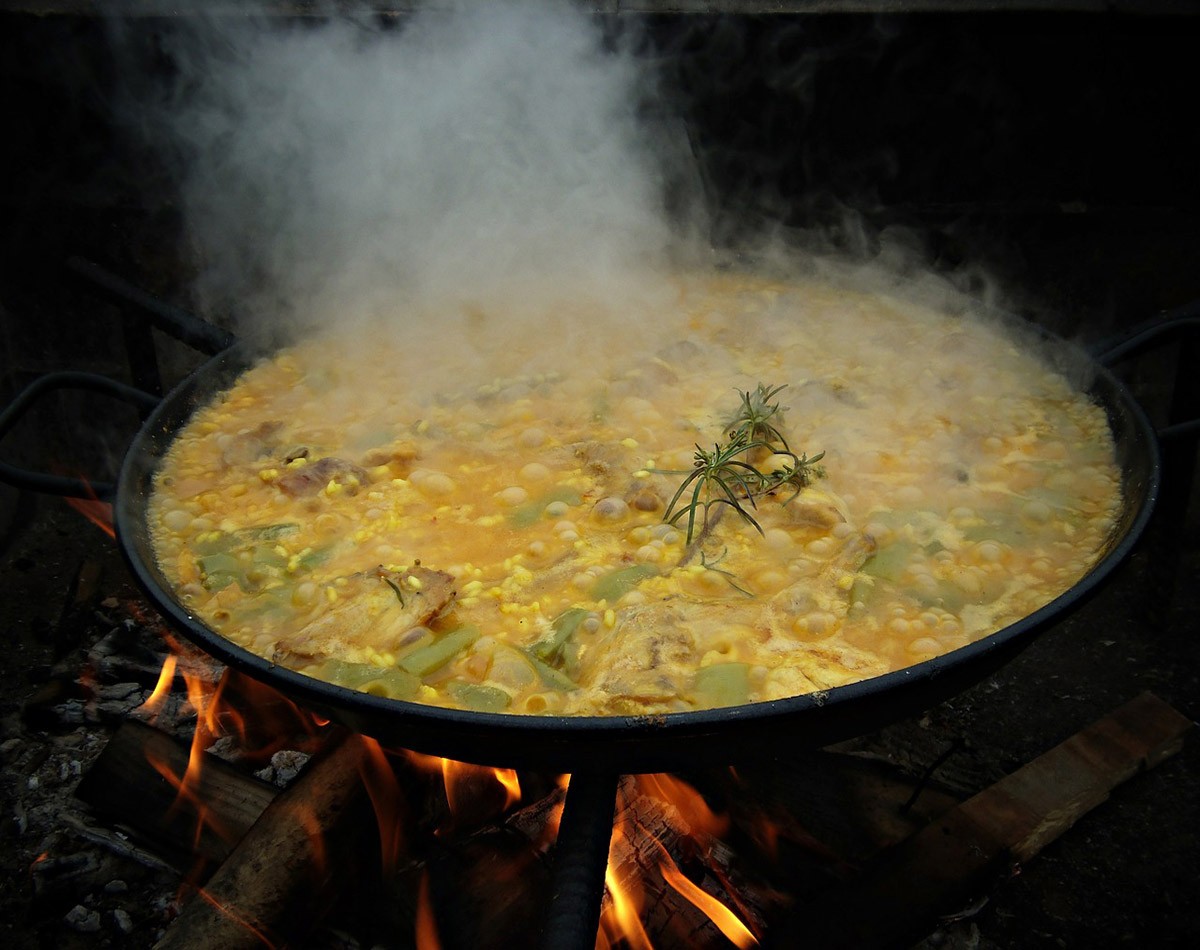 Did you know that Valencia is the birthplace of paella?

Unfortunately, as I found out the hard way, that doesn’t mean every restaurant in Valencia that serves paella actually does a good job at it! But, if you are looking for the best paella in Valencia continue reading because I have some great recommendations!

To understand why, you have to realize that, to a Valencian, a paella is as much an event as it is a dish. It takes a lot of time and effort to cook a paella, so the dish is reserved for celebratory lunches and Sunday afternoon family gatherings. This makes paella a proud cultural institution.

That’s the one Valencians will call “Valencian paella”. Additionally, you can also find seafood paella and vegetable paella throughout the city.

So, who makes the best paella in Valencia? Everyone here has an uncle or a grandfather who will lay claim to that distinction. If these same people recognize a restaurant’s paella as worthy, that’s high praise.

There are hundreds of restaurants in Valencia that serve so-called paella, but there are only a handful of places whose paellas pass local scrutiny.

Below are seven of those restaurants.

TIP: If you’re making plans to have a paella in Valencia, call ahead to book a table. The kitchen typically needs extra prep time for this dish.

7 Restaurants to Eat the Best Paella in Valencia

The nearly 100-year-old Casa Carmela in the beachside Malvarrosa neighborhood has been a local favorite for generations.

The staff here follow the tradition of cooking paella over orange wood then serving the pan in the middle of the table. The food here is so good that the kitchen was awarded a Plate from the Michelin Guide.

Yes, if you are looking for the best paella restaurants in Valencia this place should definitely be high on your list!

Every day, a handful of paella recipes are available. The kitchen just asks that anyone who wants to try a Valencian paella or a vegetable paella call in advance, as those are made to order, and they’re intended for tables of at least two people.

TIP: Casa Carmela only opens for lunch. Dining hours are from 1 p.m. to 4 p.m. Tuesday through Sunday.

El Racó de la Paella in the Campanar neighborhood is another restaurant that adheres to tradition: woodfire heat, local ingredients, and only open Tuesday through Sunday for lunch.

In addition to Valencian paella and seafood paella, the kitchen prepares a variety of rice dishes, including arroz del senyoret (lots of calamari, tuna, and prawns) and arroz negro (made black with squid ink).

TIP: A lot of the best restaurants in Valencia are well-known among tourists. This one’s a little under the radar. That’s great news for anyone craving a truly authentic experience.

Many Valencians will tell you that the best paella in Valencia is served down in El Palmar, a village by the Albufera nature reserve. It’s a 30-minute drive south from Valencia city center and makes for a great day trip from Valencia.

There are several restaurants serving paella in El Palmar, and Restaurante El Graner is among the best. The kitchen serves three rice dishes: arroz del senyoret, arroz negro and Valencian paella. El Graner’s paella has both chicken and rabbit in the recipe.

TIP: El Graner’s daily special is a three-course meal featuring a choice of starters, a plate of paella, and a dessert, for 15 euros.

Pasqualet is just down the street from El Graner in El Palmar, and its kitchen can lay claim to some of the best rice dishes anywhere in Spain.

In addition to the Valencian paella, there are 11 other rice dishes, including arroz de bogavante, made with a big, succulent lobster.

In fact, the seafood options here deserve just as much attention as the paella.

There’s a rice made with carabinero shrimp and a starter portion of steamed mussels that are absolutely worth trying.

TIP: Pasqualet is only open four days per week, Thursday through Sunday. Opening hours are 1 p.m. to 4 p.m.

A few blocks south from Pasqualet in El Palmar is Restaurante Bon Aire, whose kitchen has a pretty extensive menu — and several awards to its credit, including the Concurso Internacional de Paella Valenciana award for best paella in the world!

The interesting thing about Restaurante Bon Aire’s traditional paella is there’s an option to get it made with duck (plus chicken, rabbit, and snails).

In addition to the many rice dishes on Bon Aire’s menu, there are fresh seafood options and a couple of grilled steaks.

TIP: If you are visiting Valencia with a family or big group, Restaurante Bon Aire has something for everyone. This might be your best bet if not everyone in your group is in the mood for paella. Also, Bon Aire is open on Monday, a day when many Valencian restaurants are closed.

Just below the City of Arts & Sciences, where the city’s streets begin to give way to the horta sud and its rice fields, sits the two-story building that’s home to Alquería del Pou.

The kitchen here has an extensive menu of various paellas and other rice dishes, plus lots of fresh seafood options.

When they’re in season, the grilled artichokes are an excellent starter option here!

The restaurant has a nice garden area perfect for warmer days and there is free on-site parking.

TIP: If you’re looking for where to eat paella in Valencia with a big group (12-plus people), Alquería del Pou has plenty of room to accommodate. There are a handful of set menus for big groups and ample space in the two-story dining area. Just be sure to make reservations in advance.

About 20 minutes north of the city in Meliana is Barraca Toni Montoliu, a gorgeous old house where you can immerse yourself in the paella experience.

The setting is important. Meliana is a small town in the middle of the Horta Nord, an agricultural area that for centuries has sustained the Valencian Community with rich food production. Go here, and you’ll find yourself surrounded by orange trees, wild lavender, olive trees, and vegetable fields.

Toni Montoliu’s hospitality and traditional paella — always made with fresh, seasonal produce from his farm — give visitors a fantastic glimpse into what it takes to get the dish from the farm to the table.

TIP: Metro Line No. 3 will take you close to Barraca Toni Montoliu. Get off at the Meliana stop, and it’s just a few hundred meters’ walk from there.

Enjoy Tasting Some of the Best Paella in Valencia!

I’ve been living in Valencia for a few years now and it’s been interesting to see how proud the Valencians are of their paella.

But, even if you are only in the city for a few days, I highly recommend making time to visit at least one of them!

Tip: if you do want to eat a good paella close to the city center I’d suggest Raco de Turia in the Canovas neighborhood. It’s one of the priciest paellas you can get in Valencia, but the paella is delicious and authentic.

And what makes this one of the better paella restaurants in Valencia is the ambiance. It’s a traditional, intimate restaurant with great service. Plus, even though it’s so close to the city center you will find few tourists here.

Map of the Best Paella in Valencia

Do you like this article about the best paella in Valencia? Pin it!

1 thought on “Best Paella in Valencia: 7 Restaurants Competing for the Crown”