Valencia has a growing number of expats and digital nomads, and for good reason!

I am currently living in Valencia myself and I think the quality of life here, especially for expats and digital nomads, is great.

I have been really looking forward to doing this interview with my friend and fellow expat Sarah, who I have known for several years.  Sarah and I first met in the Maldives, when we were both living there. Like myself, Sarah is a digital nomad who can do her work from anywhere in the world. But for the past year she has been calling Valencia home.

Also Read: Why Spain is a Great Destination for Digital Nomads

This interview is part of the Ask an Expat series. In this series, I interview people living all over the world but outside of their home country. I try to help paint an honest picture of the ups and downs of life abroad, share tips for anyone thinking about moving abroad and information about what to see and do in the city, town or country the expat lives in.

“I’ve been living overseas for the last 7 years while working as a travel journalist, starting with exploring tropical island life in the Maldives and Sri Lanka for a few years before moving to Nice in southern France in 2015.

The French Riviera was incredibly beautiful but Nice was a very small town with a large percentage of pensioners, and not many younger people on the same wavelength as me so after a year I decided it was time to find the next challenge.

I wanted to find another European town with plenty of sunshine, good people and a low cost of living, but one which was slightly offbeat and not over-saturated by too many foreigners.”

Why Did You Move to Valencia?

“I visited Valencia for a long weekend during summer in 2016 and instantly loved the energy, the architecture, and the overall vibrancy of the city.

It seemed like a fun place full of lots of creative types, digital nomads, start-ups, alternative culture, and funky independent shops. Valencia reminds me of Shoreditch in London or Brooklyn in New York 10 years ago.

I also wanted to move to a place where I already knew someone this time (after starting out on my own in new places so many times before, which was actually pretty tough). I already had two friends in Valencia, so that sealed the deal, and I finally made the move to Valencia at the end of 2016.”

“The Valencians and expats are extremely friendly and welcoming.

Life just seems easier here and less stressful than anywhere else I’ve lived so far. I love the outdoor lifestyle, and also the fact that everyone of all ages seems to enjoy socializing every night of the week here. It never gets boring. After living on a tiny island in the middle of the Indian Ocean, that’s a very good thing!

And then there’s so much to do within 1-2 hours of the city itself. Valencia is close to some beautiful mountains where you can go hiking in summer and snowboarding in winter.

There are also some good scuba diving spots just a short distance away and some vineyards where you can go wine-tasting. And of course, Valencia is famous for being the birthplace of paella. The rice is grown in the fields surrounding El Palmar, where you can get an authentic canal-side paella for 9 euros after stopping off at Albufera for a boat ride on the lake.”

Also Read: Where to Eat the Best Paella in Valencia and The Best Day Trips From Valencia

What Do You Dislike About Living in Valencia?

“The only thing I feel Valencia is missing is a surf beach. The biggest waves I’ve ever seen are about 1-2ft at the most.

There is a surf school for beginners but I think a (cheap) excursion to somewhere else is necessary to find any surf. Not that I am by any means an expert, but it would be nice to have somewhere close-by to practice.”

What Is Your Favorite Thing to Do in Valencia?

“Going to the Turia. It’s a 5 mile-long riverbed which was transformed into an amazing park in the 1960s filled with exotic species of plants and trees, and intersected by beautiful medieval and gothic bridges.

I like walking through it and pondering life, but it also has great jogging and cycling tracks. You can meditate there, or try the yoga and fitness classes.

It’s also a nice spot to go to with friends for a picnic or to check out the regular events such as the wine festival and the flamenco festival. There is an open-air cinema in the summer, too.

Also Read: Top Things to Do in Valencia

What Is Your Favorite Place to Hang out in Valencia?

“It’s so hard as there are hundreds of bars, cafes, and restaurants and I think that even if you stayed 10 years you wouldn’t be able to try all of them.

But, if I try to narrow it down: Dulce de Leche in Ruzafa for the incredible towering cakes slathered in fruit and frosting, La Girafe at Patacona beach to enjoy some mojitos whilst sitting on hammocks in the tropical back garden, and the tongue-twister of a club named Barberbirborbur in Ruzafa, for old school tunes and good vibes.”

Also Read: Where to Find the Best Rooftop Bars in Valencia

What Is the Expat / International Community like in Valencia?

“I love the international community in Valencia! This is the first city in the world I’ve lived in where I’ve really felt like these are my kind of people.

The expats in Valencia are really friendly, fun, open-minded and curious. There’s a great sense of entrepreneurship, exploration, and creativity; a feeling that all things are possible here.”

Any Tips for Moving to / Living in Valencia?

“You can walk almost everywhere but having a bicycle is handy too. Or, if you don’t want to buy a bicycle, there is Valenbici, which is the city’s bike-sharing system.

Even though Valencia is on the coast, the beach is a 45-minute walk from the town center or around 30 minutes by bus or metro. So you need to decide where you want to live in Valencia: right next to the sea, or in the city center for easy access to all the shops, bars and cultural things the center offers.

Although rent has been going up recently, the cost of living in Valencia is still low. Check out Idealista.com to get an idea of property prices – both to rent and buy.

Properties for rent on Idealista are generally rented out for a minimum of 12 months. If you want to start with something for less than a year then Uniplaces is a good option, especially for renting rooms instead of apartments.

And lastly, although the climate is very good for a temperate location, you will need a coat in the winter and houses can get really cold because they are often poorly insulated and rarely have central heating.

Any Resources You Found Useful During the Process of Moving to And/Or Building a New Life in Valencia?

“I started a Facebook group for remote workers and digital nomads in Valencia, called Valencia Coffees & Co-working. We meet once a week to work on our laptops from a cafe, then at 6pm we usually stop and have some wine and often end up having dinner and going to some more bars. I’ve made some brilliant friends from the group. We also organize wine tastings, hiking trips, trips to cultural festivals and things like that via the group.

CouchSurfing and Tinder are also used a lot here for socializing, along with Meetup.com, although I prefer CouchSurfing of the three.

Also Read: Where to Live in Valencia? A List of the Most Popular Neighborhoods

Is There Something You Just Have to See or Do When You Are in Valencia?

“If you want to sample one of the craziest firework festivals in the world, visit during Fallas (February/March). But if you don’t like loud noises, non-stop, day and night, I wouldn’t recommend it!

Other than that, I’d say that Valencia is a collection of sights and feelings rather than just one highlight or activity; the people, the energy, the diverse architecture, the street art, the parks, the long beach, the lively nightlife and the random, spontaneous experiences you can get caught up in without even planning for them.”

About Sarah – Digital Nomad and Expat in Valencia

Sarah Harvey is a British travel journalist who has written for publications including CNN International, the LA Times and Fodor’s. She also blogs, contributes to guide books, and writes website content for travel and tourism organizations.

So far, Sarah has lived in London, Cairns, Male’, Colombo, Nice, and Valencia, with plans to continue to explore the nomadic life in many more destinations to come. 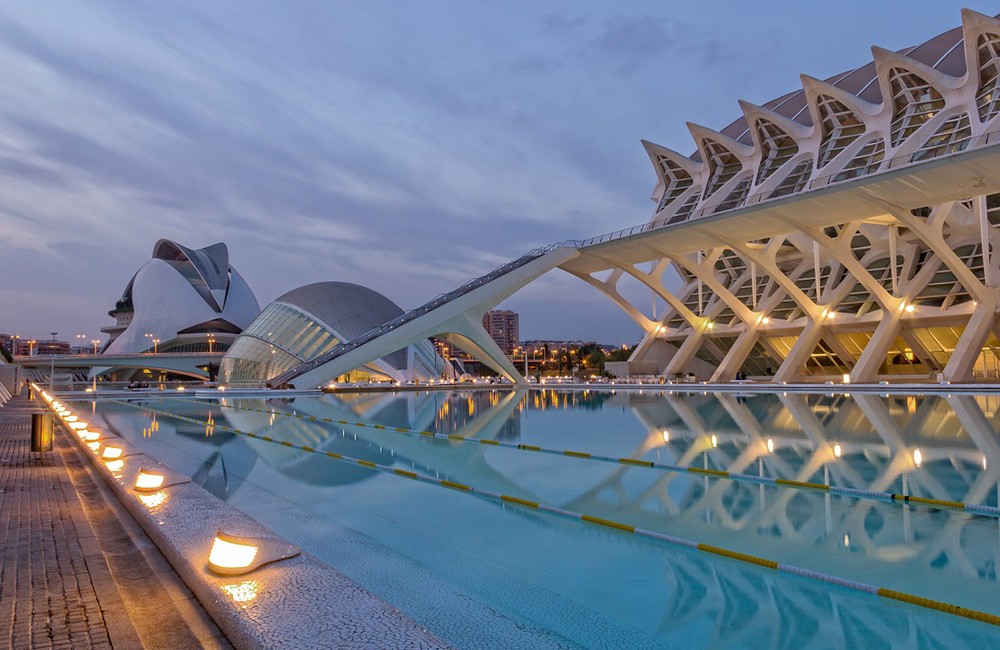 Valencia is a charming city and one of the oldest in Spain. It is the third Spanish city in terms of importance and population, and the 15th in the European Union.

Valencia is on the Mediterranean Sea, approximately four hours to the south of Barcelona and three hours to the east of Madrid. The city is famous for its Fallas Festival in March, for being the birthplace of paella, for hosting the “2007 & 2010 America’s Cup”, and for the massive architectural project by Santiago Calatrava called The City of Arts and Sciences.

Although Valencia is an increasingly popular tourist destination, it is not nearly as touristy as Barcelona or Madrid. With its beautiful historic center, countless museums, long beaches, great climate, and good food, it is well worth a visit.

Or, do as many others and move to Valencia (temporarily). Learn Spanish

at one of its many language schools, study at Valencia University, look into local jobs or if you have reached that age, enjoy retirement on the Mediterranean coast. There definitely aren’t many places in the world with a better quality of life than this part of Spain!

Then also check out some of these expat interviews:

Are you a digital nomad looking for your next destination?

Then check out these articles about popular digital nomad destinations:

Like this article about expat life in Valencia, Spain? Pin it! 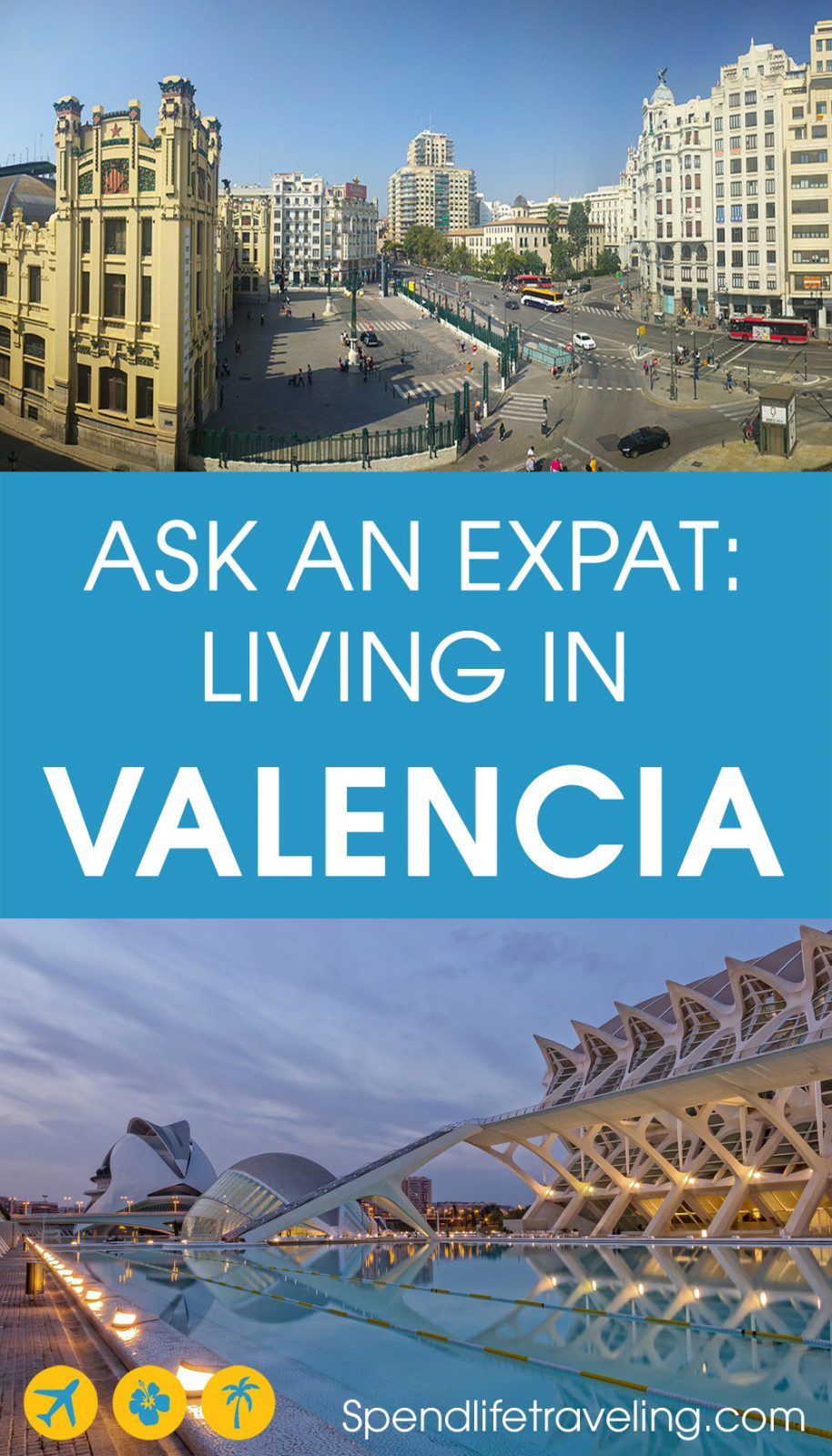 This blog about living in Valencia contains an affiliate link. I may receive a commission for purchases made through this link, at no additional cost to you.

48 thoughts on “Ask an Expat: Living in Valencia, Spain”