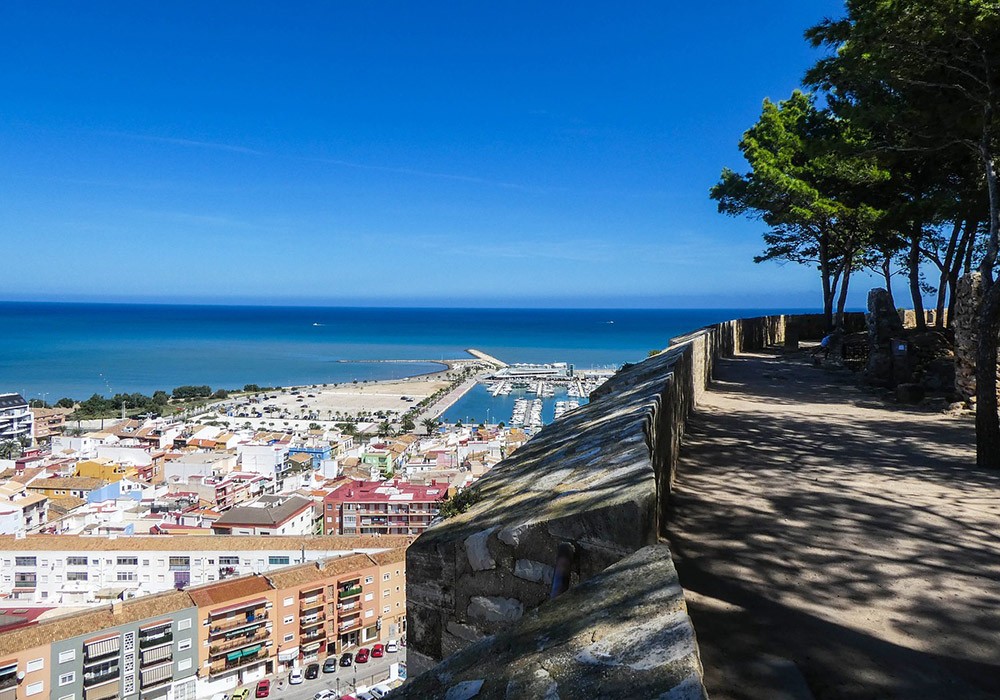 Denia is a popular coastal city for foreigners to move to. Either to retire or to work at a slower pace and enjoy the Spanish way of life.

But what is moving to and living in Denia really like?

I have lived on the Costa Blanca myself, in Moraira, and later I moved to Valencia.

But for some reason I never got to know Denia well. Therefore I enjoyed the chance to do this interview with my friend Steve who is currently living in Denia. 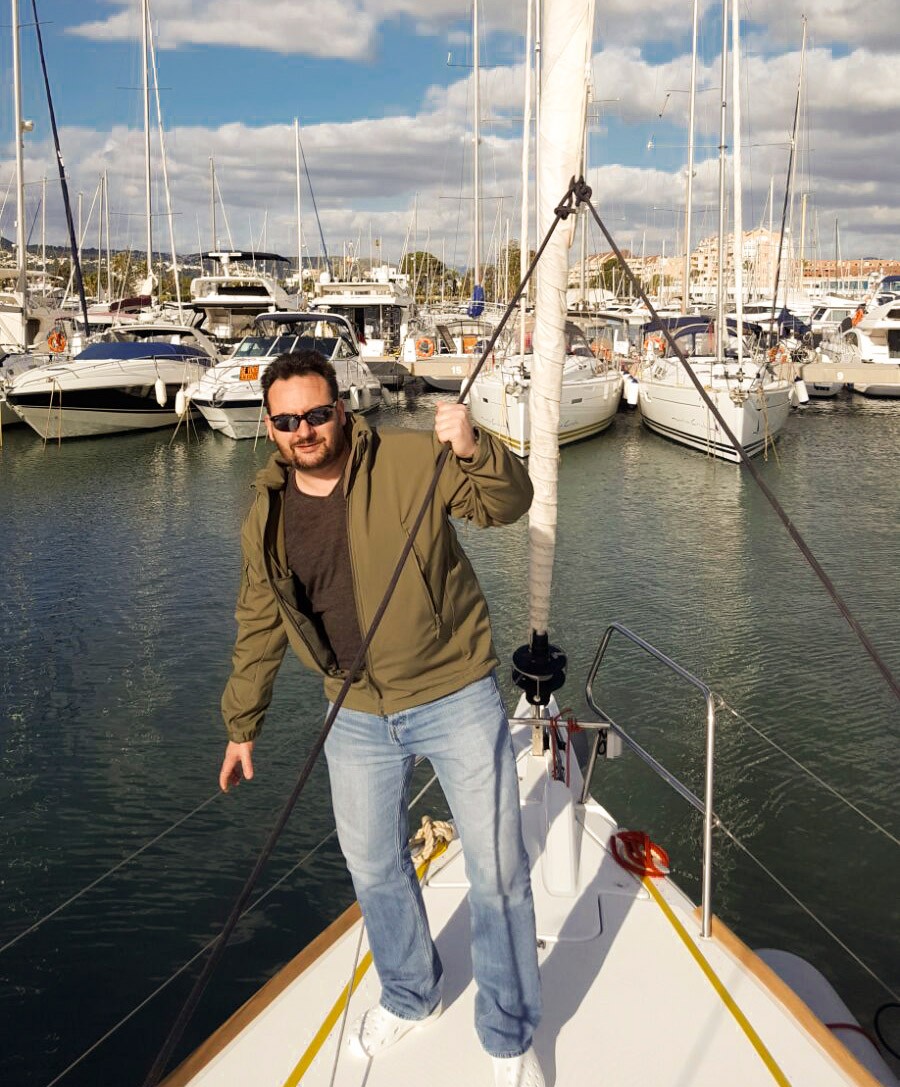 “So, I’ve been living in Spain since 1993 and have now spent more than half my life here. Most of that time I lived in Madrid, which is a great place and gave me a career, but I always pined for the sea.

Two years ago, I converted my work to 100% online which now allows me to work from anywhere with a good internet connection.

I now give English instruction to companies and professionals from home via Skype and email which allowed me to move out of the city without the need to change jobs or try to establish myself in a new town, starting from scratch.”

Why Did You Move to Denia?

“I came to Denia for the first time a couple of years ago in April to hang out on a friend’s boat for a weekend and go sailing up and down this stretch of the coast.

At the time, I was thinking of moving to Alicante, but after exploring the town a little that weekend, I decided Denia would make a nice “starting point” in my life out of the big city.”

“Well, let me set you up with a mental image. Imagine sitting at a marina terrace bar overlooking the town, the castle on the hill, with the mountains of the Montgo natural park to the left under a beautiful clear blue sky. You’re drinking a freshly squeezed orange juice and munching on pan con tomate in short sleeves and you suddenly remember, it’s November!!

The climate is one of the things I like most about living in Denia; mild in winter and not overpoweringly hot in summer.

Yes, Denia gets its share of tourism in the peak season and quiets down in winter, but unlike other towns along the coast, it pretty much stays open all year round. There are enough full-time residents to maintain a nice atmosphere with many boutiques, bars, restaurants, and big stores although for the latter you’ll most likely need wheels to get to.

I read somewhere that Denia is one of the Spanish towns with the highest number of local events (Fiestas). From Fallas to pilgrimages, Saint days, bonfires on the beach, Moors and Christians, and many more throughout the year.

Fallas, which simply put is the burning of giant paper Mache effigies in the street, can be particularly noisy with continuous firecrackers and fireworks for a week. That’s around mid-March, just so you know. Either plan to live it or plan to avoid it 😊”

Also Read: Celebrating Las Fallas in Valencia – Everything You need to Know

What Do You Dislike About Living in Denia?

“Hmmm, this is going to be a short one. Let me see.

Many businesses still close for siesta (which can be any time between 1pm and 5pm) which is annoying.

Oh, yes and going back to my comment about Fallas…. Nice to see, but not so nice to hear….at least not for a whole week!”

What is Your Favorite Thing to Do in Denia?

“Walking around, I guess.

Soaking up the atmosphere, checking out the variety of boats at the marinas, enjoying the beach either for strolling or having a dip in the Med and playing padel tennis (more on that in a moment).”

What is Your Favorite Place to Hang Out in Denia? 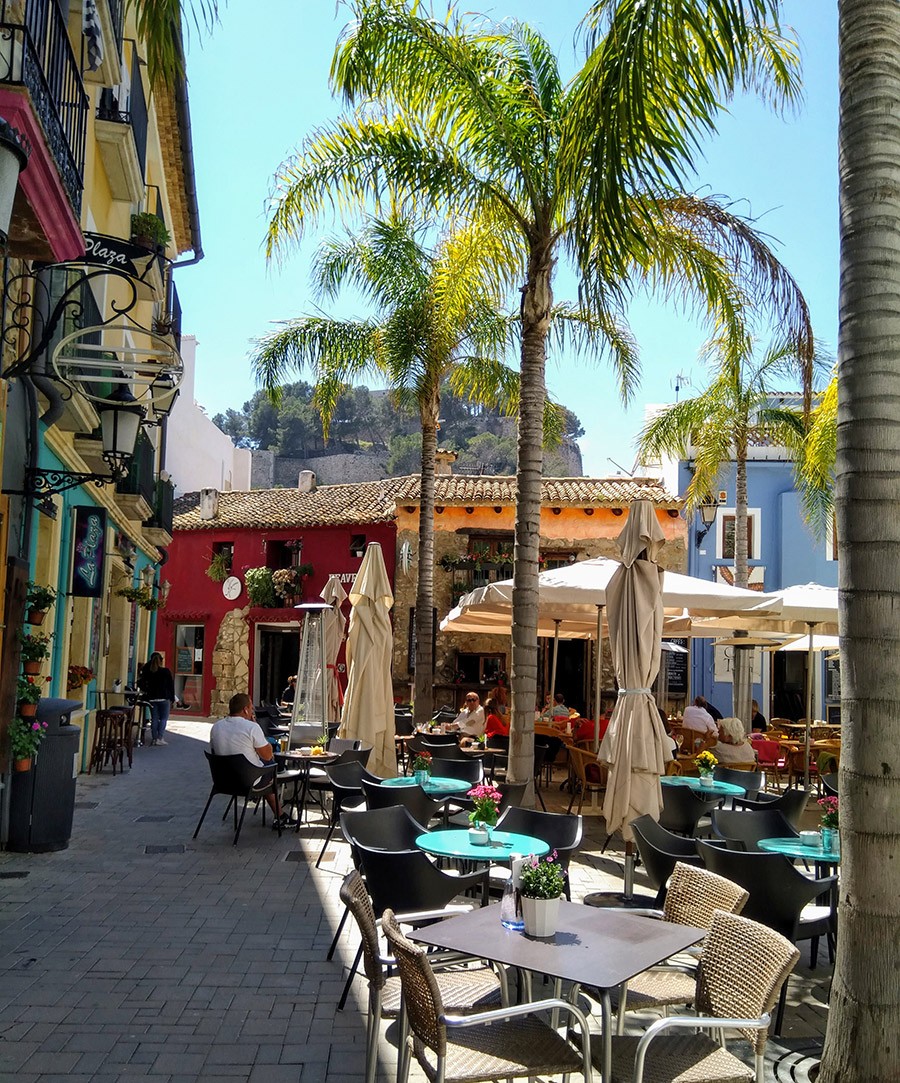 “I have been living in Denia for quite a while now, but I still have many bars and restaurants to try out. But I can say, in all the places I have been to, I have not had a bad meal or bad service yet.

Hunting for a good place just isn’t an issue here. You should make your way to Calle Loreto and check out the food offer of the many restaurants that line this narrow-pedestrianized street.

A bar I pop into whenever I have friends over is Txoko Bar in that same street. For every drink you order, you can choose a tapa from a selection written on a board and they are all very tasty.”

What is the Expat / International Community Like in Denia?

“Well, you are always going to hear English, German, French and Dutch around you even out of season, so there are quite a few of us living in and around the area, but to be honest I haven’t gone out looking for it so much.

Having lived in Spain for so many years I am comfortable in a mostly Spanish speaking environment, but it is nice to have a mix of nationalities here.

There is an activity, popular all over Spain, but lesser-known in other countries which is a big hit with many expats in Denia, and that’s Padel tennis. I take classes and play at Padel Indoor in the neighboring town of Ondarra (10km / 12 mins by car). English is spoken by the staff too when needed. You can play there all year round, receive great classes and meet a nice mix of locals and foreigners.”

If you are from the USA and thinking about moving to Spain, also read: What I Wish I Knew About Moving to Spain as an American

Any Tips for Moving to / Living in Denia?

“You’ve probably guessed by now that I really like living in Denia. And apart from recommending it as a place to live, it’s also a great place to have a holiday home, or hell, just come and stay a few days in a hotel or short-term villa or apartment rental.

Here are a few things to keep in mind if you were thinking of a longer stay: You will need to be mobile. Denia is not so small, but it’s no city and you may feel the need to get explore the surroundings.

Car rental is always an option, but out of season don’t expect to be able get a same day booking in Denia. If you like to do spontaneous things that require jumping in the car and going for a drive, this could be more difficult without your own set of wheels. For rentals in Denia out of season you may need to book a week ahead. Many visitors therefore choose to rent a car at the airport which also often gives much better rates than renting a car in Denia.

The tram line that will eventually connect Denia to Benidorm (and from there to Alicante), is still unfinished and by all accounts will be a slow alternative for traveling down the coast.

Denia has pretty much everything covered from supermarkets to sports centers, nightlife, the quiet life, and medical facilities and is only an hour’s drive from Valencia and Alicante and their international airports and high-speed train connections. The ALSA coach company offers frequent service to both cities.

The cost of living in Denia, and on the Costa Blanca in general, isn’t the lowest you can find in Spain, but it’s not bad either. And from a rental perspective, I have found apartments here are twice the size and half the price as those in Madrid.

Bear in mind though that a lot of properties here don’t include heating, however, air-conditioning is abundant. Honestly, I have been through two winters in Denia and have got by with just a couple of electric plug-in radiators and a fan heater. Hot water is either electrically heated or with a butane gas heater, which may sound a bit old fashioned, but as a gas bottle for me can last up to 4 months and costs less than 18€, I’ve never had such cheap energy consumption.

To get an idea of property prices, both to rent and to buy, check out Idealista.com, which is one of the main property portals in Spain.”

Tip: If you are thinking about living in Denia, also check out this article about expat life in Moraira, another beautiful town on the Costa Blanca

Is There Something You Just Have to See or Do When You Are in Denia?

“I recommend a visit to the castle on the hill. It is mostly exterior walls but does have a small museum and a coffee shop. You can buy a guide pamphlet in different languages, but most signage around the castle is in Valenciano. The best aspect of the castle is its magnificent 360º views all over Denia.

Enjoy the summer sunset on the beach, from the water, with the silhouette of the mountains in the background.

Explore all the little back streets of the town and have a coffee or beer at any of the marina bars.

Walk out to the end of the harbor walls and watch the ferry come in or go out.

Find the tunnel below the castle and cut through to the other side of town.

Jump in the car and go explore the Cuevas de las Calaveras, caves located less than 15 mins away and open every day of the year.

On another trip drive the winding road between Denia and Javea and try to find the windmills of Javea (Molinos de Javea) or drive out to the lighthouse at Cabo de San Antoni and enjoy the views looking back to Javea.

I could go on, but I hope you are getting the idea that Denia is a good place to be and this expat is definitely happy here.

Also, if you like the water, there are a lot of water-based activities here, including boat rentals, padel boarding, kite surfing, windsurfing, and kayaking. And you can even island hop and catch the Balearia Ferry to Ibiza directly from Denia.

If you are thinking of moving to Denia, I’d suggest you try it out of season to see if it has enough life for you.

Explore the surrounding areas and make sure you try the Gamba Roja (Red Prawn)!!”

Check out Steve’s website to find out more about what he does and how he can live in Denia while working online as a teacher.

Denia is a coastal city on the Costa Blanca, located between Valencia and Alicante.

The small city that in many ways feels more like a town is set in a bay on the Mediterranean coast, at the foot of the mountain range Montgó. It has almost 20 kilometers of coastline and a great climate year-round.

Denia is a popular tourist destination in summer yet has largely conserved the ambiance of a typical Mediterranean coastal town.

From Denia’s port you can take ferries to the Islands of Ibiza, Formentera and even Mallorca.

If you are interested in this part of Spain, also read:

Like this article about expat life in Denia? Pin it! 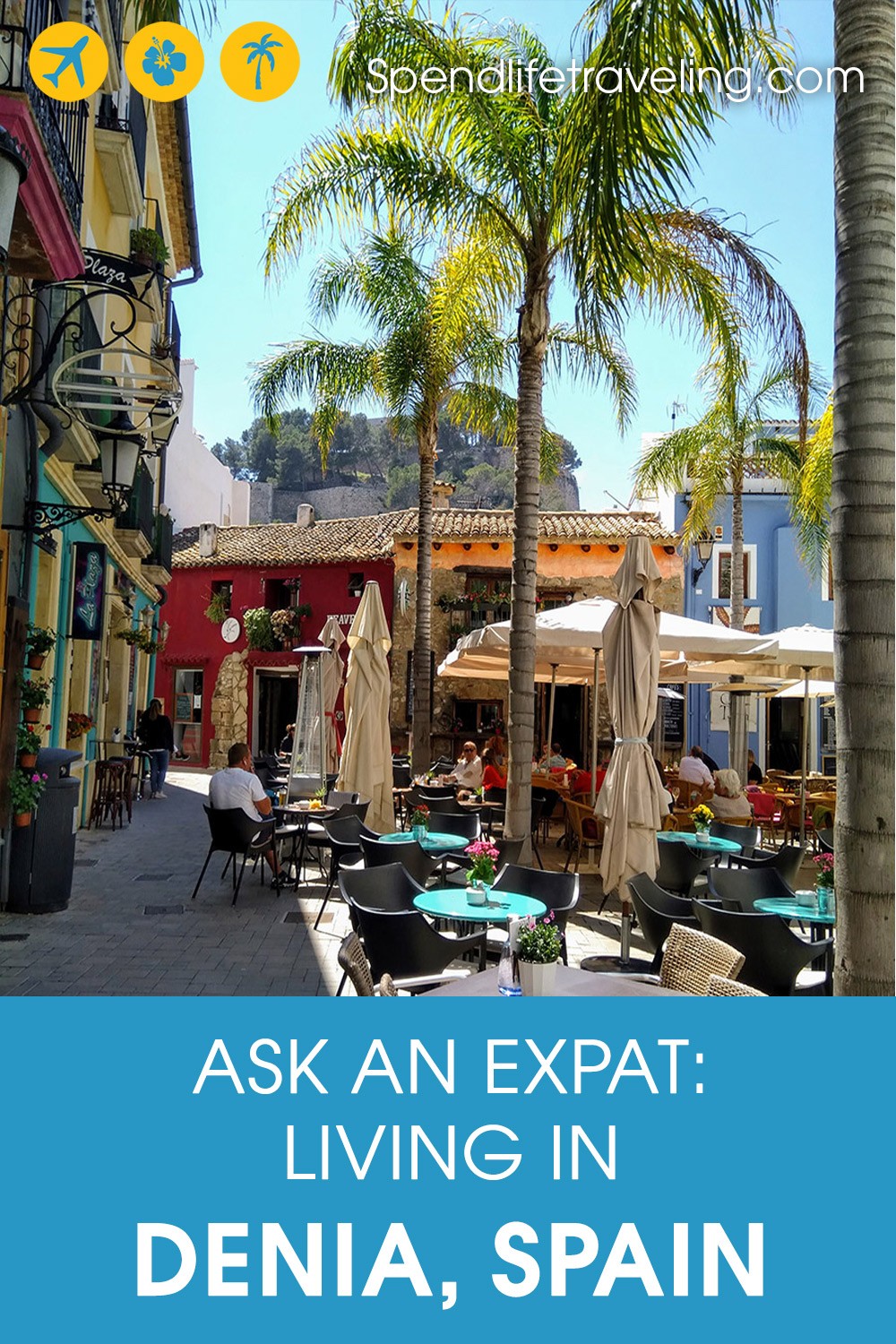