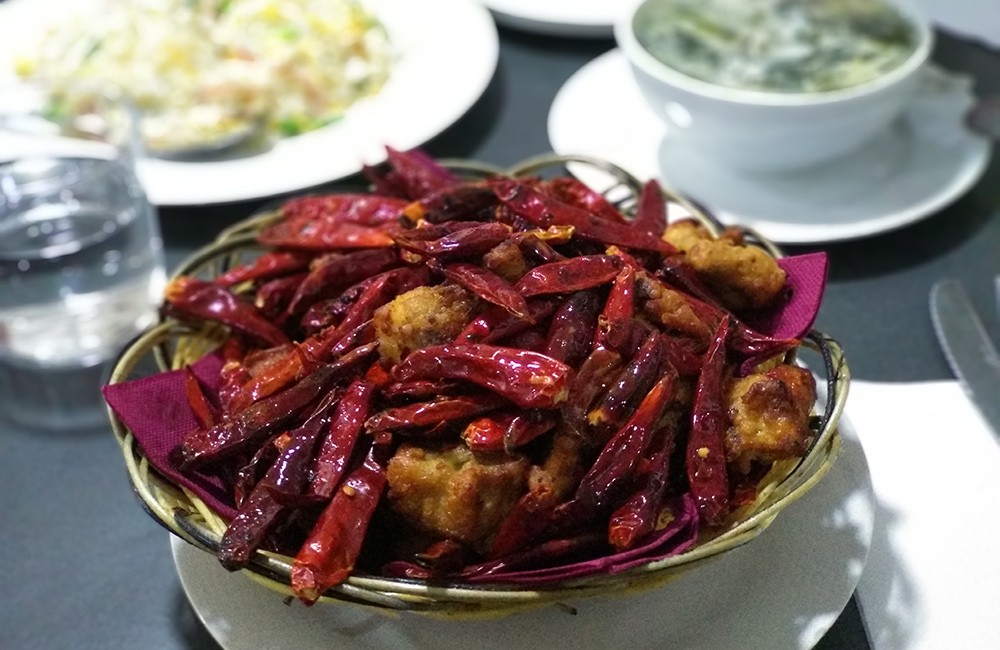 If you are looking for an authentic Chinese restaurant in Valencia you have to go to Chinatown.

Exit left from any train pulling into Valencia’s Estación del Norte, cross the parking lot where the taxi drivers wait, and in 30 seconds you’ll find yourself in the heart of Valencia’s Chinatown.

And although no one in Valencia actually calls this area “Chinatown,” a Chinese neighborhood has clearly emerged on the southern edge of the city center.

That’s not surprising. There are about 100,000 foreigners living in Valencia today, and people from China comprise the third-largest subgroup.

In this part of town, you will find Chinese travel agencies for locals who need to book a visit home. There are Chinese hair salons and barbershops. There are Chinese grocery stores. And there are authentic Chinese restaurants with region-specific menus.

That last point is important, especially in a country where foreign cuisines often get filtered through local tastes.

So, I spent most of the past month trying as many of those restaurants as I could, in search of the best Chinese restaurant in Valencia.

Below are some of their specialty dishes, as well as other recommendations I’ve come across.

1. The Peking Duck at Pato Beikin 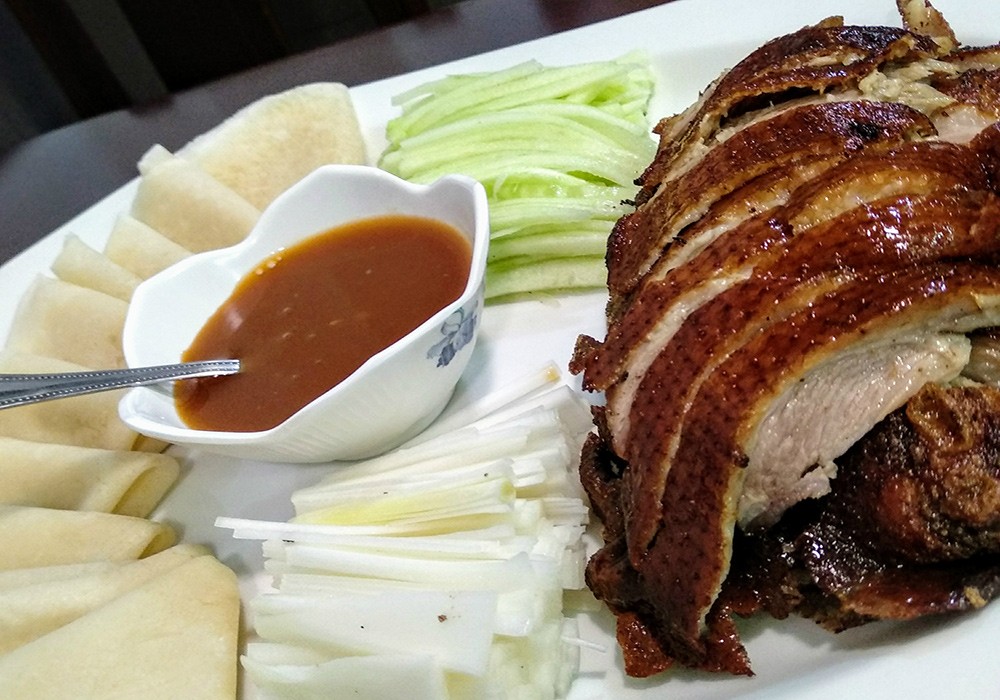 Everyone who has spent time in another country has at some point felt deeply out of their element. This meal, weirdly, was one of those moments for me.

Although Peking duck (pato Pekín in Spanish) is one of China’s most famous dishes, I’d never tried it before. Duck’s not something I order often. So, going in I felt a little apprehension.

It didn’t help my apprehension when I arrived to an empty dining room. To be fair, it was around 7:00 p.m., which is early for Spanish diners, even on a Monday.

The chef and the server, an older couple, were seated at a table when I walked in, and I was conscious that I’d made them start their workday a little early.

I got through my order in semi-confident Spanish when a Chinese group of five walked in and sat at the table next to mine. They appeared to be two young couples, one with a toddler, and they were clearly regulars if not family members of the staff.

I was relieved not to be the only diner in the room, and I was especially relieved when the server brought out a Peking duck for their table, too.

In those moments when you’re really, really feeling like a foreigner, it’s nice to have your decision affirmed by locals, even if you’re just ordering a plate of duck — which turned out excellently, by the way. The meat was tender and not excessively fatty.

Tip: The Peking duck is intended for two people. If you’re two people, split the dish, and get one smaller item.

Before drinks, that meal will be about 8 euros per person. 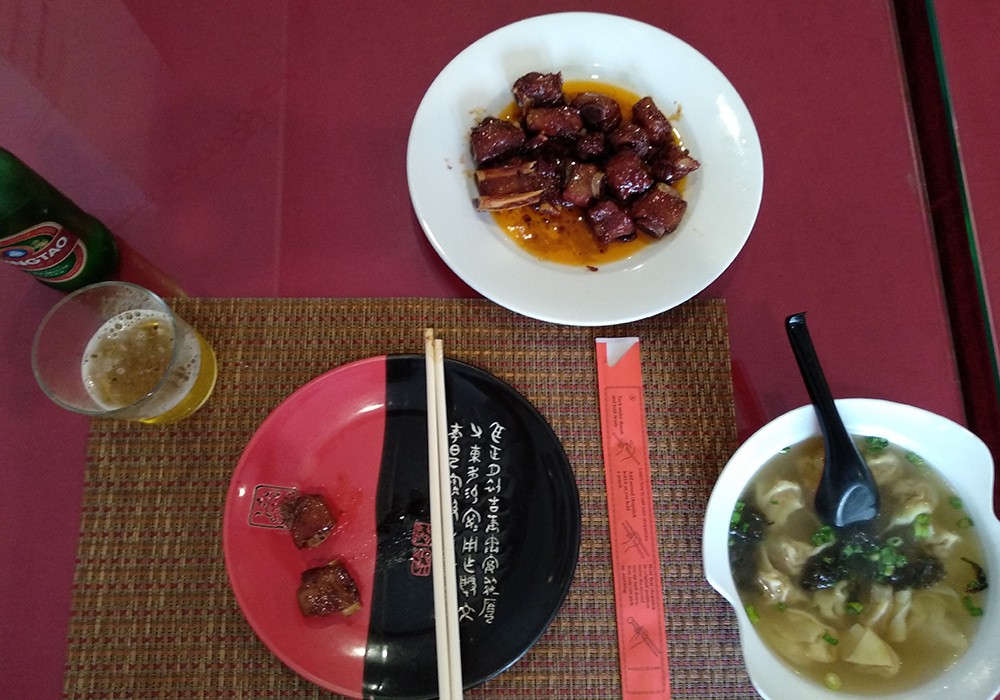 Being the only diner in the room isn’t always an awkward experience. Restaurante Chang Fu, just on the corner beside the train station, is open from 11:30 a.m. until midnight every day, and its staff seems pretty accustomed to handling diners at off-peak hours.

The staff also seem pretty accustomed to helping foreigners navigate the menu. Rather than ask for my order, the server just said: “Would you like the ribs? They’re very good.”

The tangy sauce covering them went down nicely with a bottle of Tsingtao, and at 6.50 euros the plate of ribs makes for a hearty, not-too-expensive meal.

Tip: This is a good restaurant in Valencia to have saved in your phone if you aren’t used to Spanish dining times.

Many restaurants in Valencia won’t serve dinner until 8:00 p.m. at the earliest, and it’s a bummer to have to grab fast food or greasy tourist tapas when you’re hungry before that. 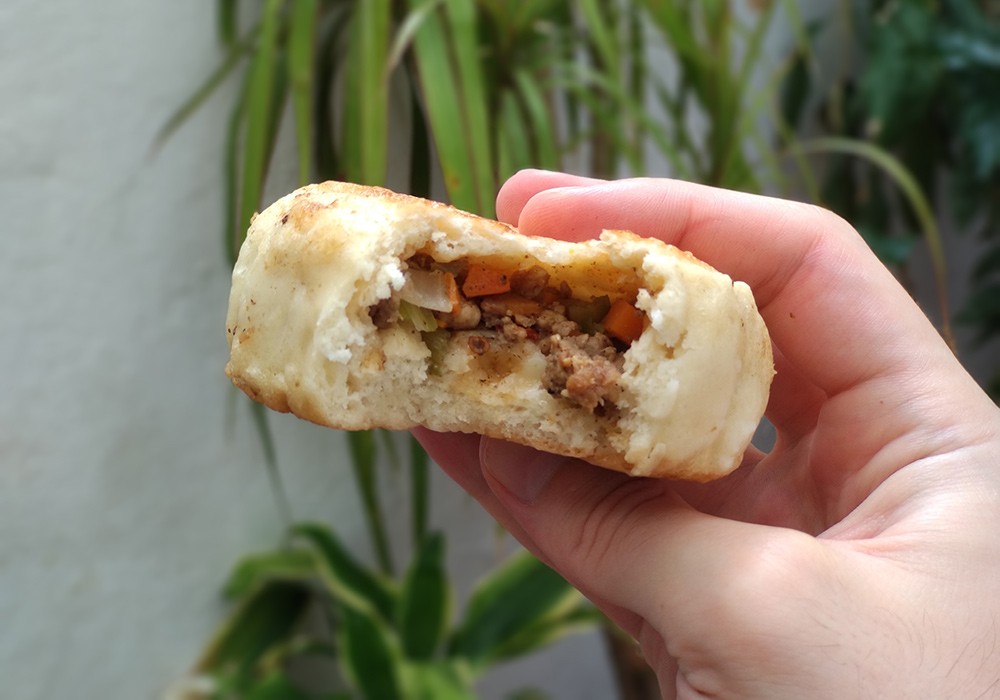 On most Friday and Saturday evenings, Felisano is heaving with high schoolers. Many of them appear to be children of Chinese families that moved to Spain, and they casually switch between gossip in Spanish and food orders in Mandarin.

Mostly, though, they’re slurping bowls of noodles and playing on their phones. It’s an important reminder of what unites all of our cultures: Aloof teenagers and a love of comfort food.

Skip the noodles and instead load up on baozi, those little meat-filled buns that made Momofuku in New York famous a few years ago.

Felisano’s bao are less ambitious than Momofuku’s: You can get the buns fried or steamed, with pork, with beef or with vegetables.

They’re way less expensive, too. I usually get two baozi when I go, and they ring up for 1.70 euros.

Tip: Felisano is a walk-up counter with limited seating and limited room to queue. I like to get my food to go and have cash ready so I can get in and get out quickly.

Felisano is a great choice if you are looking for good, cheap Chinese food in Valencia.

I talked a friend into joining me for this one. We ordered a vegetarian hot pot, and the server was excellent about double-checking our spice tolerance before sending the order to the kitchen.

She was also great about making sure the vegetables and the noodles cooked properly (and about tut-tutting us when we tried to pick food out of the broth before it was done cooking).

I found the hot pot itself to be just OK. One local blogger, however, gave the dish a resounding thumbs down. In hindsight, the dish itself wasn’t one of the highlights of the dinner. The conversation, the numerous bottles of Tsingtao and our slapstick attempts at not spilling chili broth were.

Tip: This was the first of two dishes that I managed to get all over myself during my tour of the Chinese restaurants in Valencia’s Chinatown. If you go, don’t wear your nice white shirt! 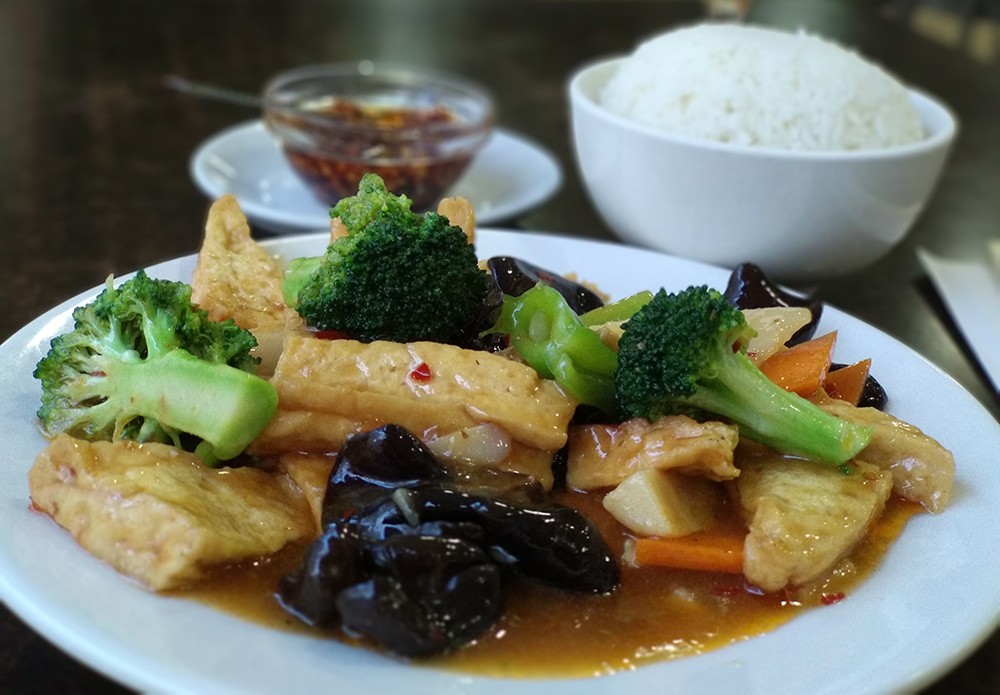 “Be careful,” was the server’s grave warning as he put the ramekin of chili sauce on my table. “It’s very spicy.”

Chinese restaurants actually offer some of the best vegan options in Valencia, and I had been told that Frenazo’s fried tofu was the best in town.

So, I thought this would be a good opportunity to try a tasty cruelty-free dish.

And while the tofu was fried to the perfect consistency, I was craving just a little more flavor. After a bite or two, I flagged down one of the three servers — all younger dudes who were joking around by the counter — and asked for chili sauce.

I was surprised when the server’s demeanor changed so abruptly when he brought the sauce over.

I thought I’d play it conservatively and just add a teaspoon. Two Coke Zeroes and a stifled coughing fit later, it was clear that even a single teaspoon was too much spice.

Still, this was an excellent meal, especially for the price. The tofu was 4.50 euros, and a side of rice was 1.20 euros more.

And, also because of the atmosphere at Frenazo’s, this could definitely be one of the best Chinese restaurants in Valencia.

By the way, this was that second dish I ended up wearing home. If your chopstick skills are shaky, maybe approach this one with a fork.

Tip: I often see a line out the door at Frenazo on the weekends, especially during the 2:30 p.m. lunch rush. You might need to go during off-peak hours to guarantee yourself a table. 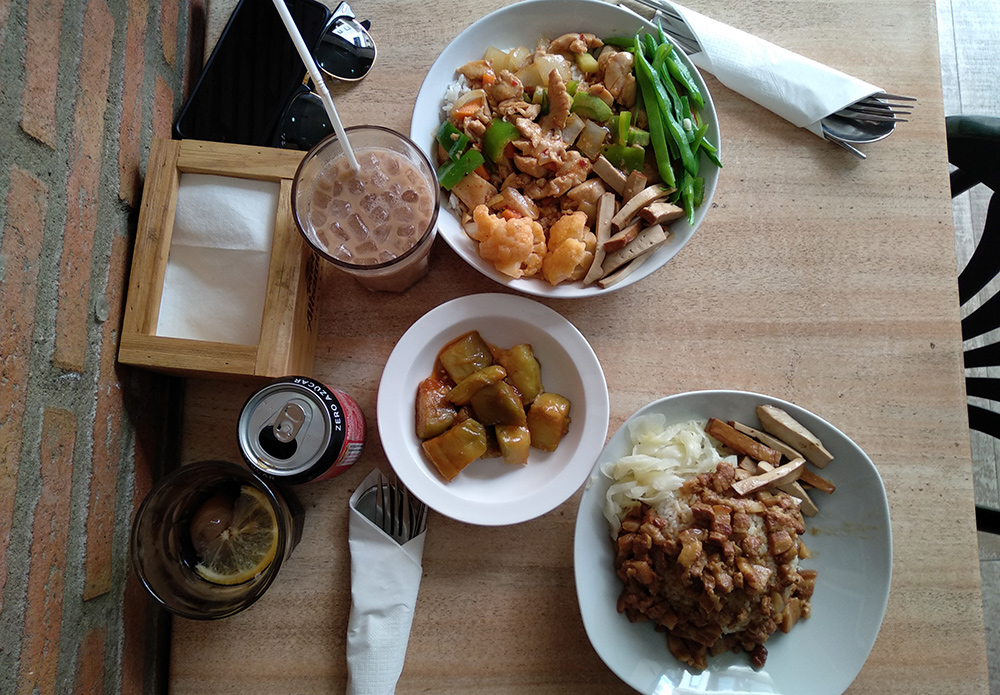 Casa Táfu probably has the shortest menu and the friendliest service out of all the restaurants in Valencia’s Chinatown.

A friend and I arrived on a weekday just after noon, and we were greeted by a cheerful woman who, in a combination of Spanish and English, walked us through the menu.

The cuisine here is Taiwanese, and the signature dish, lu rou fan, is a staple of Taiwanese comfort eating.

The dish is simple enough: Braised pork belly in a thick sauce, served over white rice. Some recipes call for a hard-boiled egg on top, but the house dish did without. That’s OK, too, because the pork and rice are more than enough food for a hungry person.

Admittedly, I didn’t love the dish. The chicken kung pao, the top dish in the photo above, was way better. But the lu rou fan is cheap, filling and served with a smile. If you go, it’s at least worth a shot.

Tip: Casa Táfu is only open from noon-ish until 5:00 p.m. Monday through Saturday. Have a hearty lunch here, and you won’t need more than a light dinner later.

7. The Empanadillas a la Plancha at Casa Wei Wei 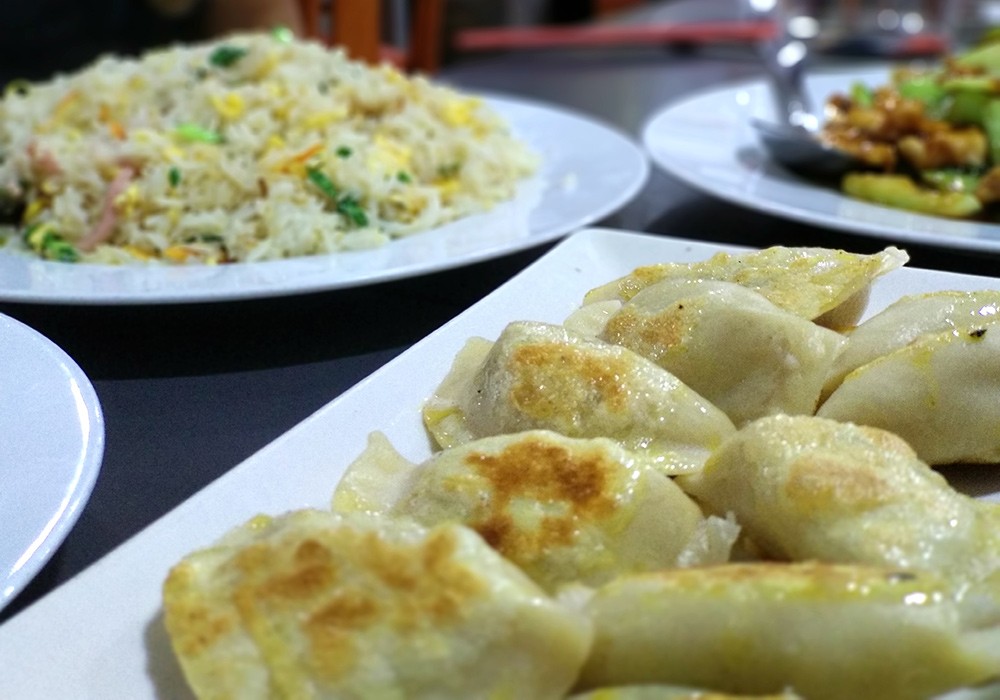 About halfway through my research for this article, I came across an excellent article in Condé Nast Traveler from Spanish journalist Macarena Escrivá, who recommended that anyone going to Casa Wei Wei try the empanadillas a la plancha, which are small seared, meat-filled dumplings served with soy sauce.

Great recommendation. These were probably my favorite dish on this whole list. We were a group of four on a Friday night at Wei Wei, and the empanadillas got praise from around the table.

Tip: You’ll probably see a few people order the Chongqing-style spicy chicken. It’s served in a basket and covered in dried chili peppers. Skip it. It looks cool, but there’s so much bone in each bite that you’ll spend the entire meal spitting into your napkin.

Note: If you look for Casa Wei Wei on Google maps you will find two options: ‘Restaurante Casa Wei Wei’ and ‘Wei Wei’. It’s the latter.

See the map at the end of this article for the correct location of all the Chinese restaurants I recommend here.

Tips For Exploring Valencia’s Chinatown and These Chinese Restaurants

The neighborhood is an easy walk from anywhere in Valencia’s Old Town. If you’re farther out, you can take metro lines 1, 2, 3, 5 or 9 to the Xàtiva stop.

Also Read: How to Use the Metro in Valencia the Cheapest and Easiest Way

To the right of the train station, if you’re facing it, there is an eight-block strip through which the streets Pelayo, Bailén and Convento Jerusalem run parallel. You’ll see that most of the shops and cafes have signs written in Mandarin or Cantonese.

Here’s one more local tip: If you speak some Spanish and try to ask for directions, you might get yourself into trouble if you would ask where the barrio chino (Spanish for ‘Chinese neighborhood’) is.

That’s the nickname given to a notorious section of the Old Town, just west of the Mercat Central. The area is also known as Velluters to many locals and listed on Google Maps today as El Pilar.

Since at least the 1950s, Velluters had been home to the city’s red light district.

Within the last decade, that barrio chino became a target for development thanks to its central location, and the brothels gave way to tourist apartments and cafes.

Around that same time, new Chinese businesses began to open up shop in the blocks beside the Estación del Norte (the central train station), and that’s where you want to go for the best Chinese food in Valencia.

Map of The 7 Recommended Chinese Restaurants in Valencia’s Chinatown

Like this article about authentic Chinese food in Valencia? Pin it! 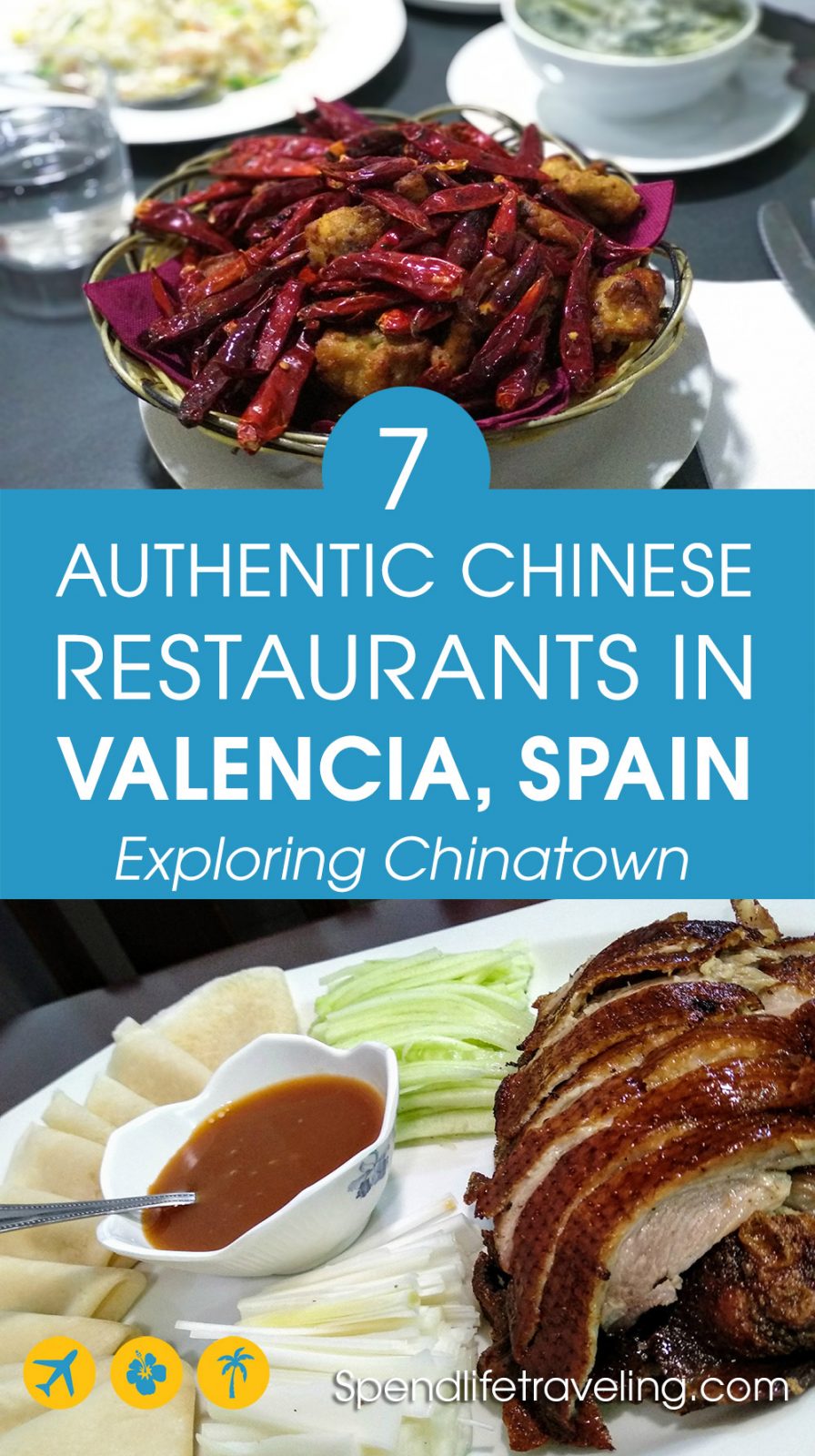