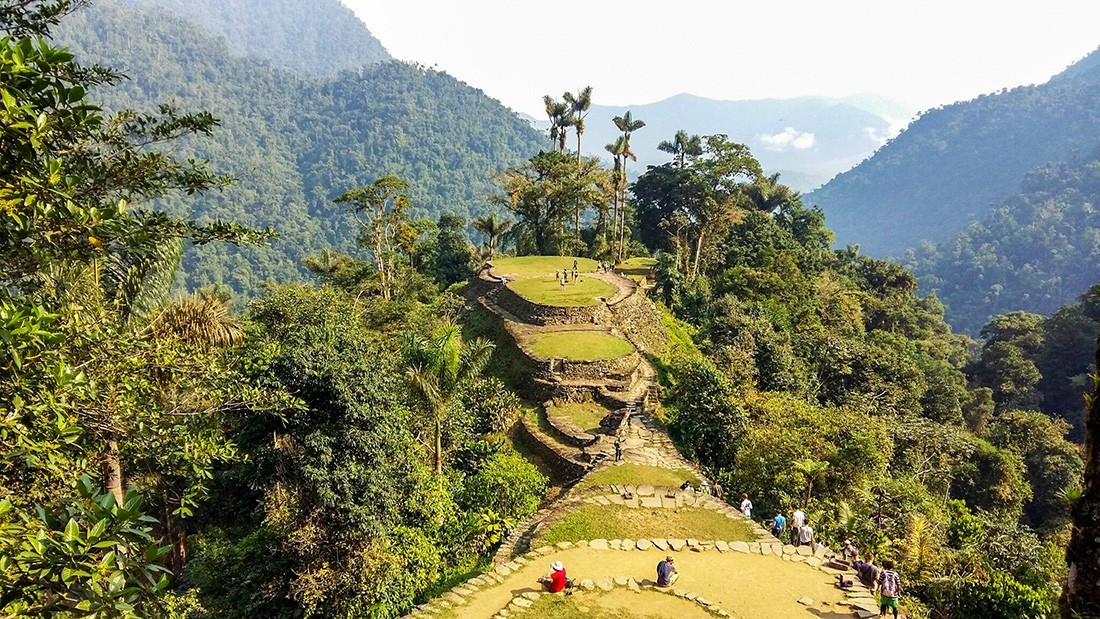 The Lost City Trek in Colombia

Sweat dropped from my eyelashes onto my sunglasses, obscuring my view. I could not remember ever having been this hot.

Ten metres in front of me, José-Luis, our indigenous Wiwa guide did not seem bothered by the heat at all. He kept running up the hill as if this was a walk in the park, not the beginning of a five-day hike that would take us to the Lost City.

Located in the Sierra Nevada in Northern Colombia, the Lost City (Ciudad Perdida in Spanish) was built by the Tayrona people from the 7th century on, some 650 years earlier than Machu Picchu.

Not much is known about its history. When the Spaniards arrived, the indigenous population abandoned the city and destroyed all of the paths leading there. It wasn’t discovered until the 1970s, when looters came across it and started searching for valuable artifacts.

These days, the Lost City is one of Colombia’s most remote, yet at the same time also most famous, tourist attractions.

Since it can only be reached on foot, visitors do not have a choice but to trek here. To make things easier for you, I have put together this guide with everything you need to know about hiking to the Ciudad Perdida (Lost City).

Before You Start Your Lost City Trek 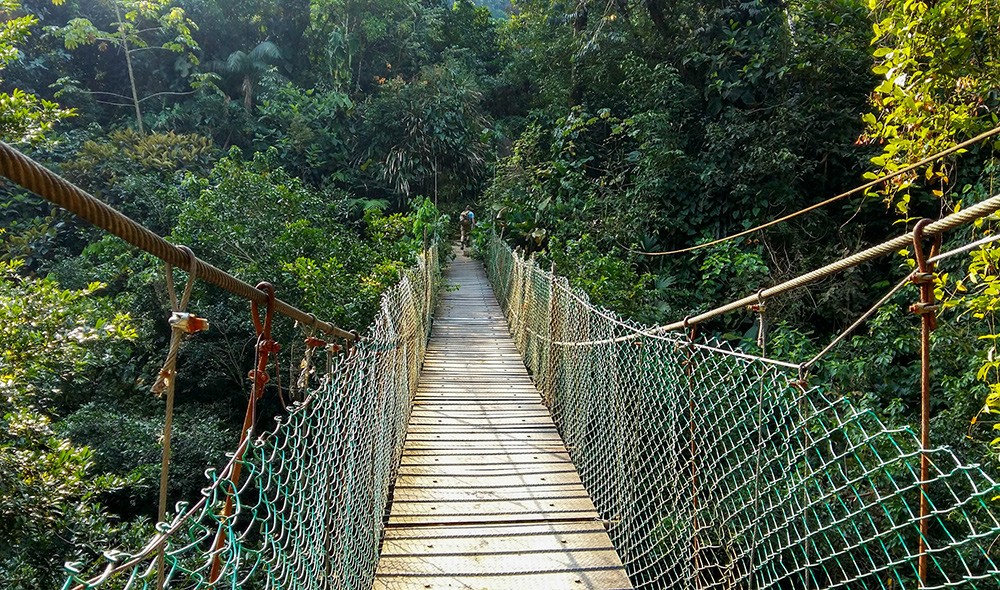 At the moment, the Lost City cannot be reached independently. All travelers have to go on this track with a licensed tour operator.

There are five companies that can take you there and all are based in the coastal city of Santa Marta (which can easily be reached by bus from Cartagena or by plane from Bogota, Medellín and other destinations).

When choosing a tour operator, make sure to ask a lot of questions. Here are a couple of things you might want to consider:

I went with G Adventures, who cooperate with Wiwa Tours. We had two tour guides, one from G Adventures and one from Wiwa Tours, who belongs to the indigenous Wiwa community. I got to learn about his culture and traditions along the way, which was a great bonus.

2. Choose the Length of the Trek 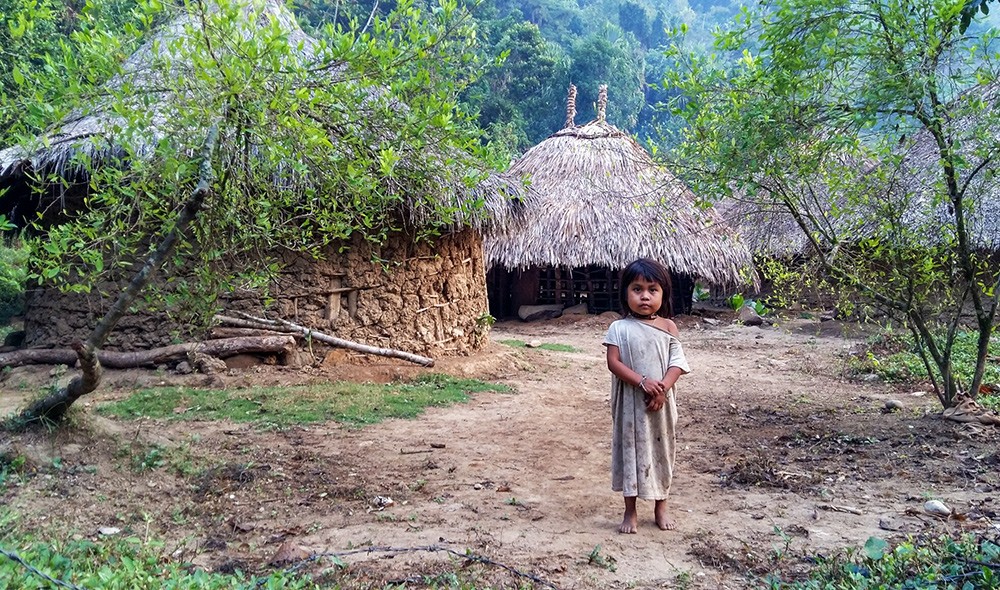 Once you have chosen your tour company, you need to decide on the length of your Lost City trek.

The minimum is four days, the maximum is six days.

If you go for four days, you will have four long days of trekking. The five-day treks break up the way back, so you can take more time and rest or swim in waterfalls. The six-day treks will give you lots of time to enjoy the jungle.

I did five days and personally, I think that is the best option. Four days can seem rushed whereas six days are too long.

At the end of day five, I was more than happy to leave the jungle and take a long shower in our hotel room to wash that mixture of sweat, DEET, sunscreen lotion and dust off my skin. 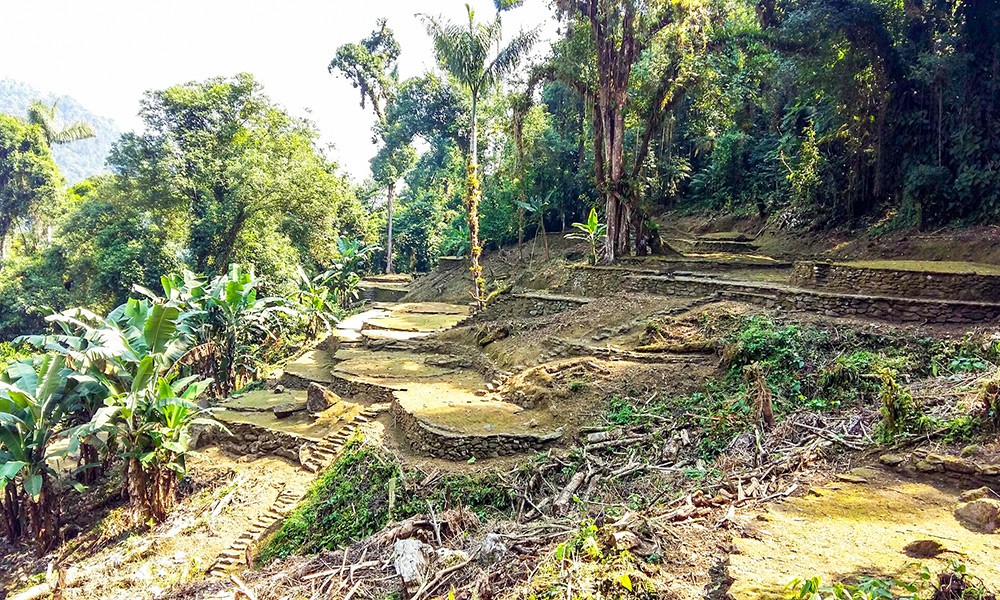 The Ciudad Perdida can be visited almost year-round.

In September, it is closed for reparations and also for a cleansing ceremony by local people, for whom this is a sacred place. That period of closing used to last for two weeks, but after the Lost City got hit by a hurricane for the first time in 2017, it closed for a whole month.

Ask the tour operators, they will know when and for how long the site is closed exactly.

The hike to the lost city can be done both during the dry and the wet season. Dry season lasts from December to March and means less rain and lower water levels. The trek includes a couple of river crossings. In high season, the water can reach up to your chest whereas when I went, in March, it did not even go up to my knees.

4. What to Pack for the Lost City trek 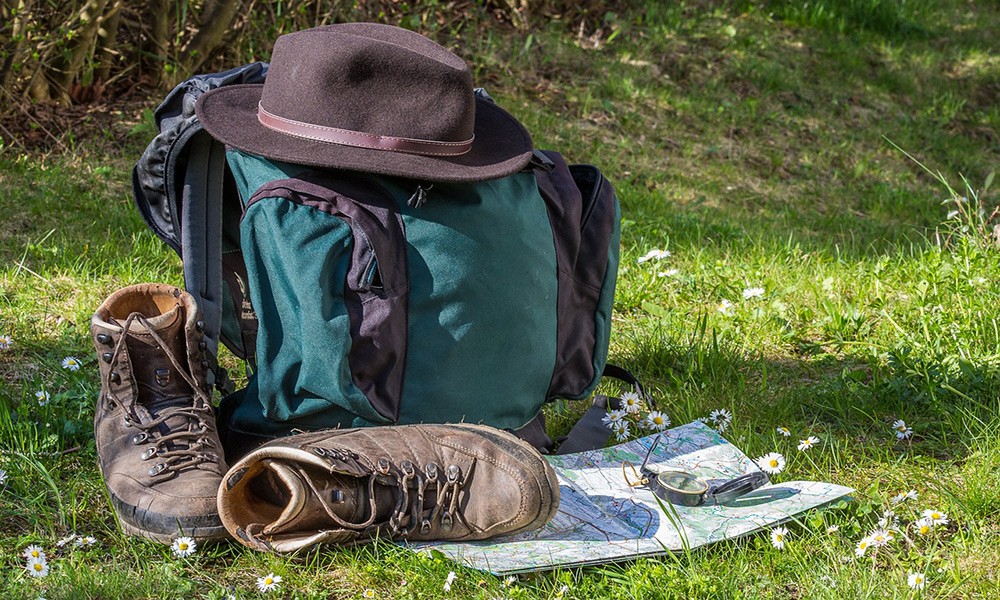 Now that you have decided on your tour operator, the length of the trek and have set a date on which to go, you need to pack.

You have to carry your own luggage, so make sure not to take too much. The trek is already exhausting enough without having to carry useless items.

Here Is What I Packed for Hiking to the Lost City & What I Recommend:

On the Lost City Trek 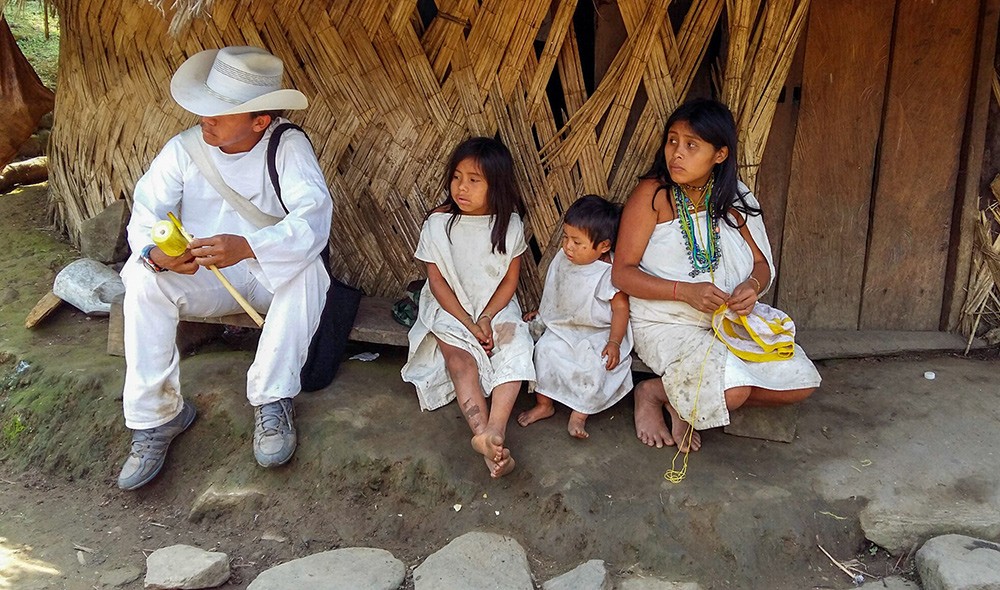 I have decided to not break this down into a day by day itinerary as, depending on your tour operator, this will vary.

Instead, I am going to provide you with the approximate information that you need, so that you have an idea of what to expect.

The hike starts in the small town of Machete. It takes about two hours by jeep to get there.

If you leave Santa Marta early in the morning and it is a very clear day, you could be lucky and get a view of the snowy twin peaks of the Sierra Nevada on the way to Machete. They play a huge role in the life of indigenous tribes who believe that this is where their gods live (fun fact: their white clothing represents the snowy peaks).

From Machete, you start walking uphill. The first part of the trek takes you through farmland with barely any cover, so make sure to put on sunscreen and stay hydrated.

Depending on where you spend the night, you will either have another downhill and uphill ahead of you or you will have to conquer the next hill in the morning.

On the afternoon of the first day or the morning of the second day, you will reach the jungle. From there on, you have more cover from the sun, but the trail remains a constant up and down. There are barely any flat parts and the heat makes hiking especially difficult.

You’ll come past a local Kogui village and after a couple more up- and downhills, you will have to do your first river crossing. Depending on the water level, this can be very easy or challenging.

The good news is, shortly afterward, you will reach the Paraiso campsite, which is the base camp for the ascent to the Lost City.

Depending on your tour operator, you’ll see the Ciudad Perdida on the afternoon of day two or on the morning of day three.

To get to the Lost City, you have to once more cross the river and to climb up 1200 steps. Leave everything you don’t need at Paraiso – you will return the same way.

After spending some time in the Lost City, you have to walk back down. The way back is exactly the one that you took to get there. Every single downhill is now an uphill and vice versa.

Depending on the length of your trek, you might have half a day to rest and swim in a river or waterfall.

2. Accommodation During the Lost City Trek 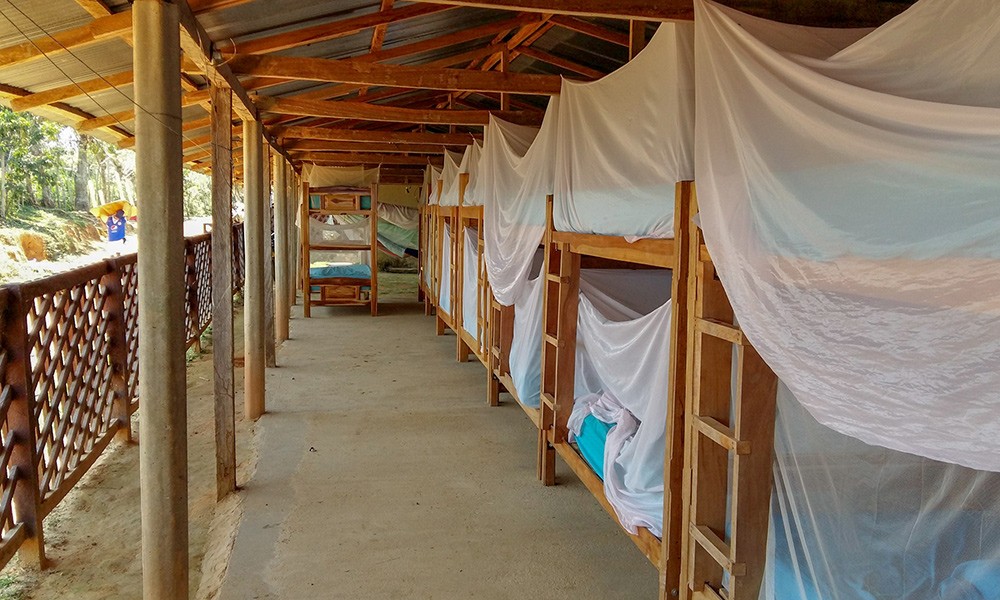 All accommodation along the trek is basic, with shared showers and toilets. You will either sleep in a bed or in a hammock, depending on availability.

Some beds had blankets and pillows on them, others didn’t. If you are missing them, ask your tour guide and he can organize them for you. The nights can be colder than you think, with humidity creeping in.

When sleeping in a hammock, you need to completely wrap the blanket around you or your back will get cold. At the same time, you need to balance so you don’t fall out of the hammock. It takes a bit of practice but it’s not impossible. Good luck!

Oh and for the workaholics and internet addicts amongst us: you won’t find wifi on the Lost City trek and there is no cell phone reception so you will be going off the grid for a few days!

3. Food and Drinks on the Lost City Trek

As mentioned above, the meals you get while trekking to the Lost City are included in the package.

Since all food has to be transported by mule, they are usually simple dishes, while at the same time tasty and filling.

Our cook trekked with us, running ahead of us every day to make sure she could start with lunch and dinner preparations before we arrived.

Besides breakfast, lunch, and dinner, we also got a small snack box every day and had various stops along the trail where we ate fresh fruit. A hot drink was included for dinner and we could refill our water bottles at the camps.

Along the way, you will find many shops that sell drinks; usually water, Gatorade, coke, and beer. Prices increase as you get closer to the Ciudad Perdida. But, considering that everything has to be transported by mule, they are still reasonable.

The Lost City Trek: Summing it Up… 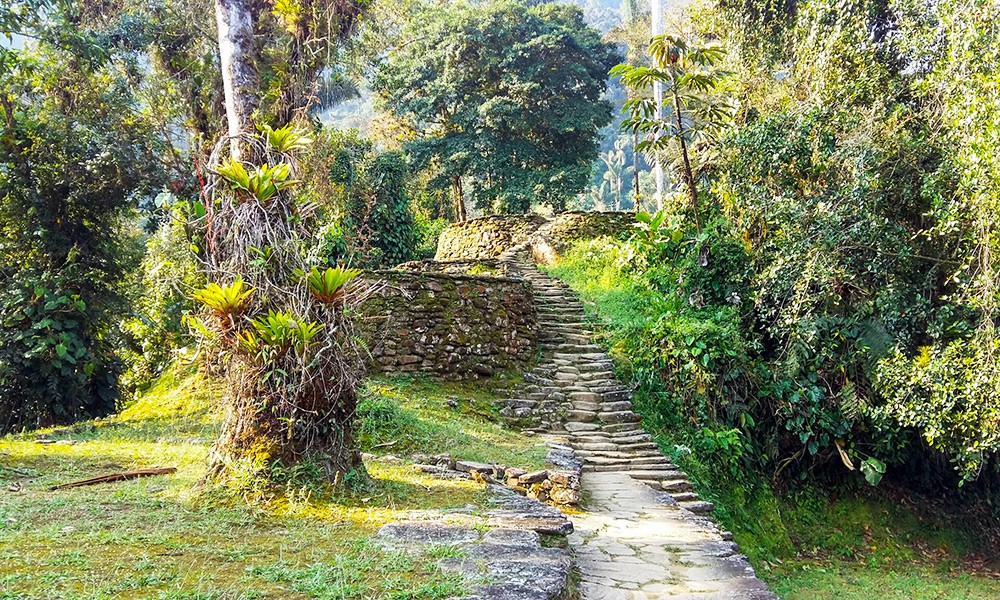 The Lost City trek is a lot of fun.

Expect to get sweaty and muddy along the way, and to fall asleep at nine at the latest because you are too exhausted to stay awake. In return, you get to experience Colombia’s jungle, the indigenous cultures and, of course, you get to see the remains of a large Tayrona city.

Don’t worry too much. The hike might be exhausting but many have done it before. And if you really feel you can’t do the hike, you can always hire a mule to take you there and back again.

I hope you will enjoy the Lost City Trek as much as I did!

Like this article about what you need to know before trekking to the Lost City? Pin it! 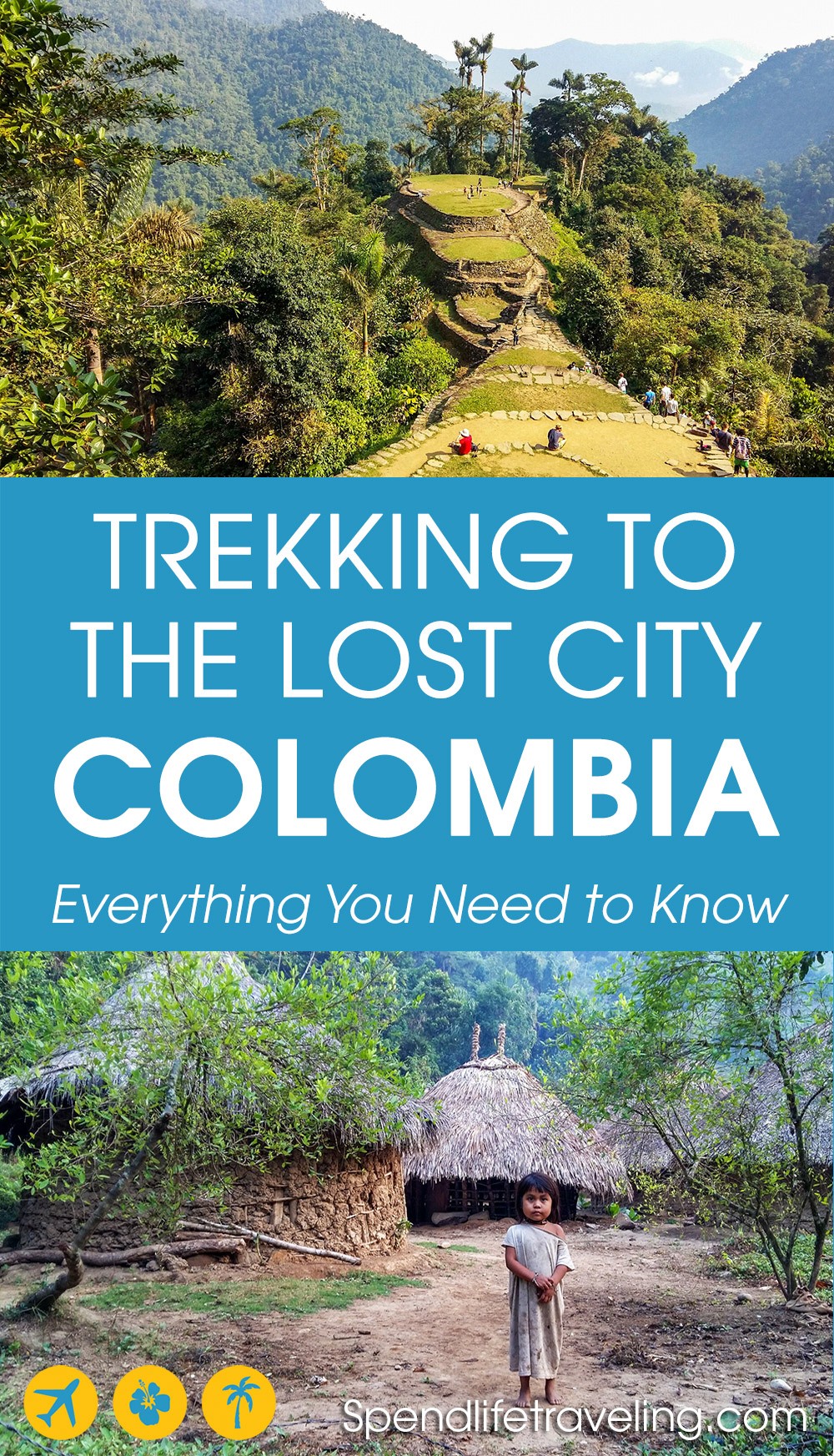