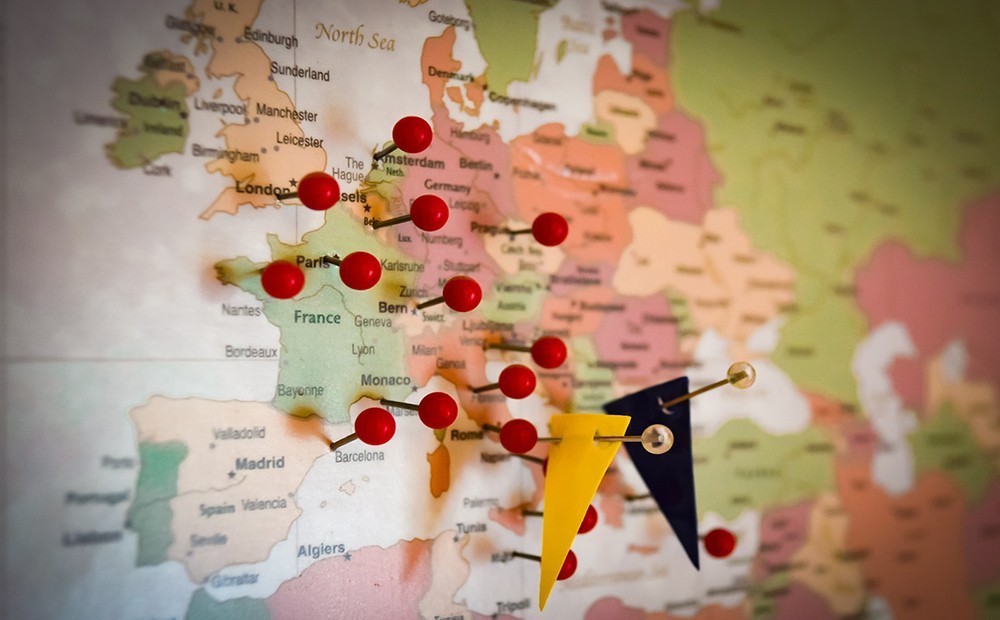 Are you traveling to Europe for the first time? I’m sure you’ll love it!

You’ve probably gone through many travel sites already, trying to get the insider information on where to go, what to see, and how to budget so you can maximize your experience.

Trusting in someone who’s either a native or has lived extensively in Europe is one of the best ways to negotiate such a major undertaking.

However, no matter how much research is involved, Americans are often surprised by some major differences in European countries compared to “back home.”

In this article I want to highlight some differences between Europe and the US and some things that might affect your trip. I hope this will help make you first time in Europe a great experience!

10 Things to Know Before Traveling to Europe as an American

1. Most Cars Are Manual

Renting a car is a great way to get around Europe, especially if you’ll be in countries where you’re still driving on the right-hand side of the road.

However, the vast majority of cars in Europe are a manual transmission.

This can be troubling for younger travelers who may have never even seen a stick shift.

You don’t want to try and learn when you’re abroad. If you can’t find an automatic rental, stick with other forms of transportation.

Also Read: Tips for Driving Abroad for the First Time

2. The Dollar is Weak in Most Parts of Western Europe

When you’re dealing with euros and pounds, it’s easy to be tempted to think of it as a straight exchange—after all, the numbers are somewhat close.

Doing this can be a huge mistake when you actually check your bank account or credit card.

Unfortunately for us Americans, the dollar is relatively weak, and it’s easy to overspend.

3. You May Be in Countries With Multiple Voltage Requirements

When buying a voltage converter for your laptop, phone, charger, etc., remember that there are two types of converters.

Some converters solely make it to where you can plug in the device, and some converters actually change the voltage. You’ll want the latter.

Find out what each country requires (a simple Google search will give you that information) and seek out converters that are as multi-use as possible. They will be more costly, but well worth it.

Also, keep in mind that there’s some wiggle room with voltage. As long as you’re within ten volts, your tech will be safe.

4. Elevators and Other Basics for People With Disabilities Aren’t Always Readily Available

Unless you seek out these accommodations, chances are you’ll be staying in hotels without elevators or find yourself struggling with public transportation that isn’t wheelchair friendly.

Every country is different regarding requirements for those with a disability. Plan accordingly.

5. Trains Are Often the Way to Go

Most Americans don’t use trains for transportation, except in some key areas. But that is completely different in Europe.

Taking a train is often affordable, accessible, and whisks you from one heart of a city to another.

In some cases, it might look more expensive than a flight at first, but dig a little deeper. Airports are on the outskirts of cities and it can be very expensive to get from the airport to where you’re staying. Plus,

trains give you the opportunity to see Europe in a different light.

If this is going to be your first time in Europe I highly recommend at least including some train travel!

6. Cash is Still Important in Europe

If we are talking about things to know before traveling to Europe for the first time, this is an important one!

It might seem like you can use a card absolutely anywhere, but that isn’t always the case in Europe.

Especially if you want to shop a little off the grid (like buying art from someone painting on the sidewalk) or find yourself in more remote locations, cash becomes important.

Carrying cash is a good idea, but avoid the costly exchange offices popping up everywhere.

Your bank at home will be able to order currency for any country you’ll be visiting for no charge. You can then exchange it back, also at no charge, when you return. Ask for small bills and make use of the safe at your hotel.

You’ll also find ATMs all throughout Europe so don’t bring too much cash as you can always take out more once you’re in Europe.

7. Global Entry is Worth It

This isn’t just for traveling to Europe, but if you’ve been on the fence about getting Global Entry, know that it’s well worth it.

For around $100 you can skip the long lines of checking into the airport and going through customs.

If you have Global Entry, you automatically also have TSA pre-check.

However, depending on where you live, it can take a while to get an appointment. Global Entry now offers interviews for US residents upon arrival from an international flight as long as you’ve completed the initial application. It’s well worth checking out.

8. You’ll Probably Tip Too Much

Tipping is expected in most European countries for similar services as in the US, but the average is lower.

In restaurants, about 10 percent is to be expected.

Americans are known for over-tipping in Europe and you certainly won’t be turned away. However, there’s no reason to be taken advantage of. Research tipping averages in each European country.

Some articles with information about tipping in different European countries:

9. You Can Save a Bundle Through a House Sharing Service

Take a look at the options on sites like Airbnb and VRBO while you’re researching hotels.

You can often get more space and a better location for a fraction of the price.

However, you won’t have certain amenities like a gym or safe (though gyms are rare in European hotels except for the most luxurious).

When I am traveling to Europe I often book a combination: a few nights in Airbnbs to save money and have access to a kitchen, and then a few nights in hotels for a bit more luxury.

10. Try to Speak the Language

Even if you only know a few phrases, attempting to speak the local language can go a long way.

It’s appreciated, and you might even get a better deal just for trying.

Thankfully however, especially in most larger cities people do speak English. So don’t worry that you won’t be able to travel around without speaking the local languages.

Traveling to Europe For the First Time

I hope these tips helped to give you an idea about what to know before traveling to Europe.

Of course keep in mind that each European country is unique.

England for example, and the English culture, is very different from Spain and the Spanish culture. So it’s worth reading a bit about the culture and do’s and don’ts in each country you plan to visit.

But no matter what European countries you are visiting I am sure you will have a great trip!

Some Final Tips for Traveling to Europe

When mapping out your vacation, keep peak seasons in mind. There might be local festivals that make prices higher, but on the other hand, those might be the exact events that will make this trip memorable.

Slow Down. You won’t be able to see all of Europe in 10 days. If this is going to be your first time in Europe, pick a handful of destinations and take your time to explore those.

You’ll need at least three nights in each major city you want to visit. And if you want to get to know a country I would say you have to visit more than just the capital city. Visit at least one or two places outside of the capital.

Whether that’s a day trip into nature or a visit to a second city should depend on your personal interests. But visiting more than just the capital will give you a much better understanding of the country and a much more diverse travel experience.

Pack light, be safe and don’t be afraid to go a little off the beaten path.

Enjoy your first time in Europe!

Like this article about things to know before traveling to Europe for the first time as an American? Pin it! 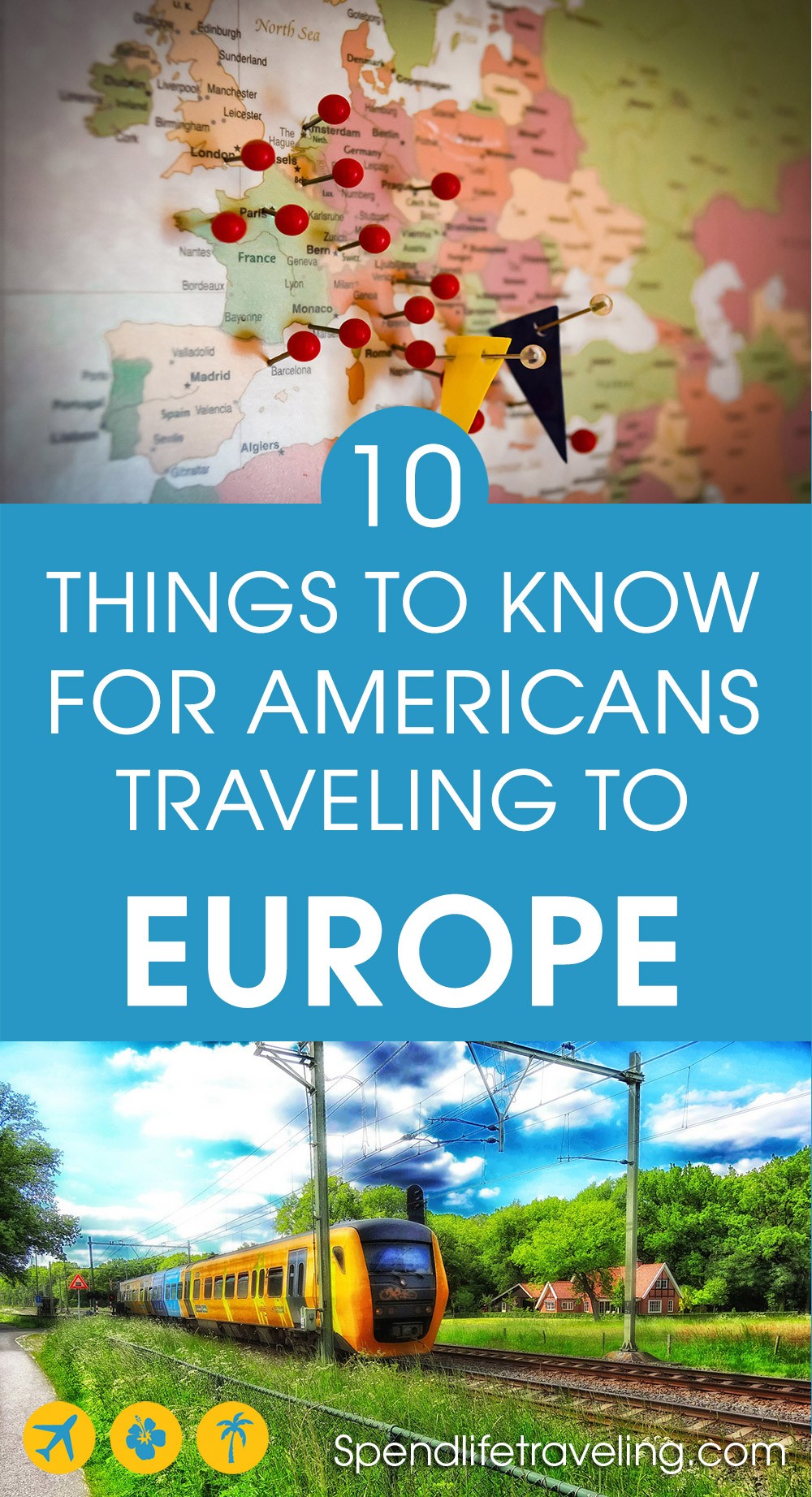 This blog about traveling to Europe as an American contains an affiliate link. I may receive a commission for purchases made through this link, at no additional cost to you.